The Bank of Japan will announce its latest decision on monetary policy this Thursday, although policymakers are not expected to surprise financial markets. The main rate is foreseen steady at -0.1%, while the focus will remain on the yield curve control, which aims to maintain the 10-year JGB yield target at around 0.00%.

Back in December, the central bank extended the deadline for steps to ease funding strains for firms hit by the pandemic. It also announced a plan to seek ways to make its policy more sustainable towards achieving their 2% goal.

Stimulus on hold ahead of vaccine distribution

Prime Minister Yoshihide Suga announced by the end of the year that the country would compile an economic stimulus package worth 73.6 trillion yen ($708bn) that will include fiscal spending worth around 40 trillion yen, to deal with the pandemic-related economic slowdown.

However, the coronavirus situation is worsening in Japan. The country reported on Monday roughly 5,000 new contagions, with serious cases nearing 1,000, putting the health system under pressure. Japan has reported a total of around 335K cases ever since the pandemic started, much better than other major economies, yet not enough to avoid an economic setback.

In this scenario, the country is awaiting vaccine distribution, announced for February. That said, it seems unlikely that the BOJ would take fresh measures. Instead, policymakers will likely wait until March to reevaluate the situation.

The USD/JPY pair has been consolidating around the 104.00 figure in the last two weeks, retaining its long-term bearish potential, despite bouncing from a multi-month low of 102.60.

Daily basis, the pair has been finding buyers around a mildly bullish 20 SMA but remains far below the larger ones, which maintain their bearish slopes. A long-term descendant trend line coming from March 2020 stands in the 104.30 price zone, while the pair topped this January at 104.39.

It seems unlikely that the pair would show a strong reaction to an on-hold BOJ. Still, if the pair manages to advance beyond 104.40, it could trigger stops and accelerate its advance. The risk will turn to the downside if the pair breaks below 103.50, the immediate support, while a steeper decline should be expected if it extends the slump below 103.10. 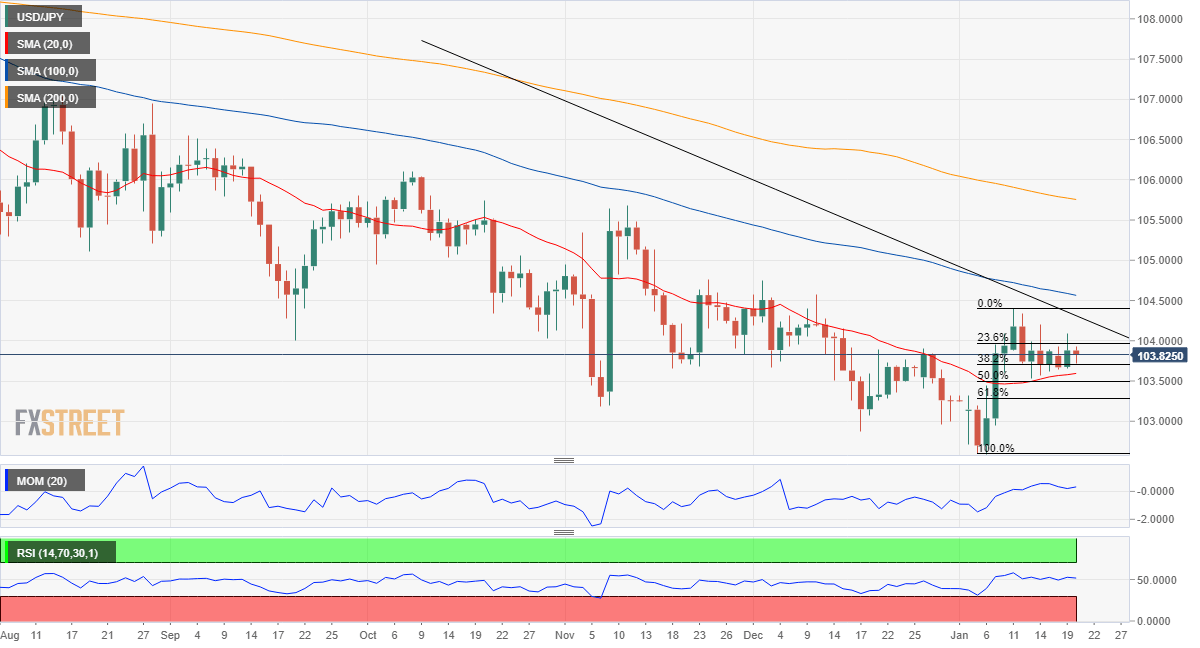