The AUD/USD pair has advanced for an eighth consecutive week, reaching 0.7819, a level that was last seen in April 2018, trading a handful of pips below that level as traders prepare for some weekend rest.

The aussie just went with the flow these days, boosted by rallying equities and persistent hopes among speculative interest, which believes that the economic chaos triggered by the coronavirus pandemic is on its final stages. On the other hand, the greenback remained pressured by a combination of factors such as political turmoil in the US and a steeper than anticipated economic setback at the end of the year amid resurgent COVID-19 cases.

True, the American currency got to advance mid-week, but in the wider perspective, the movement seems a mere correction. Besides, the market is still looking for a solid reason to return to the US dollar.

Meanwhile, the pandemic´s soft course in Australia is pretty much the same. The country reports just a few cases per day and is used to take quick, aggressive measures to keep it contained. On average, the country has been reporting less than 20 new daily cases since last December. This week, Prime Minister Scott Morrison announced that he expects to get the approval of the Pfizer vaccine by the end of January, to kick start massive vaccination in February. The country has also made an agreement with AstraZeneca and is locally producing its vaccine.

The US, on the other hand, has vaccinated over 6 million citizens, but has hardly recurred to restrictive measures and reported roughly 250,000 new cases per day this last week. On Thursday, the country reported 4,207 deaths in a single day, with the total death toll at 374K.

The market keeps ignoring tensions between Canberra and Beijing, which have been temporarily put aside in these latest shortened weeks. The issue, however, is pending over Australia like a Damocles’ sword and may hit hard the aussie at some point in the near future.

Data leans the scale in the aussie’s favor

Data wise, Australia had little to offer these days. The country published the Commonwealth Bank Manufacturing PMI, which was confirmed in December at 55.7, slightly worse than anticipated but still indicating economic expansion.  Same happened with the Services Index that resulted at 57 from 57.4 previously. The country also unveiled its November Trade Balance, which posted a surplus of 5022, worse than the 6200 expected. Exports grew a modest 3% while imports were up by 10% in the month.

The US published the official ISM indexes, with manufacturing activity growing at a solid pace, but services-related one retreating. The country also released its Nonfarm Payroll report on Friday, which showed that the country lost 140,000 jobs in December, much worse than anticipated. The unemployment rate held at 6.7%, better than the 6.8% expected.

Australia will publish next Monday the final reading of November Retail Sales, while China will provide an update on inflation.  On Thursday, Beijing will unveil its December Trade Balance, and data related to Australia may shake the aussie. The US will release December CPI figures next Wednesday,  and Retail Sales on Thursday, the latter foreseen at -0.2% MoM.

From a technical point of view, and with the pair up for an eighth consecutive week as said, the risk of a bearish corrective decline is quite high. Still, bulls retain control and higher highs are on the table.

The weekly chart shows that the 20 SMA has crossed above the 200 SMA for the first time since June 2018, both far below the current level. The Momentum indicator eased just modestly within positive levels, while the RSI indicator keeps heading higher at around 71.

In the daily chart, the bullish case is quite strong. The Momentum eases within range while the RSI consolidates oversold conditions. The 20 DMA heads firmly higher at 0.7630. The indicator stands as a mid-term line in the sand, as a retracement towards the latter won’t affect the dominant bullish trend. Below this level, the pair may dip towards 0.7500 before meeting substantial buying interest.  Beyond 0.7820, the pair has quite a clear path towards the 0.7900 price zone. 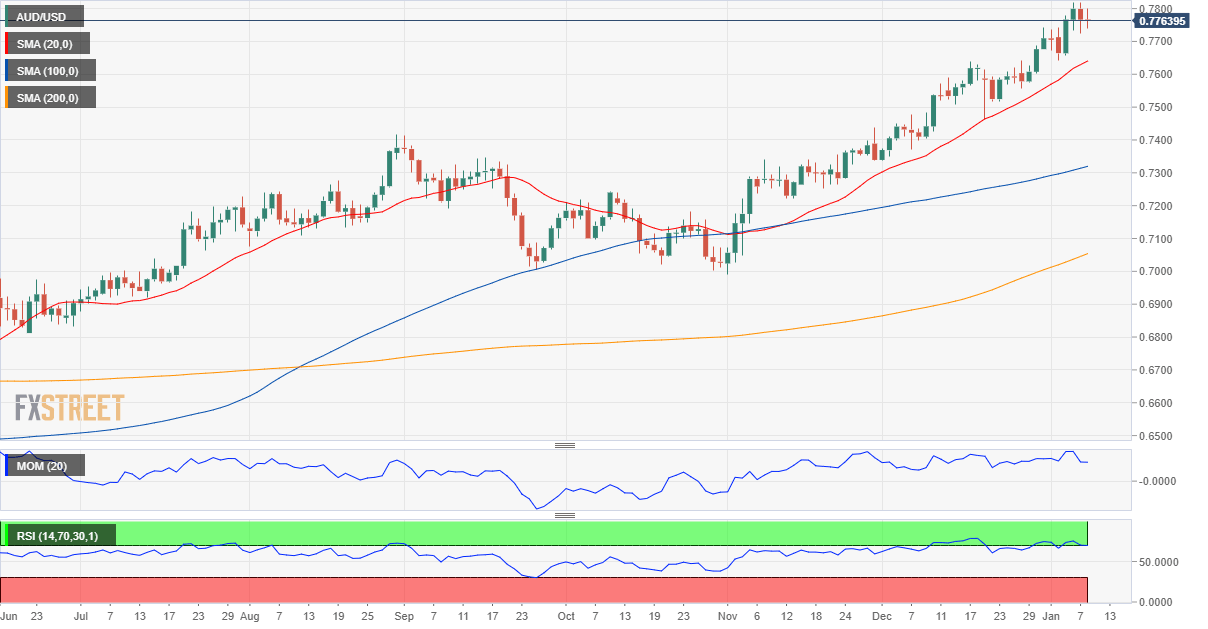 According to the FXStreet Forecast Poll, the pair will maintain its bullish stance in the near-term but suffer a U-turn afterwards. From an average target of 0.7763, the pair is seen a 0.7533 in a month. In the quarterly perspective, bears retain control although on average, the pair is seen holding above 0.7500.

The Overview chart tells a different story. The weekly and moving averages are firmly bullish, while the quarterly one retains its neutral stance. The same chart shows that chances of a break below the 0.7000 threshold are now out of the picture.

GBP/USD Weekly Forecast: Sterling may get shots in the arm, Powell could pummel the dollar