The EUR/USD pair kick-started 2021 reaching a fresh multi-year high of 1.2349, as optimism continued to undermine the greenback. The dollar got to recover some ground ahead of the weekly close, but retains its intrinsic long-term weakness, as it latest advance seems a mere correction.

Financial markets’ motor has been optimism about an economic comeback in the second half of this year, while the massive stimulus coming from governments and central banks continue to fuel demand of high-yielding assets. Coronavirus immunization through different approved vaccines has seen a bumpy start in December, but it’s in progress. According to Bloomberg, which collects data from governmental sources, over 17.5 million doses have been applied globally, 6.25 million just in the US.

Optimism is being partially overshadowed by record cases in the US and some European countries, which resulted in more restrictive measures. In that sense, things didn’t change with the new year, and would likely remain the same over the next couple of months.

The American dollar recovered ground as Wall Street soared to historical highs, and government yields surged to levels last seen in March 2020, when the pandemic hit the world and spurred risk-off.  That happened despite turmoil in Washington.

A mob of allegedly  US President Donald Trump’s supporters stormed the Capitol when Senators were set to approve the Electoral College’s decision to confirm Joe Biden as the new president. Many blame Trump for inflaming the spirits by calling his followers to fight the election’s“fraudulent” result. A couple of days after the event he called for reconciliation and announced that an orderly transition would take place on January 20. Things are slowly falling into place.

The macroeconomic picture shows what everyone knows

Data released this past week failed to impress markets, as most of it was old news. Markit published the final versions of its December PMIs. The reports showed that business activity in the Union eased in the month, although at a slower pace than in November. Manufacturing output in the region held into expansion territory, although services output fell into contraction levels.

The US published the official ISM indexes, with manufacturing activity soaring and services-related one retreating.  The country also released its Nonfarm Payroll report on Friday, which showed that the country lost 140,000 jobs in December, much worse than anticipated. The news kept the dollar in check, somehow confirming the latest gains are merely corrective.

The upcoming week will be quite a light one, as there’s little to take care of, at least from the macroeconomic side. The US will release December CPI figures next Wednesday and Retail Sales on Thursday.  A critical report will be out next Friday, as the country will publish the preliminary estimate of the January Michigan Consumer Sentiment Index.

The only relevant release coming from the EU is November Industrial Production, to be out next Wednesday.

The EUR/USD pair bottomed this past week at 1.2212 and surged to 1.2349. It posted a higher high and a higher low compared to the previous week, which means that bulls retain control and fresh tops are still at sight.  The pair is en route to 1.2554, 2018 year’s high.

In the weekly chart, the pair is developing over 400 pips above a bullish 20 SMA, which maintains a strong bullish slope above the longer ones. The Momentum indicator has lost its bullish strength but holds at a multi-month high within positive levels. The RSI consolidates around 66, without signs of bullish exhaustion.

In the daily chart, the pair has met buyers around a bullish 20 SMA, currently around 1.2210. Technical indicators eased, with the Momentum challenging its midline, but the RSI still within positive levels. Somehow, it seems the pair is in a corrective decline that may continue in the nearest-term, although nothing is indicating an upcoming bearish case. 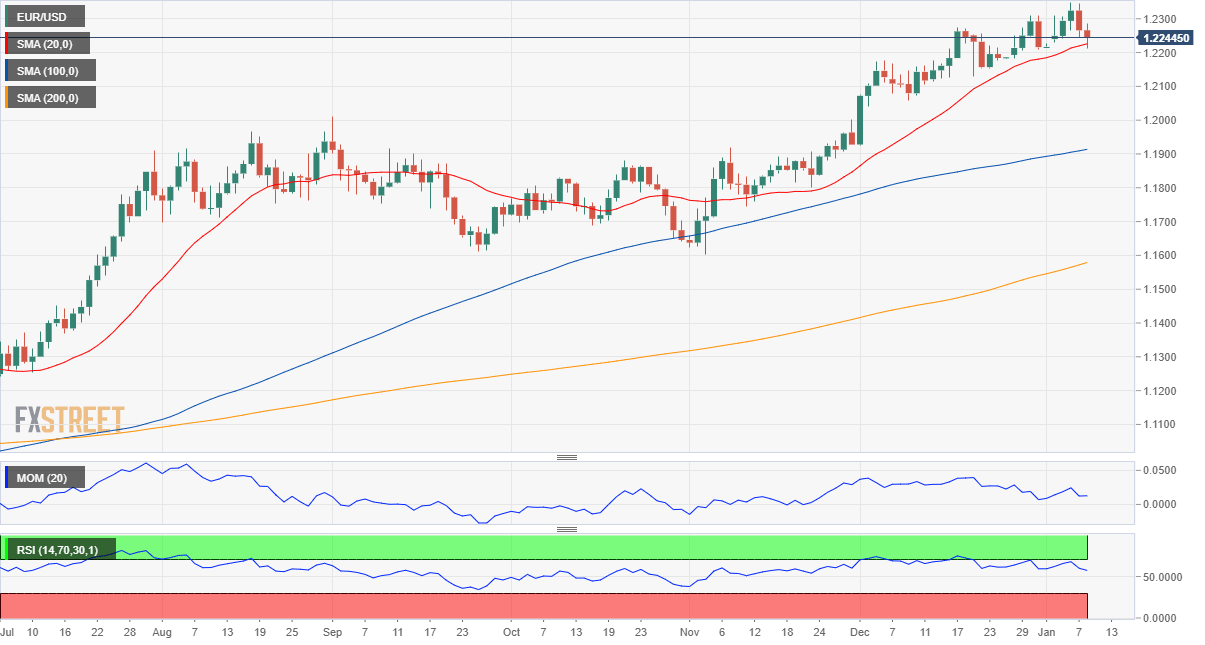 The FXStreet Forecast Poll indicates that the pair will likely retain its gains next week, with buying and selling interest equally balanced and the pair is seen on average at 1.2242. Bears are a modest majority in the monthly and quarterly perspectives, with the pair anyway seen holding above the 1.2100 figure.

The Overview chart shows that the spread of possible targets is shrinking when compared to a month ago, and higher highs come at sight with the 1.24/1.26 now becoming possible. To the downside, the bar was lifted to 1.18, as possible declines below this level are quite a few.

GBP/USD Weekly Forecast: Sterling may get shots in the arm, Powell could pummel the dollar