The AUD/USD pair has continued to consolidate gains, spending a second consecutive week above the 0.7700 level but unable to break through the 0.7800 mark. The commodity-linked currency had good reasons to run, but speculative interest chose to keep on waiting for a clearer greenback’s picture.

Base metals, stocks and the aussie

Base metals such as Copper and Palladium reached record highs in the last few days amid prevalent optimism related to a global post-pandemic economic comeback. For sure, developed economies are seeing the light at the end of the tunnel, and that applies both for the US and Australia. Stocks and gold prices, however, were unable to reflect the positive mood, edging marginally lower on a weekly basis, putting a cap to aussie’s potential gains.

Meanwhile, the US Federal Reserve had a monetary policy meeting this week, and while some analyst labeled as a “dovish” meeting, it was more of the usual wait-and-see.  Fed Chair Powell balanced a cautious tone over the risk of the pandemic with optimism about economic progress. He mentioned a couple times of a near-future when the country will be beyond the curve and has eft coronavirus behind, but reminded market players that the economy still needs to recover 8.4 million jobs and that the Fed will not act until progress toward its goals on employment and inflation are materialized.

The American dollar has reasons to strengthen, but it is also on hold, ahead of a clearer picture and additional confirmations from macroeconomic figures.

The US published mostly encouraging data. The CB Consumer Confidence Index jumped to 121.7 in April from 109 in March, largely surpassing the market’s expectations. Weekly unemployment claims came in at 553K, missing expectations but still near the lowest since the pandemic began, a clear sign that the employment sector is in recovery mode. Durable Goods Orders were the exception to the rule, as they increased a modest 0.5% in March.  Finally, Personal Spending rose 4.2% in March, the fastest pace in nine months, while Personal Income soared 21.1%. Core PCE inflation, the Fed’s favorite measure, met the market’s expectations by printing at 1.8%.

Australia, on the other hand, had little to offer, with unimpressive outcomes. Q1 inflation figures missed the market’s expectations, as the quarterly Consumer Price Index contracted to 0.6% from 0.9%, while the RBA Trimmed Mean CPI for the same period came in at 0.3%. The Producer Price Index in the same period posted a modest 0.4% advance, slightly better than the 0.3% expected.

Where is the Australian economy?

During the next few days, the market may have a clearer picture of where the Australian economy is standing. The country will kick-start the week by publishing April manufacturing indexes and April TD Securities Inflation. On Tuesday, the RBA will announce its decision on Monetary Policy, although central bankers are expected to maintain the current policy on hold. As the week develops, Australia will also offer updates on Services PMI and housing-related data.

The US macroeconomic calendar will include the  April official ISM PMIs, expected to show persistent economic growth. The focus will be on employment-related data, starting on Wednesday with the ADP survey on private jobs creation and ending on Friday with the Nonfarm Payrolls report. The country is expected to have added 926K new jobs in April, while the unemployment rate is expected to have shrunk to 5.8% from 6% in the previous month.

The AUD/USD pair is technically neutral in the longer perspective, with a mildly bullish potential. The weekly chart shows that it held above a bullish 20 SMA, but also that the longer moving averages lack directional strength, far below the current level. Technical indicators head nowhere, as the Momentum indicator is around its midline and the RSI at 60, indicating absent selling interest.

On the daily time-frame, the pair continues to seesaw between gains and losses. It holds above bullish moving averages, with the 20 and 100 SMA converging around the 0.7700 figure, but technical indicators keep losing strength within positive levels. 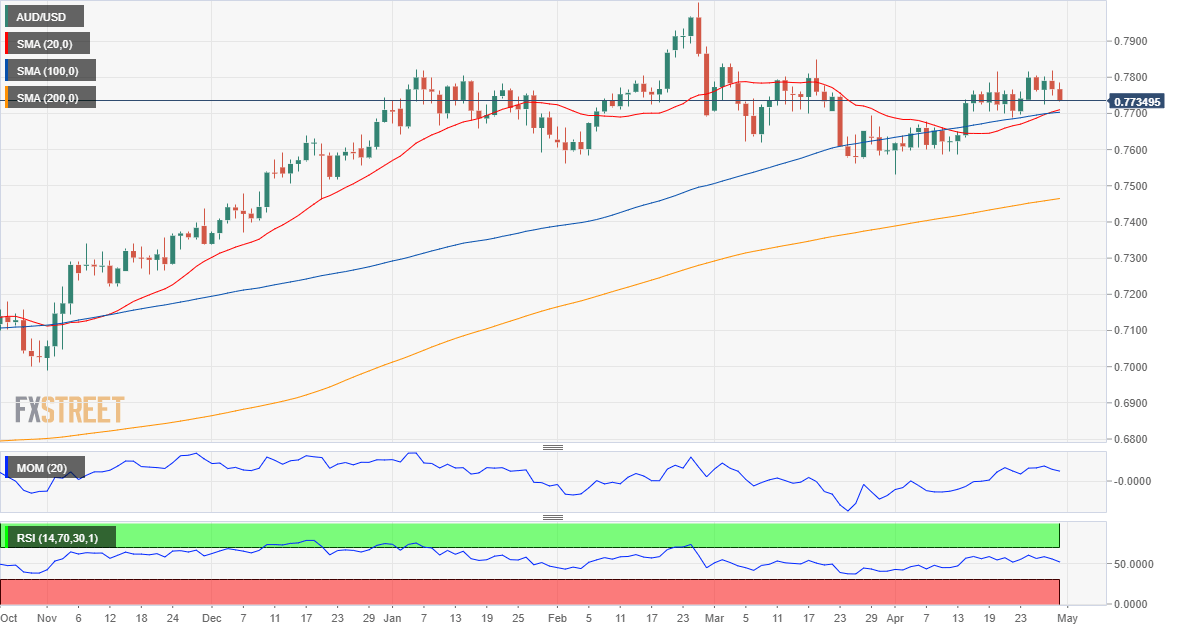 According to the FXStreet Forecast Poll, the AUD/USD pair will extend its consolidative phase in the upcoming weeks.  The pair is seen on average at 0.7737 weekly basis, as the number of bulls matches the number of those betting for a decline. The monthly and quarterly perspective have a majority of bears, but the pair is expected to hold within the current levels.

The Overview chart shows that moving averages remain flat, although the 3-month one is slowly picking up, skewing the risk to the upside without confirming an advance. The range of possible targets is well limited, although in the longer term, higher highs appear, signaling bullish intentions from experts.

EUR/USD Weekly Forecast: When will the dollar advance on self-strength?