The AUD/USD pair holds on to modest gains just above 0.7300 as an uneventful week comes to an end. The American currency got no love from market players, as the US is immersed in a chaotic uncertainty.  The battle about who won the presidential election continues, as US President Donald Trump refuses to concede and spreads its anger on Twitter and courts. Simultaneously, the number of new coronavirus daily contagions has reached records above 170K, while the death toll surpassed 250K.

Aussie in a bullish limbo

A tough lockdown was imposed in South Australia, although it was lifted sooner than expected after contact tracers found out that one infected person deliberately lied about his exposure and contact with others. South Australia state Premier Steven Marshall explained the situation in a press conference, indicating that such lies made authorities believe they were facing a highly contagious strain.

Despite a better pandemic situation, the AUD was unable to appreciate against its US rival. Instead, the commodity-linked currency followed the uneventful behavior of equities, which, in turn, reflected the apathetic market´s sentiment.

The aussie was underpinned at the beginning of the week by comments from RBA’s Governor Philip Lowe, who said that negative rates in Australia are still extraordinarily unlikely, repeating that economic growth is linked to keeping the pandemic under control. Upbeat Australian data, however, failed to impress. The October employment report showed that the country added 178.8K jobs, while the unemployment rate ticked modestly higher to 7.0%. Full-time jobs grew by 97K, while the economy added 81.8K part-time positions. Also, the preliminary estimate of October Retail Sales beat expectations, up by 1.6%.

Investors also ignored discouraging figures. According to the official release, the Wage Price Index rose 0.1% in the three months to September, worse than the 0.2% expected, and the lowest quarterly increase on records. The annual growth rate came in at 1.4%, missing the expected 1.5%.

The pair has spent a second consecutive week in a tight 100 pips’ range, although near its year high at 0.7411. The weekly chart shows that a flat 200 SMA continues to provide dynamic support while the 20 SMA advances below it. Technical indicators remain within positive levels but lack directional strength. Bulls are in control but still unwilling to push it towards fresh highs.

The daily chart provides quite a similar scenario, as the pair spent the week developing above all of its moving averages and with technical indicators lacking directional strength, but well into positive territory. 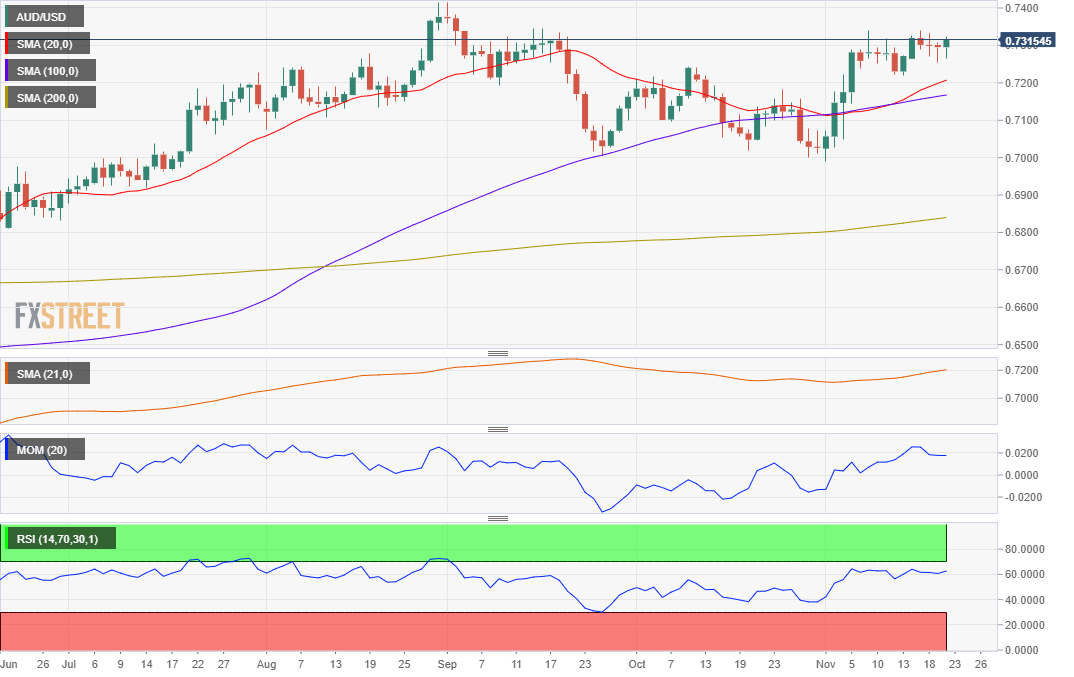 The FXStreet Forecast Poll suggests that bulls will keep on pressuring. In the weekly perspective, 70% of the polled experts are betting on an advance, with an average target of 0.7370. Bears dominate the monthly view, but on average, the pair is seen at 0.7255. Bulls retake control in the quarterly view

The Overview chart keeps indicating that there’s no room for bears. The pair is hardly seen below 0.70, while the moving averages maintain their bullish slopes. At this point, the pair has more chances of reaching 0.7600 than of breaking below the 0.7000 threshold.