The Aussie was an unexpected winner this past week, surging against the greenback to over one-month highs in the 0.6850 region. The AUD/USD pair firmly advance for four consecutive days, after falling to 0.6687, the third time it bounces from the 0.6670/80 region in these last few weeks. The initial boost came from better-than-expected Chinese data and the RBA monetary policy announcement.

The central bank held its official cash rate on hold at a record low of 1.0% as expected. The accompanying statement indicated that “the outlook for the global economy remains reasonable, although the risks are tilted to the downside,” in-line with its previous view. China released alongside the Caixin Manufacturing PMI which bounced back in expansion territory, up to 5.4 in August from 49.9 in July. The Caixin Services PMI for the same month recovered from 51.6 previously to 52.1.

Australia released its Q2 Gross Domestic Product, which came as expected, indicating anyway the slowest pace of growth in several years. Nevertheless, the market had priced it in ahead of the release. A huge surprise was the Current Account Balance, which posted its first surplus in 44 years.

Meanwhile, the US released some poor data at the beginning of the week that kept the pair in the bullish path, exacerbated Thursday by the news that the US and China would soon resume trade talks, having agreed to meet in early October.

Better-than-expected US data released later in the week gave Wall Street a boost that kept the pair rallying.

The pair could see quite a start of the week, as, ahead of the opening, China will release it August Trade Balance. In dollar terms, the surplus is foreseen at $43.00B, with exports up by 2.0% and imports down by 6.0% a result of the trade war with the US. Chinese inflation will be out on Tuesday, although no big chances are foreseen there.

The AUD/USD pair is closing the week with substantial gains, and above a major static support, the 38.2% retracement of its July/August decline at 0.6830. The pair met sellers just ahead of this last level throughout August, making of it quite a relevant support now. Nevertheless, the weekly chart shows that the potential of a firmer recovery is limited. The 20 SMA keeps heading south far below the larger moving averages, now around the 61.8% retracement of the mentioned decline at 0.6920 a possible bullish target and a breakout point. Technical indicators have recovered within familiar levels, still below their mid-lines.

In the daily chart, the pair has surpassed its 20 SMA, now gaining upward traction at around the 23.6% retracement of the same monthly decline, while the 100 SMA heads south, not far below a strong Fibonacci resistance. Technical indicators head firmly high within positive levels, maintaining the risk skewed to the upside. 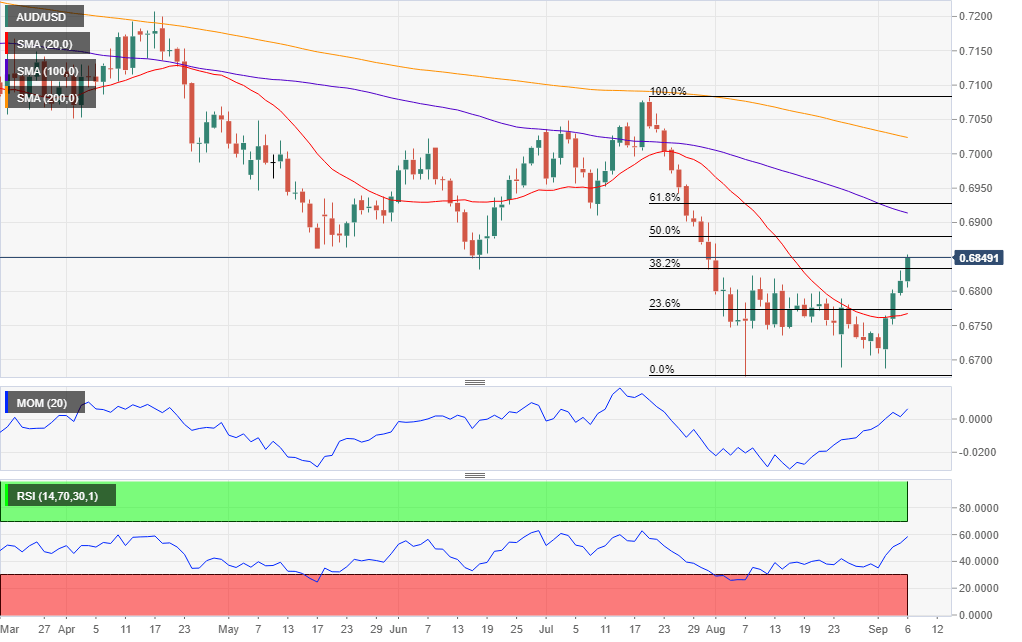 The FXStreet Forecast Poll is suggesting that the current recovery will continue in the short-term, but that the pair will soon resume its decline, as bulls are a majority just in the weekly perspective, with the pair seen averaging 0.6858. In the one-month and three-month bears are the majority.

The Overview chart paints a mixed picture, with the moving averages heading higher in the one-week and one-month perspectives, but turning south in the quarterly one. The average target is being lifted by bets from banks, which see much higher targets than the market’s analysts.