The EUR/USD pair has fallen to a fresh two-year low of 1.0925 this past week, from where it bounced to flirt with the 1.1100 figure. Now trading at around 1.1050, the common currency remains among the weakest of the G-6 complex, holding afloat amid a mixed US Nonfarm Payroll report. Attention now shifts to central banks, with the ECB meeting next week, September 12, and the US Federal Reserve on September 18-

Why happened what happened?

The American currency came under selling pressure Tuesday, following the release of a dismal ISM Manufacturing PMI, which fell into contraction territory in August by printing 49.1, its lowest in three years. Further pressure came from a bounce in risk-sentiment, as China announced trade talks with the US will resume next October after top officials from both countries had a phone call. The greenback recovered Thursday on the back of an encouraging ISM Services PMI, although it seemed more as an excuse to get rid of the EUR than anything else, as the market continues believing the ECB will outpace the Fed when it comes to applying additional monetary stimulus.

The US Nonfarm Payroll report failed to trigger relevant moves, as US companies added a modest 130K new jobs in August, with 25K being government hiring, which means the headline figure is even more discouraging. The unemployment rate held steady at 3.7%, near a five-decade low. Quite encouraging, however, was wages’ growth, up by 0.4% in the month and by 3.2% when compared to a year earlier.

Ahead of the event, US President Trump tweeted: “ the Fed should lower rates. They were WAY too early to raise, and Way too late to cut - and big dose quantitative tightening didn’t exactly help either. Where did I find this guy Jerome? Oh well, you can’t win them all!” Considering that Federal Reserve Chief Powell is set to speak post-London fix, the market could see some wild moves ahead of the close.

What will happen next?

The ECB is the shining star of the week. Ahead of the event, most policymakers have hinted an upcoming “significant” stimulus, lifting the bar. The ECB is expected to give details on its TLTRO III, but if it just focuses on it, will be sort of disappointing, as much more is being priced in. Germany will release its final inflation data ahead of the event, while the US will do the same afterward.

Next Friday, the US will release August Retail Sales and the preliminary estimate for the Michigan Consumer Sentiment Index for September, foreseen at 94.0 after collapsing to 89.8 in August.

The usual caveats about Brexit and the US-China trade war persist.

The EUR/USD has recovered half of its previous week losses, and the long-term picture remains skewed to the downside, as, in the weekly chart, it remains far below all of its moving averages as technical indicators hover within negative levels. The 20 SMA maintains a bearish slope below the larger ones and currently at 1.1190, the level to surpass to have chances of recovering further.

In the daily chart, the pair is hovering around the 50% retracement of its latest daily decline, having met sellers around a bearish 20 DMA, currently at around the 61.8% retracement of the same decline around 1.1075. Technical indicators have recovered from oversold readings, heading higher with uneven strength and within negative levels, not enough to confirm further gains ahead. 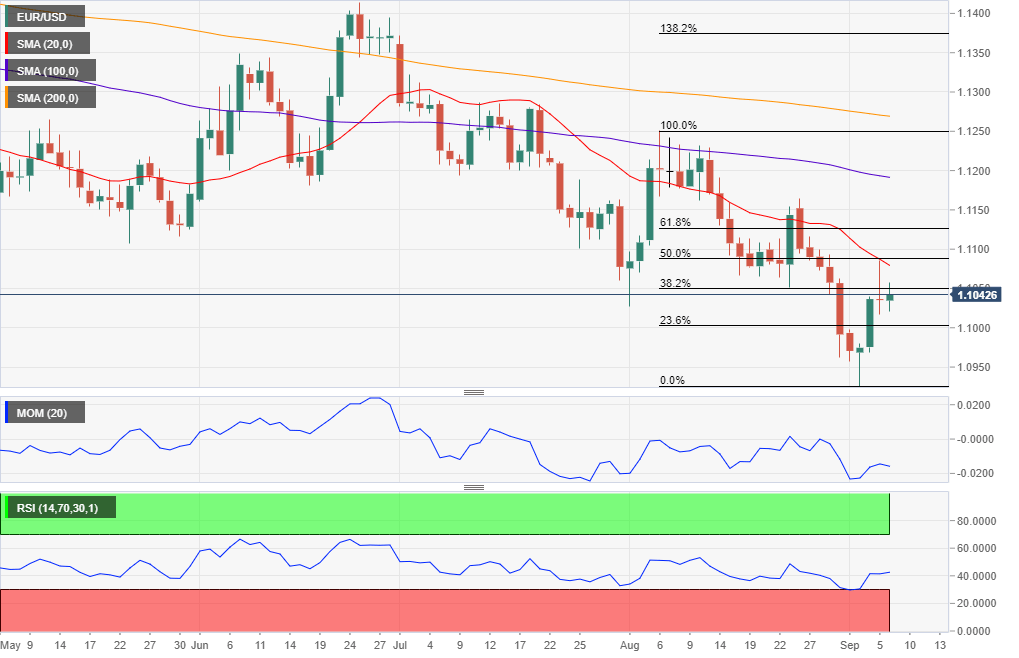 The FXStreet Forecast Poll indicates that the latest bounce is not convincing speculative interest, as the pair is seen consolidating next week, to resume its decline afterward. The average target is 1.1040 for the next days, with bulls and bears balanced at 42.%. In the one-month view, bears surge to 59%, and are down to 40% in the quarterly perspective, although in this last bulls keep decreasing. A couple of banks are betting for sharp recoveries, lifting the average target in the one month and three months views.

Nevertheless, the Overview chart shows that, while a modest bounce is expected this next week, bears retain control of the pair, with the moving averages still heading south and at lower lows. In the quarterly view, most targets come below the current level, skewing the risk to the downside in the longer term.