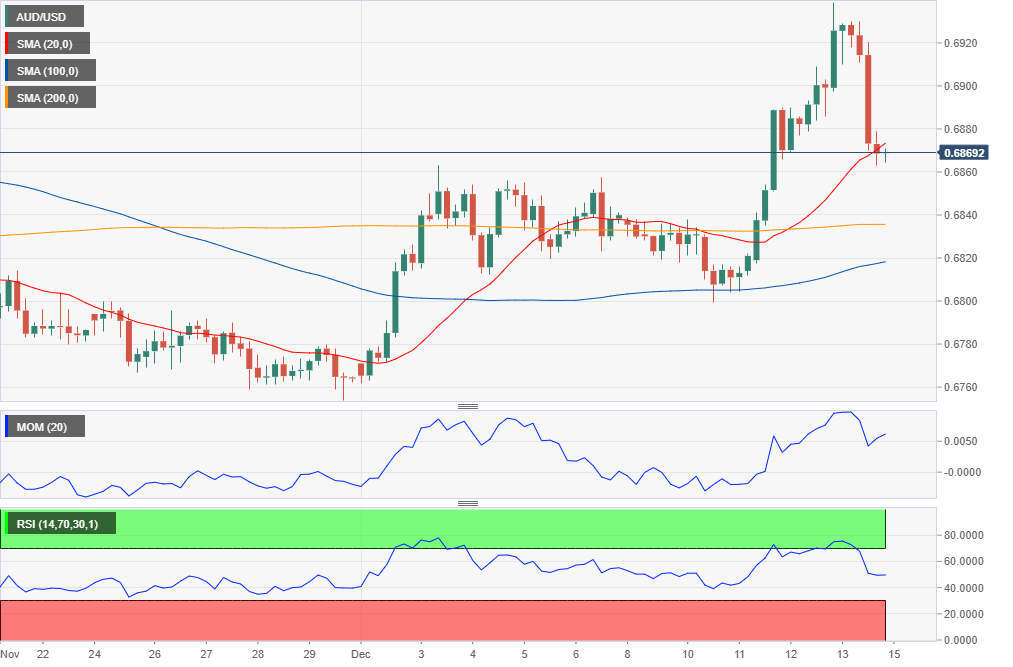 The AUD/USD pair surged on Friday to its highest in over 4-month, printing 0.6938 before retreating. The early momentum was the result of UK PM Johnson´s victory and hopes for a US-China trade deal. The agreement was announced by the end of the US session, boosting the greenback and dragging the pair sub-0.6900. Nevertheless, it closed with gains for a second consecutive week, and risk-appetite should keep the downside limited even in the case of dollar’s persistent strength.

This Monday,  Australia will release the preliminary December Commonwealth Bank Manufacturing PMI, foreseen at 50.4 from the previous 49.9, and the Services PMI, expected at 49.1 from 49.7 previously.  China will publish November Industrial Production expected to have risen by 5.0% and Retail Sales for the same month, seen up by 7.6%.

The daily chart for the AUD/USD pair shows that it failed to hold ground above a bearish 200 SMA, this last around 0.6905. The 20 DMA is barely above the 100 DMA, both around 0.6800, lacking clear directional strength. Technical indicators have retreated from overbought readings,  suggesting the pair may have hit an interim top, to be confirmed if the current decline continues sub-0.6865 a former relevant resistance level. In the 4-hour chart, the pair stalled its decline around a bullish 20 SMA, which remains above the larger ones, while technical indicators retreated sharply from overbought readings to stabilize in neutral levels, falling short of confirming a downward movement ahead.