The AUD/USD pair has continued recovering this week, although the pace of the advance has decelerated. The pair reached a fresh six-week high of 0.6894, underpinned by news related to the trade war between the US and China.  The pair is now up for an eighth consecutive day, although having struggled unsuccessfully to overcome a Fibonacci resistance ever since the week started.

China will keep on leading the way

Australian mostly discouraging data was one of the reasons behind the lack of relevant progress, as the  NAB’s Business Conditions Index in August decreased to 1 from 2, while the NAB’s Business Confidence Index also printed 1 from a previous 4. Furthermore, consumer inflation expectations eased to 3.1% in September, compared to 3.5% in August. The negative effect of the headline was offset by optimism coming from the trade war front, as there was a ceasefire between the two economies. China released a list of American products that would be exempt from new tariffs, while US President Trump delayed a tariffs’ increase originally meant to be applied on October 1st by two weeks. The “gestures” however, are way short of indicating a deal could be achieved soon. The positive momentum of equities post-ECB kept the pair afloat.

The macroeconomic calendar will be a bit more appealing these upcoming days, as, early Monday, China will release August Retail Sales and Industrial Production, both expected to pick up when compared to July annual figures. On Tuesday, the RBA will release the Minutes of its latest meeting, while on Thursday, the country will publish its August employment data.

The US Federal Reserve will have its monetary policy meeting this week, and would likely overshadow it all.

The weekly chart shows that the AUD/USD pair is stuck around the 50% retracement of its July/August decline, anyway holding on to weekly gains. Technical indicators lack directional strength within negative levels, while the pair is a handful of pips below a bearish 20 SMA, currently at 0.6905. The 61.8% retracement of the mentioned decline comes at 0.6925, which means that only beyond this last bulls will be more confident.

In the daily chart, the risk remains skewed to the upside, as technical indicators hold ground near overbought readings, while the pair keeps advancing above a now bullish 20 DMA. The 100 SMA is losing its bearish strength at around 0.6905, reinforcing the resistance area. The next possible target comes at 0.7000, with the bullish potential fading around this last. The immediate support is 0.6830, followed by 0.6770. Bears could take over if this last gives up. 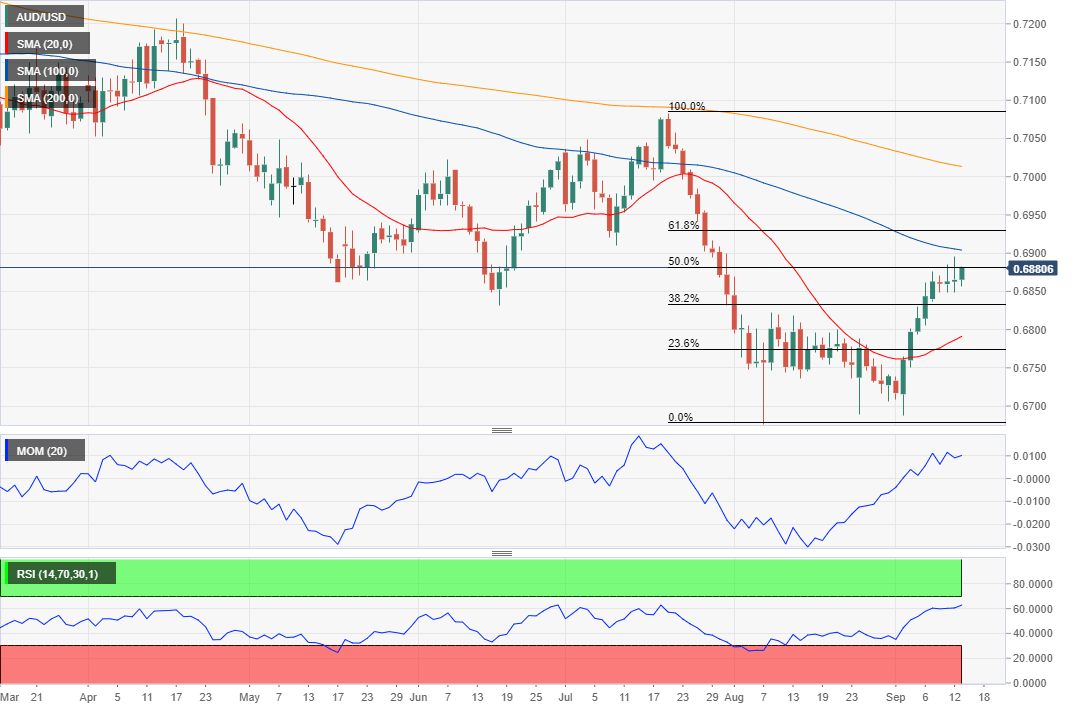 The FXStreet Forecast Poll is supporting the technical view, as bulls retain control in the weekly view, up to 70% when compared to 55% previously. The average target is 0.6899. The sentiment is bearish in the one month and quarterly perspectives, with a drastic decrease of bulls.

In the Overview chart, most targets accumulate above the current level in the weekly view, but then move to around 0.6700 in the monthly one, with the moving average then flat. The uncertainty related to the US-China trade war keeps the longer-term view shady, with no evident accumulation of targets then.

EUR/USD trades within familiar levels, holding above 1.17 as US bond yields rise amid the US fiscal impasse and ahead of US inflation figures. Coronavirus and growth-related headlines lead the way for financial markets.

GBP/USD met sellers around 1.3050 and is back under pressure, after UK Q2 GDP fell by 20.4%, marginally above expectations. The devastating drop was priced in by markets and US inflation is now eyed.