It's a giant data day, with Aug retail sales at the top of the list. Bloomberg expects a 1% rise after 1.2% in July, but it could be much lower since Aug was the first month after the special unemployment benefits expired. Unless consumers were counting on the second bill, and got pie in their faces instead. That means the Sept sales number will be more important.

About the Fed: the pandemic rules. It doesn't always seem that way but data is saturated with it and won't return to normal until some kind of end is perceived, if not achieved. This applies to central banks, too, especially the Fed. Even if it comes up with a dual forecast (one based on rapid recovery due to vaccine/pandemic abatement and another based on a prolonged ordeal), the Fed is strapped for Real Action. We already know rates will remain the same for a very long time, perhaps most or all of next year. The June projections saw rates the same through 2022. The WSJ speculates that might get extended today to 2023.

Unless the Fed repeats formally as an institution what has already been said by individuals—that the outlook depends entirely on now-delayed fiscal action—there is almost nothing the Fed can offer to implement the "new" policy. Negative rates seem off the table and Japanese-style "curve control" is not even mentioned in the financial press as an option.

What can the Fed do to get average inflation up, a precondition for rate hikes? It's conceivable the Fed will name specific numbers for unemployment, even though that would fly in the face of the seeming rejection of a Phillips Curve orientation. As noted before, refutation of the Phillips Curve began already in the late 1970's and has been validated over the past decade. We might get some specific information about the mix of short, medium and long-term asset-buying, something the bond boys seem to want.

The Fed is in a pickle. It can't refine timeframes for what will happen when—its crystal ball is no clearer than anyone else's. Powell will be pressed to define "some time" and other vague language, but must decline. At a guess, unless the Fed gets creative and devises some kind of special lending program for the pandemic-afflicted or another alternative to a fiscal recovery initiative by Congress, there is nothing in sight that should push the dollar in either direction, implying the downward move will remain in place. It might strengthen to the downside if the Fed is especially gloomy and pushes out the first rate hike to end-2023.

Adding to our charts yesterday on inflation, the Cleveland Fed offers the perspective shown in the chart below. It's a pretty fancy model but never mind—the eye does not deceive. The point: surveys by various outfits, including the University of Michigan, can't hold a candle to professional economists' models like the Cleveland (and Atlanta) Feds. We are not getting inflation.

In fact, the US recovery is probably decelerating and won't pick up speed again unless and until Congress starts throwing money out of the helicopter. You simply don't get inflation in a recessionary economy. Talk of the K-shaped recovery is picking up—those in the high income brackets see a robust recovery but those suffering from income inequality are falling farther down the rabbit hole.

For the dollar, this means more of the same—it's a reflection of a badly managed domestic economy and will recover to the upside only on the need for a safe haven. If the US stock market corrects big-time—and it will, probably, sometime—then the narrative switches back to risk-off. And gold will track the dollar up, which is really weird, historically. 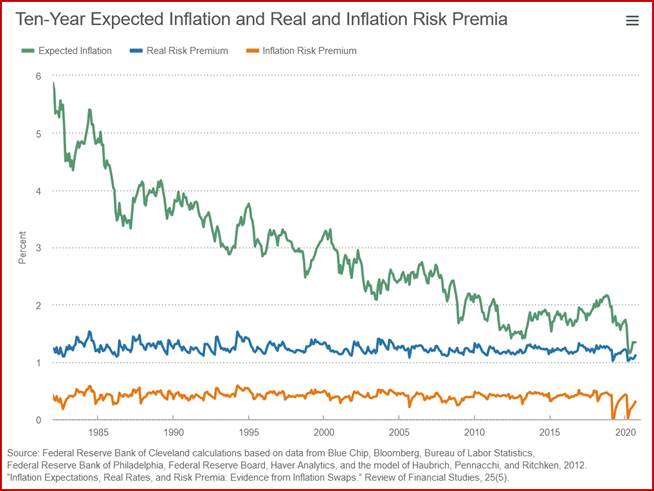 Tidbit: Returning to our musings yesterday about the abnormally firm Chinese yuan, Gittler at BDSwiss is wondering about similar things. He notes that the "CNY is up 4.3% since the end of June, the biggest quarterly gain ever (data back to 1981)." At the same time, the yen is performing well and perhaps it's a "surrogate for CNY, instead of the usual CNY substitute, AUD. So far, the historical correlation is much better between AUD/USD and USD/CNH (a strong -0.52) than USD/JPY and USD/CNH (a barely significant -0.016). But this could change, at least temporarily, if the recovery in China starts to have more impact on the recovery in Japan."

We admit we had to go look up "CNY" and "CNH." Here's what Google delivers: "CNY is the currency code for RMB assigned by the ISO (International Organization for Standardization). Mizuho Bank uses "CNY" to denote RMB funded in the onshore market and "CNH" to denote RMB funded in the offshore market" and "only 'CNY' is an official ISO currency code."