The markets put far too much emphasis on the payrolls report, but it has become a habit and we're stuck with it. Yesterday ADP threw cold water on the outlook with a private sector estimate of 158,000, Both Reuters (172,000) and Bloomberg (188,000) had higher private sector forecasts, so perhaps the ADP is a warning to lower expectations.

The Reuters forecast for overall payrolls is 179,000. That's probably the number to beat, although some want to see the participation rate and others are focused on U6, the underemployment rate (creeping downward from 9.4% in Jan to 8.4% in May). What really counts for solidifying Fed expectations is average hourly earnings, currently expected to tick up to 2.6% y/y from 2.5% in May.

The sentiment has been spreading that the US recovery, while certainly more advanced than elsewhere, is stumbling. It's not falling backwards into recession and deflation is not really a sensible outlook, but it's not exactly a barnstormer, either. And yet there are rays of light that illuminate the enduring resilience of the US economy, including yesterday's nonmanufacturing ISM report, which showed the employment component climbed to 57.8 from 51.4 for the best reading since June 2015. Okay, new orders fell back, but if we are focusing on job growth, it's still there. At the best, we have to judge the data as mixed. At the worst, we have to judge the data as mixed.

The Atlanta Fed sees the glass half full. Yesterday it raised the Q2 GDP forecast to 2.7% from 3.0% on July 3, but a key holding factor was "real nonresidential equipment investment growth," up from 3.4% to 4.9% from the trade report. We get another forecast next Tuesday. See thechart on the next page.

This is not to say the Atlanta Fed is right, but it is to say that whatever the payrolls report today, the US economy is not failing. The expected massive dollar sell-off on a disappointing number will not be justified, and enough people will perceive it that way as to make it a short-lived rout. Be careful.

The other big news item today is G20 and how, exactly, Trump is going to embarrass the US. It may take the form of Trump's ignorance about international trade. He has been fulminating against dumped steel and talking about a tariff on all steel, and while China is the named target, Europe wants a specific exemption. If not, it may retaliate against the US on agriculture and food. The FT names Kentucky bourbon. EC Pres Juncker was fierce: "Our mood is increasingly combative." Brussels would react to Washington not in months but "days." 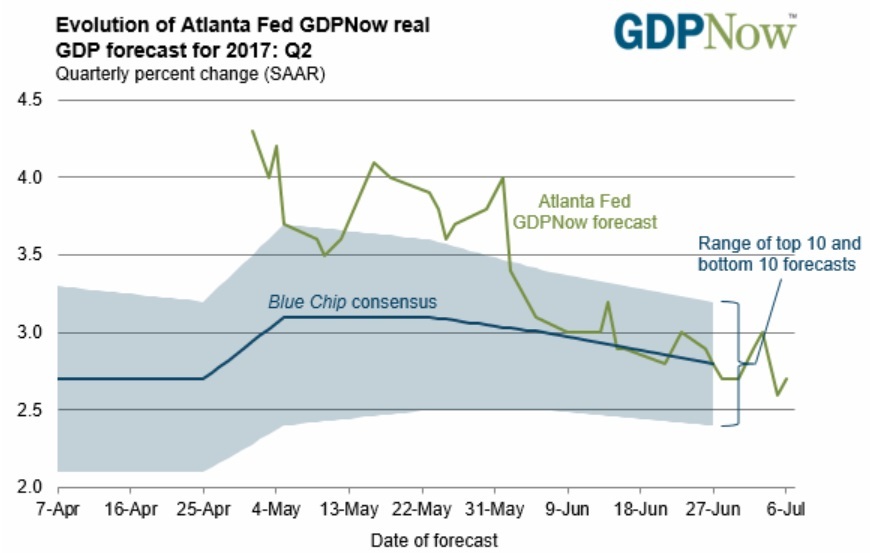 Then there's Russia. Trump threw the US intelligence community under the bus and made fun of the supposedly 17 agencies, saying there are only three or four. Actually, there are 17 and a president should know that. Bad-mouthing your own Establishment on the international stage is worse than bad manners—it's bad showmanship.

He refuses to blame Russia alone for hacking the US election and the talking heads on TV say, to a man, Putin is going to squash Trump like a bug. Putin is smarter, better prepared, has a plan, knows how to play an opponent, and knows everything about Trump, including whatever shenanigans Trump has been up to with Moscow hotels, beauty pageants and Russian banks. Putin probably knows to the penny how much Trump is worth. If Trump is dirty, Putin knows all about it. In contrast, Trump's famous deal-making style is to stamp his foot like a three-year old and demand he get his way until he wears down the other side. The long Russian winter gives Russians more endurance and patience than Trump has ever encountered in his pampered, self-indulgent life. It's no contest, at least in the judgment of experts who know both of them.

Get Forex Headlines by Email

The hottest stories of the currency markets in your inbox

G20 is a dud. It usually is a dud. It's a collection of parties with opposing self-interests, so it can hardly be anything else. Merkel has her hands full but at the same time, the opportunity toshine as the new leader of the free world. The most interesting and lasting conflict was the G20 meeting in Seoul at which the Brazilian finance minister accused the US of a currency war by embracing policies that drove too much yield-seeking capital into emerging markets, stressing their currencies and forming the conditions for a crash. The currency war concept has been around in various forms for a long time and upon the briefest of examination, does not exist in intent or fact, but caused a stir at the time. Let's just hope the erratic Trump doesn't bring it up this time.

We expect the dollar to tank on payrolls but recover later in the day as details get digested. But don't count on it and if you are not already out, get out by noon.