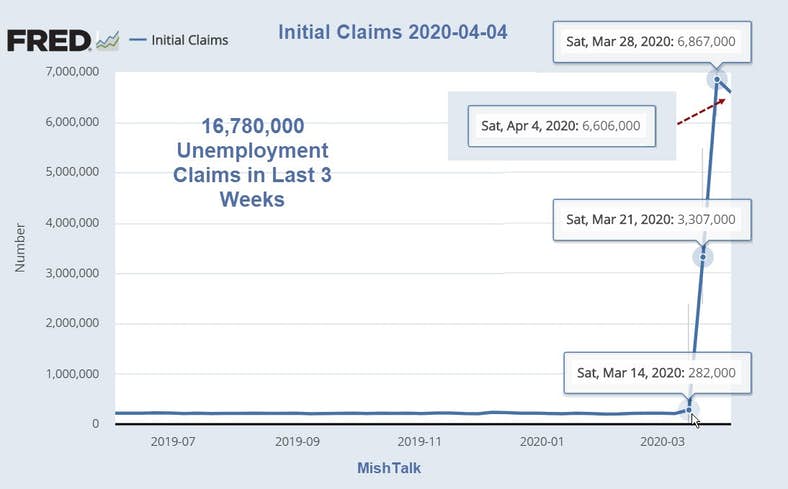 Economists at Econoday expected 5 million claims this week but they were too optimistic once again. 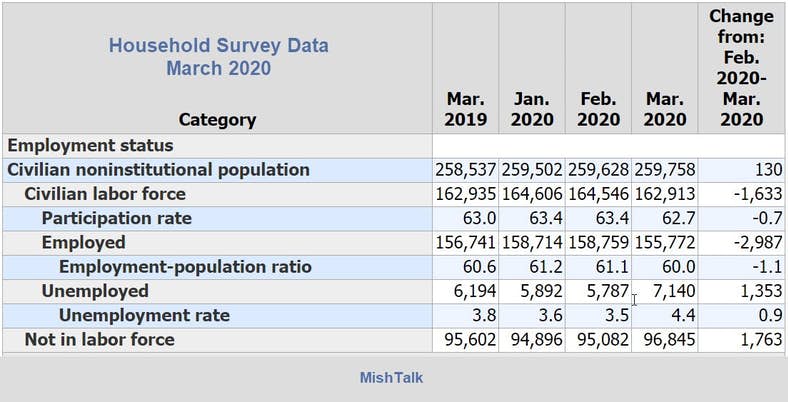 How High Will the Unemployment Rate Rise in April?

Nonetheless, we can take a stab at what things may look like using the initial claims data.

If we assume there are no more claims (not gonna happen) the unemployment rate would be about 14.7%

If we assume another 8 million in the next two weeks total the unemployment rate would be about 19.6%.

How High Will the Unemployment Rate Rise in April?

On April 6 in How High Will the Unemployment Rate Rise in April? I came up with an unemployment rate of 21-22% in a more detailed manner, but also with more assumptions about how many jobs in various categories will be lost.

Leisure and Hospitality jobs will get crushed. I expect close to 12 million jobs lost in that class by itself.

The household survey is not hard data. Rather it is a phone survey. The BLS asks people if they worked any hours in the reference period.

If they say yes, even if it is 1 hour, thay are considered employed.

And with the small business loan program, people might get paid even if they did not work, and that would be counted as working.

Also, I wonder if people will say they did not work even if they did out of fear of losing the $1,000 checks going out to everyone. The two are not related, but it could impact how people respond.

The reference period for the household survey is the week that contains the 12th of the month.

There are two more weeks of initial claims coming before the next jobs report, but that will not matter because the unemployment number is not at all based on claims.

The claims will rise, and even though they are outside the reference period, what matters is how people answer the survey, not whether someone filed before the reference week.

Thus, the survey will be reasonably accurate with the caveats I noted above.

We have some hard numbers, and those numbers are ugly. With two more weeks of claims coming, we are already at the 16.78 million level. If we do get another 8 million claims in the next two weeks, we are roughly looking at an unemployment rate near 20%.

How Fast a Recovery?

Eventually, the coronavirus depression will subside. But what will America look like when it does?

The huge fear now is How Do I Pay the Bills?

This is the second crisis in 12 years. These scars will last.

Note that Vehicle Sales Plunge by 5.5 Million Units, Most Since 1987.

With the stock market down and consumer savings wiped out, will car sales quickly recover?

The same question applies to eating out and airline travel. Simply put, a quick return to business as usual is not in the cards.

For a 20-point discussion of what to expect, please see Nothing is Working Now: What's Next for America?

Add it all up and you should quickly arrive at the correct viewpoint: The Covid-19 Recession Will Be Deeper Than the Great Financial Crisis.