Skillz is back on trader's minds after signalling an interesting move on Tuesday. The stock surged by nearly 12% on Tuesday, closing up at $11.77 and potentially ending a long bearish trend in place since late June. Social media commentary around the stock has picked up and so too have the underlying momentum indicators. There does not appear to be much behind the move, with little in the way of newsflow except for the retail favourite of short squeeze speculation.

Various reports are circulating that the short interest is up at 20% or more, making it a prime example for a squeeze. Whether that is the reason or not, the move was real and has continued to attract buyers, with SKLZ up another 6% at the time of writing in Wednesday's premarket.

Social media sentiment, provided by Refinitiv, shows an increasing volume of comments and increasingly bullish sentiment recently in advance of the spike seen on Tuesday. Is it a useful leading indicator? The correlation with the SKLZ share price has been running quite high since May, but it is far from perfect so, as always, treat this like any other information. Useful but not a clear-cut decision-making tool.

Looking at the chart, we can see peak SKLZ occurred during peak retail or r/wallstreetbets mania back in the early part of 2021. SKLZ peaked at over $46 and has been steadily declining since then. There have been some rebounds but, overall, the big picture trend is still negative so just be aware of that.

Tuesday's spike has taken SKLZ stock up to the 21-day moving average at $11.73. This is the first resistance to break and current indications in Wednesday's premarket are good with SKLZ adding another 6% to trade at $12.57. Breaking above the 21-day turns the short-term trend bullish and the momentum indicators are looking to move higher to confirm this breakout. The Relative Strength Index (RSI) was oversold in mid-August but has now picked up and is about to get above 50. The Moving Average Convergence Divergence (MACD) has also turned higher and crossed into bullish territory on August 23. 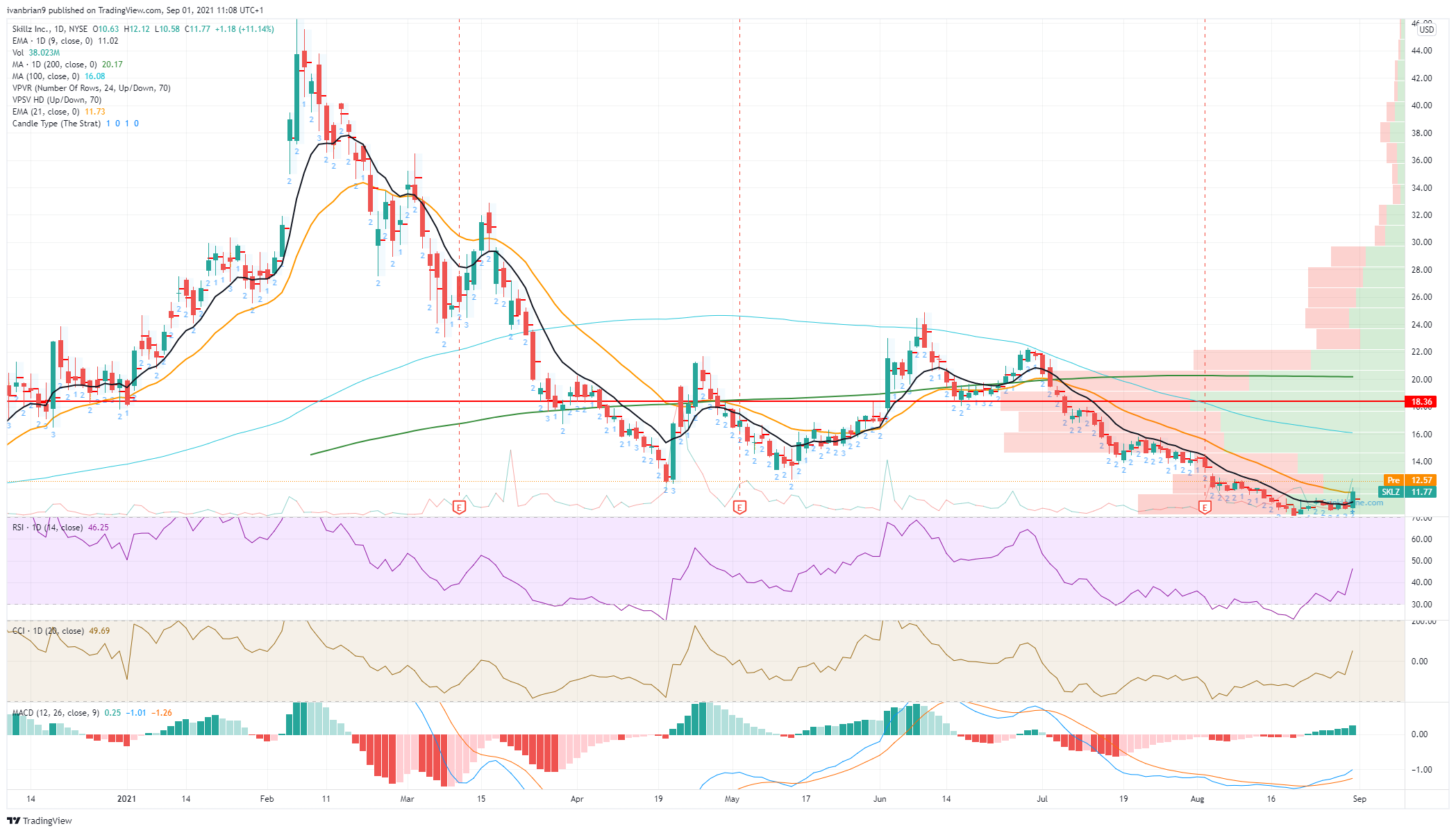 The biggest hurdle is going to be the amount of volume SKLZ has to get through. Look at those volume profile bars on the right. Once SKLZ gets to $15, there is heavy volume. That means more resistance. In a perfect world, a breakout would also have little volume resistance and would provide the perfect setup. Nothing is ever perfect usually, so the move can get to $15 but may slow afterwards. Volume does not thin out again until the stock gets above $22, so we will talk again then!

The closer view on the four-hour chart below shows us the point of control at $16.51 (price with the highest volume) and volume starting to increase from $14. There is a volume gap from $12 to $14, which is a not-too-shabby 20% plus gain, but once we get into heavy volume traffic consider taking some longs off the table to bank some profits and then you can let some ride and have a free shot. Always use stops to manage risk. 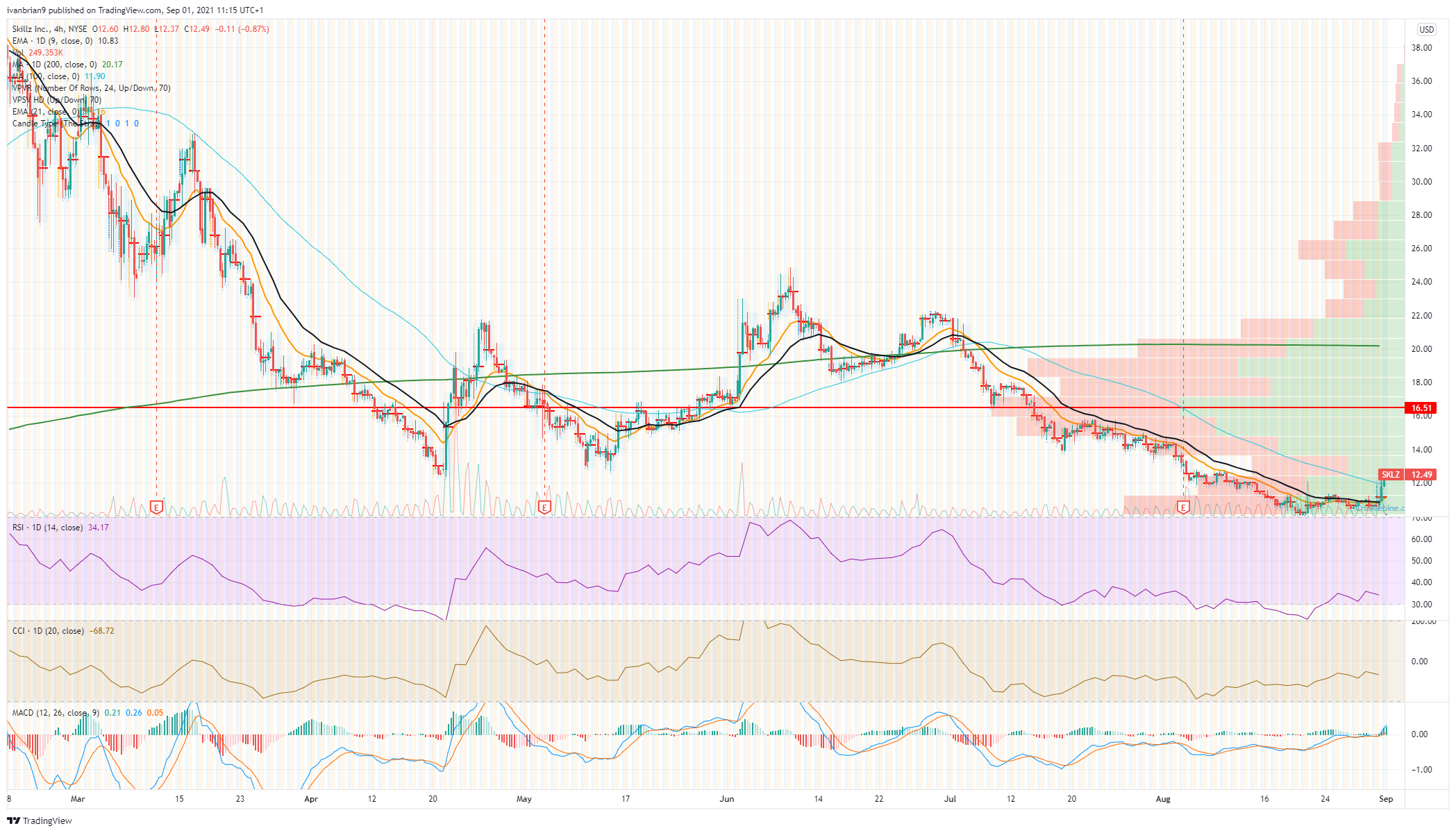