Palantir stock is readying itself nicely for more gains after a solid day on Tuesday. The stock added to recent momentum with a 2% gain to close out at $26.34. This is importantly the first time Palantir has closed above $26 since the breakout move on August 12. The breakout was due to the strong earnings number produced by Palantir on that day. Earnings beat on both EPS and revenue and Palantir spoke bullishly about customer wins and revenue generation going forward.

PLTR stock really jumped on the doubling of free cash flow forecasts from $150 million to $300 million. The breakout was technically a strong move and once $23.49 was broken the volume profile – or the lack of it – allowed the move to surge higher. We then put in a bullish continuation flag with $26 being the top of that flag. That is why it is a key resistance level and, again, the volume profile dictates its importance with little volume above here to provide resistance until the PLTR stock price gets into the low $30s. The overall market remains strong and Palantir has shrugged off some potentially bad news from a report regarding a software glitch.

The New York Post carried an exclusive report last week stating that "a computer glitch in a secretive software program used by the FBI allowed some unauthorized employees to access private data for more than a year, prosecutors revealed in a new court filing." A Palantir spokesperson responded by saying “there was no glitch in the software" and that the company's platform "has robust access and security controls. The customer also has rigorous protocols established to protect search warrant returns, which, in this case, the end-user did not follow”.

That appeared to be that and bulls rushed back to the stock.

Firstly, sentiment is improving toward the stock with social media mentions increasing and showing a nice correlation with the stock price recently. Palantir is a hybrid stock in that it has characteristics of a meme stock with a strong retail following but it also has a strong following on Wall Street with Cathy Wood's ARK funds a regular buyer. As we can see below from Refinitiv, Social media volume peaked on August 25, the day of the New York Post article. The correlation between social media sentiment and the PLTR stock price is currently running quite high so the trend should continue.

Returning to the chart, it is noticeable the gap in volume once PLTR got above $23.49 and again how volume drops off once we get through $26. The flag formation is also highlighted, and it does look like a two-year-old drew on my chart but no, that's me! Ignoring my failure in art in high school, the breakout of the flag is now clear with $26 the last resistance to clear. Key suports are the 9-day moving average at $25.20 and the breakout level at $23.49. 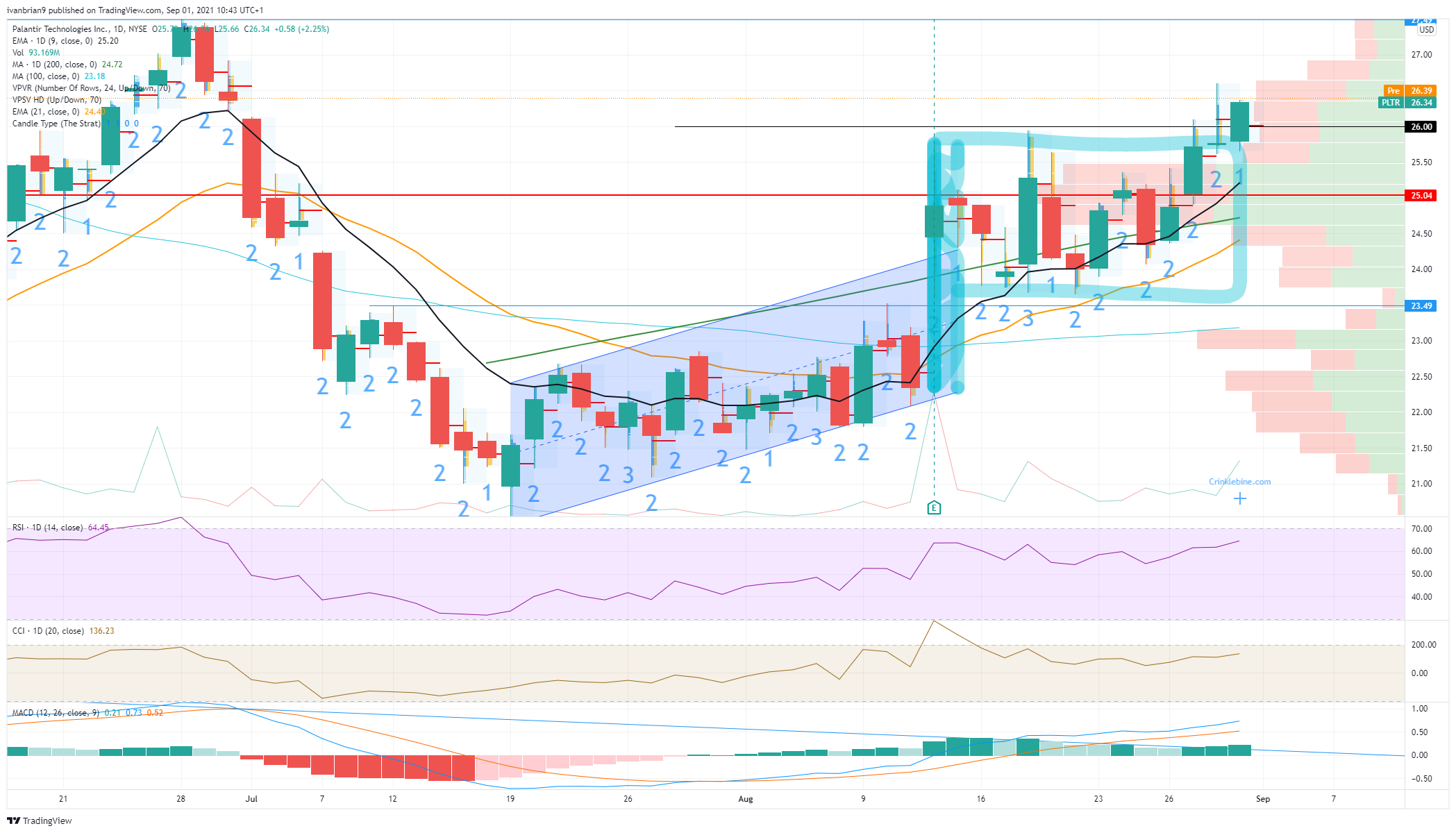