Update: HYMC stock is enjoying a tremendous start to Tuesday's trading session as the news of AMC Entertainment investing in the gold mining company has pumped Hycroft Mining stock. HYMC shares doubled the price right by the session open, jumping to a $2.70 high, before settling just below $2 during the first couple of hours of trading. The retail stock trading crowd is jumping on this penny stock for similar reasons to what happened with AMC.

Hycroft Mining (HYMC) is in the limelight this morning as the company announces investments by AMC and Eric Sprott. Hycroft Mining is, as the name suggests, a miner. It produces gold and silver from its mine in Nevada.

Hycroft announced on Tuesday morning that AMC and Eric Sprott were taking a $56 million joint stake in HYMC.

"AMC and Mr. Sprott will each invest $27.9 million in cash in Hycroft in exchange for 23,408,240 units, with each unit consisting of one common share of Hycroft and one common share purchase warrant," AMC said in a press release.

Shares were purchased at $1.193, and each warrant is exercisable at $1.068 per share. Unexercised warrants expire after five years. AMC will own about 22% of the post-investment stock.

"The strength of Spider-Man: No Way Home and The Batman, as well as 2022's promising industry box office, heighten AMC Entertainment's conviction that we are on a glide path to recovery," said CEO and chairman Adam Aron.

Aron said the reasoning behind AMC's investment in Hycroft is that the miner is in a similar situation to AMC during the pandemic in that it has attractive assets but is facing a dearth of liquidity.

We should point out that Hycroft has made a loss every year going back to 2013. It has a pretty decent revenue stream, but mining is an expensive business, especially in the US compared to some emerging countries. Gold prices are surging due to inflation, and it was this that caught the attention of HYMC traders last week and pushed the price up to $2.65.

AMC does, indeed, state what most observers are thinking – that this is not an obvious investment to make for a movie theatre company. However, AMC has a large retail base of investors now, the AMC apes, and this HYMC stock has likely already shown up on their trading screens before AMC got involved. AMC apes will look at this as a positive, and HYMC is already up 90% in the premarket.

This does seem a bit desperate of AMC and another attempt to keep up with the latest trends. So far AMC has got into the crypto and NFT spaces and is probably a bit late to the party in both cases. This is a staged investment but only serves to heighten AMC's standing with its retail investors.

Lo and behold with perfect timing, notice how Hycroft has just issued a prospectus to let it sell up to $500 million from time to time in new shares of common stock.

This has been a one-way bet for some time as the chart below shows, so is this latest investment a publicity stunt? Even AMC said it requires only the commitment of a nominal amount of cash. This stock loses money every year going back to 2013. The chart is bearish. Getting above $4 might change things, but it likely will not change the fundamentals in our view. 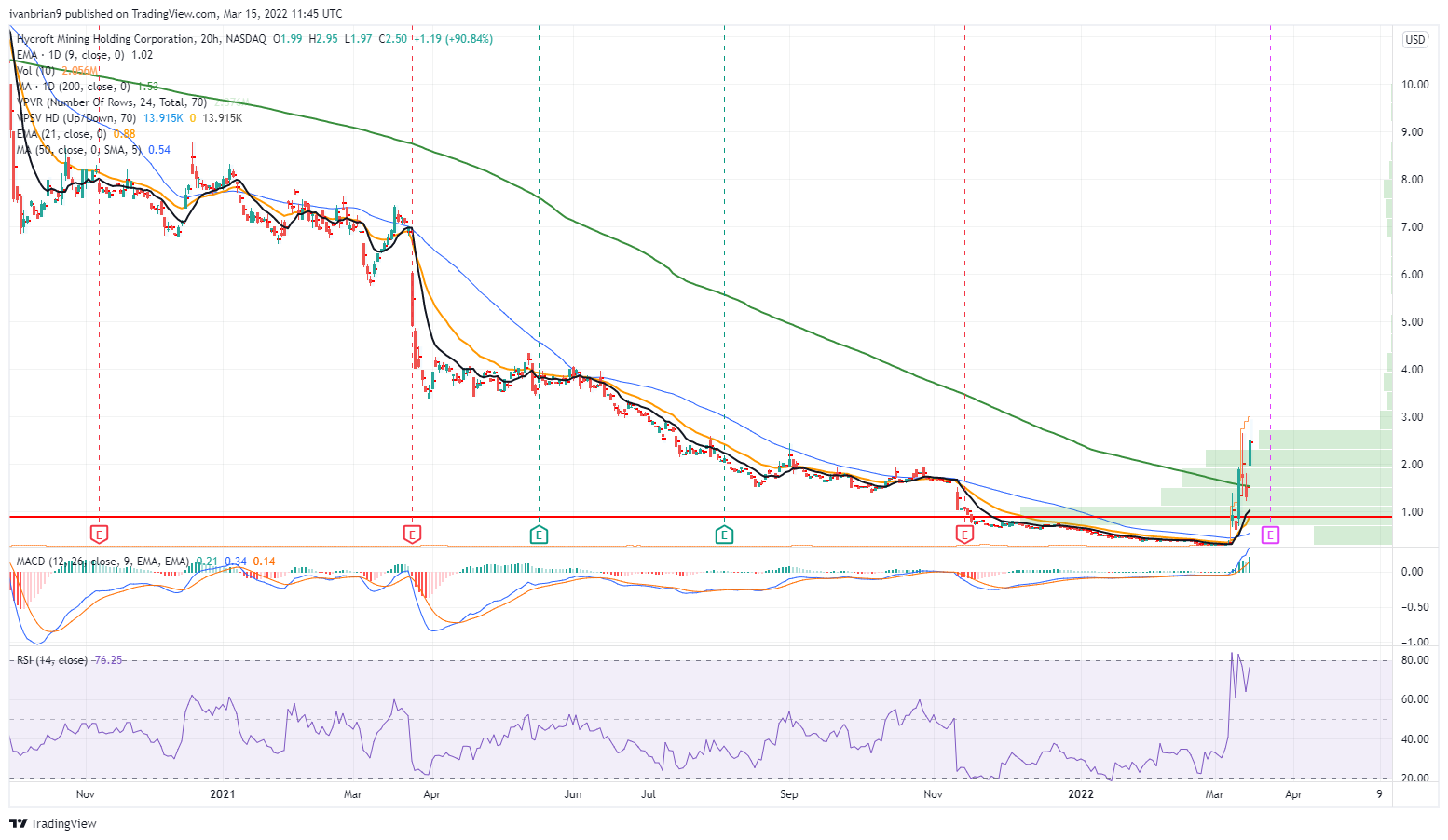 The author had no position in Hycroft (HYMC) when this article was published but has since bought put options on HYMC.