The drop came even as investors moved out of equities, with the S&P 500 Index last seen down 1.25% on what has been a mixed week in sentiment and data. The highlights of Thursday's data schedule were a faster monthly pace of growth in the PCE price index, steady personal income expansion, and slower spending growth. Personal income was up 0.5% in May, right on expectations after a 0.5% gain in the previous month.

After an adjustment for a 0.6% increase in the PCE price index, real personal consumption was down 0.4% in May after a 0.3% increase in April. Core PCE prices rose by 0.3% for the fourth straight month, slowing the year-over-year rate to 4.7% from 4.9% in the previous month. Gold briefly bounced after the US data but quickly moved back into the tight range it has been in for the past few sessions.

In other data, the Chicago PMI fell to 56.4 in June from 60.3 in May. Other manufacturing data already released have suggested slower growth or outright contraction. The ISM's national index will be released on Friday. Initial jobless claims decreased by 2,000 to 231,000 in the week ended June 25, but the four-week moving average rose by 7,250 to 231,750, continuing the string of gains.

Meanwhile, the US dollar also fell, making gold more affordable for international buyers, with the DXY dropping to 104.645 the low of the day so far. US bond yields fell sharply, which is offering a lifeline to the precious metal since it pays no interest. The yield on the US 10-year note was last seen down at 2.980%, near its three-week low made earlier at 2.97%

''In fact, gold prices have disconnected altogether from market pricing for Fed hikes over the past month, and have instead grown their relationship with the USD, pointing to a smaller magnitude of idiosyncratic flows for the yellow metal.

''While the bias remains to the downside in gold, participants will need a catalyst to shake out the complacent longs in precious metals.'' 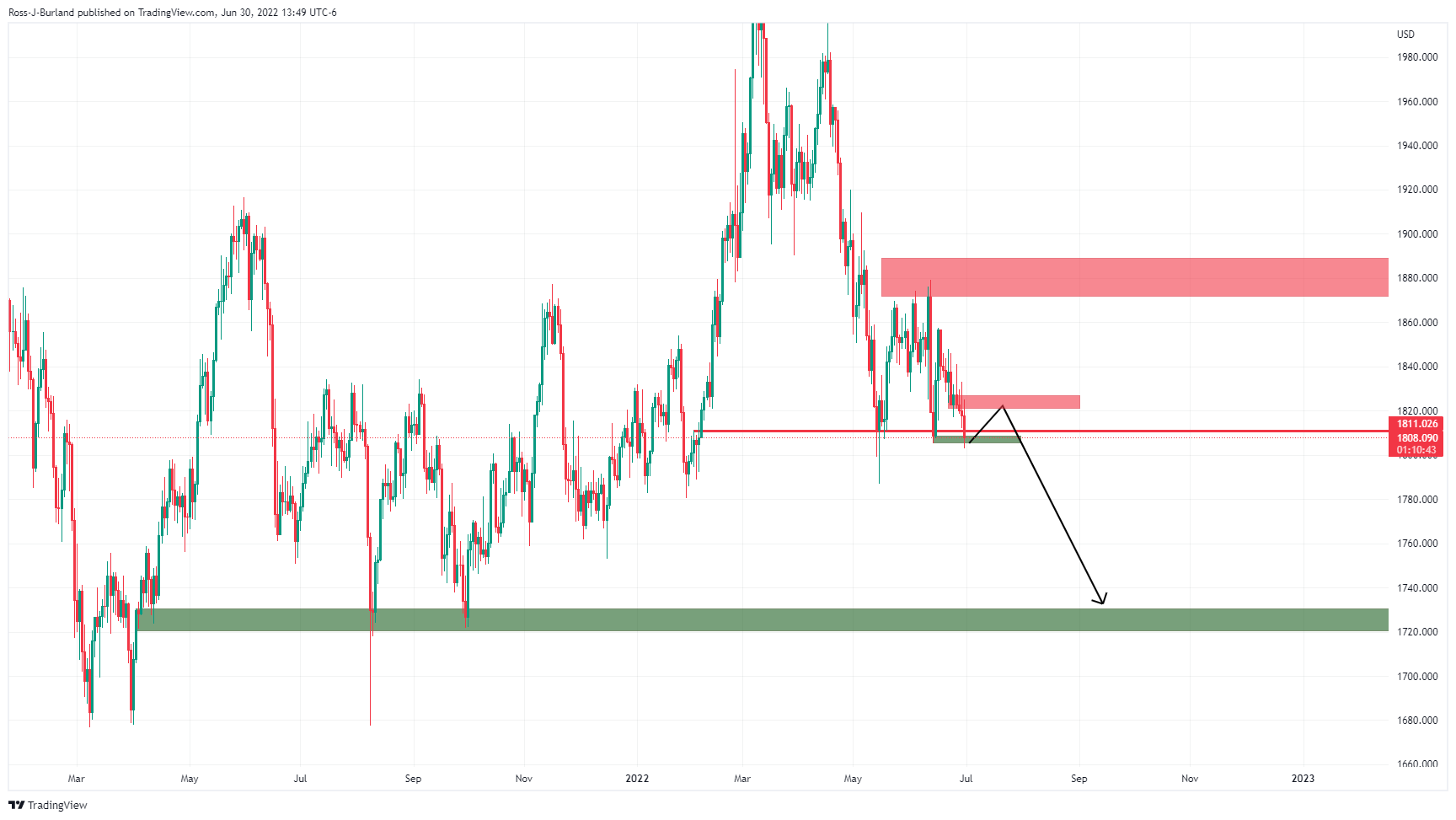 The bears have moved in on a critical area that could be broken that will give way to the potential of a deeper run towards $1,720.

GBP/USD picks up bids to extend the previous day’s recovery to 1.2100 during Wednesday’s Asian session. In doing so, the Cable pair approaches a one-week-old resistance line while also portraying the third bounce off the 50% Fibonacci retracement level of July-August advances.