The EUR/USD remains subdued amid a choppy trading day, as the market mood swings from risk-on to off continue, on “hawkish” comments by Fed officials, stagnate peace talks discussions of Russia and Ukraine, and an attack on Saudi Arab Aramco installations on Friday. At 1.0992, the EUR/USD shows the resilience of the greenback, despite being softer in the day.

As the New York session progresses, the market sentiment is mixed. European and US equity indices fluctuate between gainers and losers, while the US Dollar Index, a gauge of the greenback’s value vs. a basket of six currencies, is barely flat at 98.787.

Meanwhile, the war in Eastern Europe extends to a whole month of hostilities between Russia and Ukraine. Although there have been peace discussions, both parties have disagreed on the primary issues, as said by the Russian negotiator, early in the day on wires. He added that Russia and Ukraine are getting closer on secondary matters. At the same time, NATO’s summit in Brussels came to an end, with the US and Europe reaching an agreement on natural gas so that Europe would cut energy dependence on Russia.

Although the news is good for the Eurozone, the EUR/USD failed to react positively to it, as the pair stays parked at the 1.0980-1.1000 area.

Earlier in the day, Citigroup and Goldman Sachs analysts expected that the Federal Reserve would hike 50-bps in the two following meetings, in May and June.

On the US front, Fed speaking continues with the New York Fed President John Williams also backing up a 50 bps increase, and he stated, “If it is appropriate to raise by 50 basis points at a meeting, I will do that.”

The US economic docker featured Pending Home Sales for February shrank 4.1% from a 1% m/m increase estimated. Furthermore, the University of Michigan Consumer Sentiment Final for March came at 59.4 from 59.7, while inflation expectations stayed at 5.4% vs. 4.9% on the previous report.

The EUR/USD is still downward biased, though, in the last four trading days, the EUR/USD has been trading in a narrow range, between 1.0960-1.1000. The lack of a catalyst, plus fluctuations in the market mood, might keep the shared currency trendless. 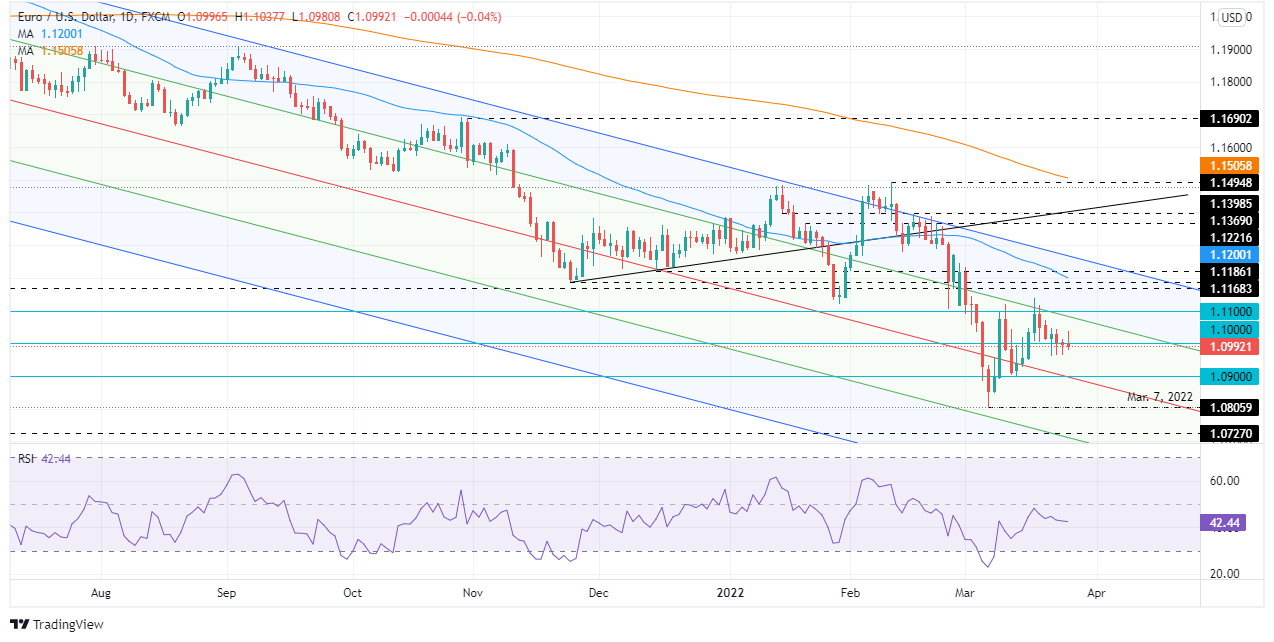