Update: Early trading in Apple is proving to be cautious just as we titled this piece. The big tech leader dropping below $145 in the first half an hour of trading as traders turn increasingly cautious ahead of results next week. The MACD looks to have made a bearish crossover and AAPL stock is just sitting on the 9-day moving average currently. Choppy trading likely ahead of the results release.

Apple shares roared back to life on Tuesday with a gain of over 2% and in the process retook some key technical levels. The move to record highs has been a nice steady uptrend breaking key technical levels identified at FXStreet. The move was triggered by relative underperformance in April and May and by a turnaround in the Nasdaq and big tech stocks. Other FAANG names had made new highs such as Facebook (FB) and Alphabet (GOOGL), but AAPL had lagged behind. Once the key $135 level was broken, the move was able to accelerate due to a lack of resistance and a lack of volume.

Tuesday's call here at FXStreet – "Tuesday is likely to see a bounce after Monday's sharp fall, and a break of the 9-day moving average would be an opportunity to get long Apple stock again. Just use a stop or some form of risk management as this is not a strong risk-reward trade. Ahead of earnings next week the direction is likely to be choppy. Keep an eye also on the Moving Average Convergence Divergence (MACD) as it appears to be about to crossover, which is a bearish signal."

This worked out well as Apple broke the 9-day moving average and continued higher. So now what, you ask? Earnings next week are still likely to see continued choppiness, so taking a longer-term view is more difficult. News has just hit the wires that Apple will launch a budget 5G phone in early 2022 and appears to be moving all models away from 4G. But until we have some clarity from results, we will take cautious positions if any.

The trade yesterday worked well, but this was a short-term scalping opportunity. Now the picture is less clear.

1. A gap had been created from Friday to Monday that has now been filled.

2. The Moving Average Convergence Divergence (MACD) indicator remains poised to cross into bearish territory, so keep a close eye on this.

3. Earnings next week mean the direction will be choppy until then. 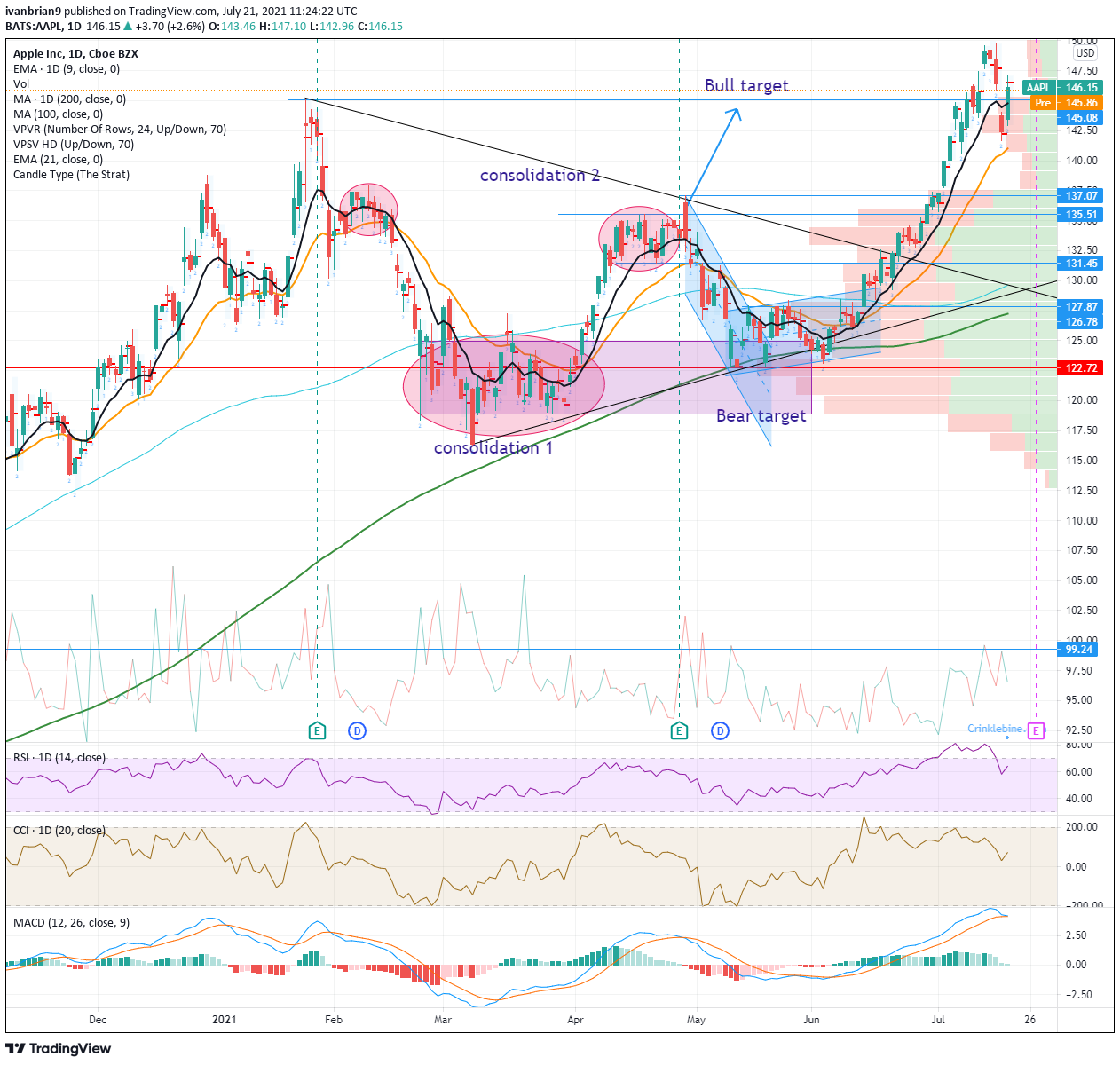 After closing the previous week in the negative territory, gold stayed on the back foot on Monday and dropped below $1,800. However, the subdued market action ahead of key macroeconomic events allowed the precious metal to stay in a consolidation phase on Tuesday.