Apple (AAPL) has been a quiet stock since its earnings release back in late October, October 28 to be exact. The earnings report was more or less in line with forecasts with earnings per share bang on at $1.24 while revenue missed slightly at $83.36 billion versus the 85.05 billion estimate. Apple's (AAPL) stock price flatlined thereafter and it appeared investors moved on the other areas. Apple had mentioned the dreaded supply chain and semiconductor chip issues which have hit so many other companies this year and that appeared to be that for the stock. But late last week things began to look interesting for Apple. Firstly the stock never really got into a bearish trend, rather it just stabilized around $150, just under all-time highs. given such an uninspiring earnings report and the fact that the stock price had such a strong run one would have expected more of a sell-off. Breaking the pre earnings report high of $153.17 was the catalyst for this latest move and Apple powered on during Thursday and Friday to register impressive gains and break $160. Apple closed on Friday at $160.55 a record high close for the stock. When a stock reacts well to average news it means sentiment is just too strong and cannot be fought. So for the remainder of the year, we expect more gains and Apple will begin to sniff out the possibility of breaking $200. About 25% is probably too far but things do get a little fizzy around the holidays. The Christmas rally usually brings joy to all bulls. Apple registered a gain of 7% last week alone so perhaps $200 is not as far away as thought.

The Apple car could make its debut by 2025 according to a report by Bloomberg late last week. The project is refocused around making the car fully self-driving according to the Bloomberg article with the car having no steering wheel and pedals. Apple declined to comment on the report. Separately Taiwan exports are still hurting from supply chain issues and semiconductor chip shortages data for October shows. Taiwan is closely watched by tech investors as many of its companies supply the tech behemoths. Foxconn is a major supplier to Apple and is based in Taiwan.

The big move was really breaking the pre-earnings high of $153.17 as this indicated sentiment after the earnings report was not as negative as previously thought. We can also see that post the earnings report Apple slid 1.82% and set a low of $146.41. Given the earnings report and issues mentioned on the conference call thereafter we would have expected that low to be the start of a bearish trend. The longer it held the more likely it was that Apple would rally. Once $153.17 was broken then it was inevitable that Apple would make fresh all-time highs. This bull in 2021 is the strongest one we have ever seen so hard to argue against its sentiment. The MACD gave a bullish crossover as did the stochastics. $157.26 and $153.17 remain supports now. Apple remains bullish above $153.17, neutral below. 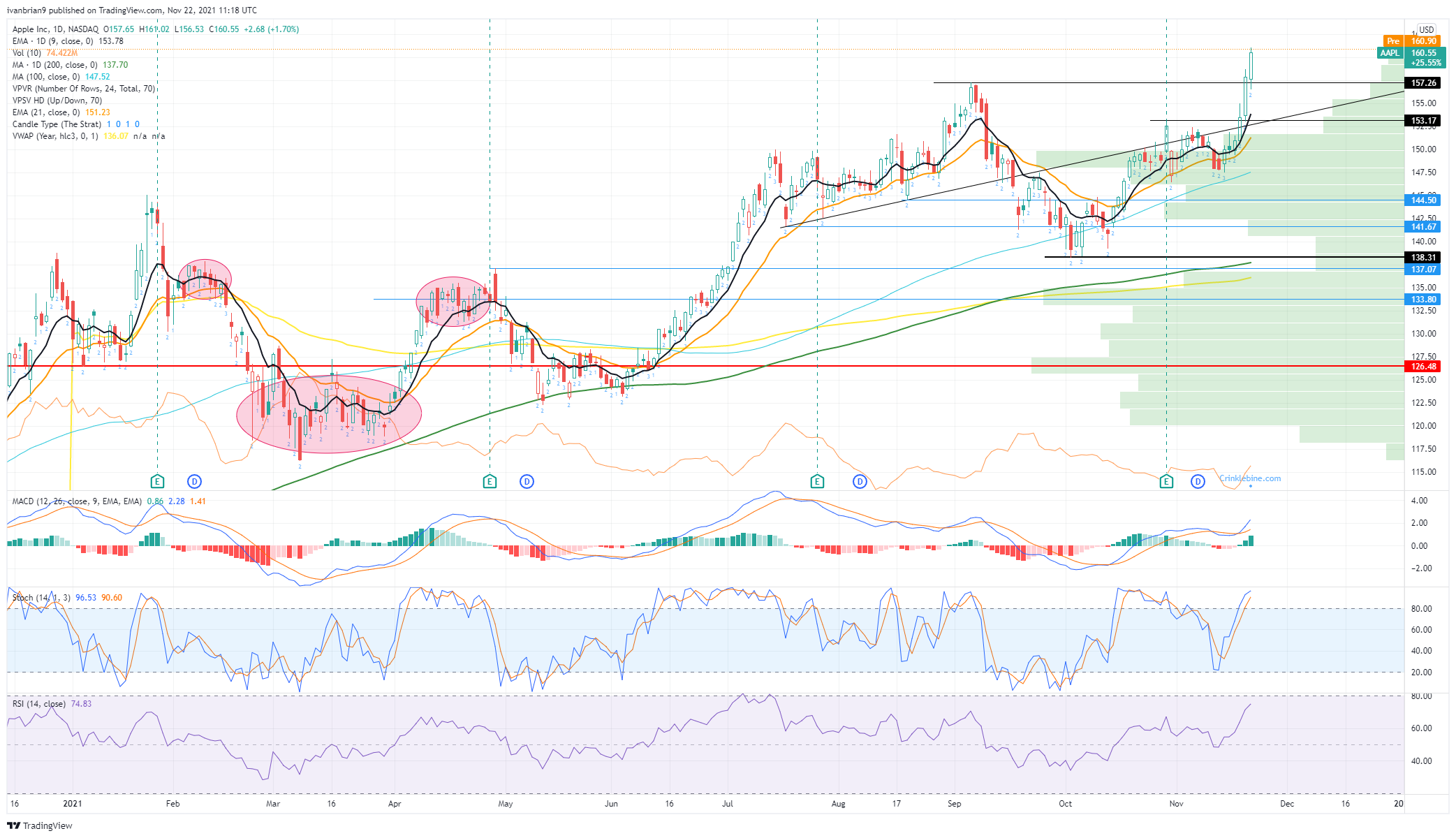