Update 2 March 25: AMC shares continue to spike higher on Thursday. The retail, meme rally is back on as more investors jump in. Hopefully not for a long term investment as AMC is not going to $1,000 as some Twitter traders are claiming. Jump in and out quickly and bag some profits on trends. Long term investments require solid fundamentals which AMC does not have.

Update March 25: AMC shares are catching a break on Thursday as retail traders return to their Gamestop and AMC memes. Recent sharp falls are probably also leading to some cheaper buying as nothing can go up or down in a straight line. The fundamentals remain challenging for AMC but short-term traders can certainly reap profits from the volatility if they are careful. AMC shares are trading at $9.53 up 5.7% on Thursday.

AMC has been one of the major trends of the US stock market this year, after experiencing stratospheric appreciation. AMC shares are up 557% year to date for 2021, and this is despite the sharp fall from January highs. The stock is up 152% in the last month alone.

AMC operates cinema theatres globally and understandably has suffered as a result of the pandemic. It operates in the US and Europe with theatres in 44 US states and 13 European countries.

The runner-up to GameStop in the r/WallStreetBets Reddit forum is in a strong cash position, having raised cash through debt, equity and asset sales during the crisis to fund future operations. In some respects, the spike in AMC shares on the back of strong retail interest may have helped the company to survive, as it enabled AMC to raise capital.

AMC secured more than $1 billion between April and November of 2020. It then took the opportunity to raise another $917 million in debt and equity between mid-December and late January of this year.

"This means that any talk of an imminent bankruptcy for AMC is completely off the table,” said Adam Aron, CEO and President.

Why is AMC stock going up? Well, the increase of capital meant that AMC would be able to survive the pandemic when many "shorts" were betting it would not. This led to a large spike in price as AMC shares had to be bought back by shorts to cover their positions. The retail frenzy also reached a fever pitch in AMC and Gamestop around this time. All this led to a huge AMC share price rebound from below $6 to over $20 as retail traders piled into the stock.

Since then, AMC shares have remained supported by the retail investment community, as AMC remains the first or second most trending stock on Twitter, r/WallStreetBets and other retail sites. The short interest remains high at 16%, but this has come down from over 30% in the early stages of the r/WallStreetBets short squeeze.

AMC shares appear too high, there is no other way to be blunt about it. This is not investible in my opinion. Short-term traders can make money just from the price movement, but those expecting the shares to double or quadruple and remain there for the long term are highly likely to be disappointed.

The company nearly went bankrupt during the pandemic crisis but managed to raise cash to avoid that outcome. In doing so, it has dramatically diluted shareholders by issuing fresh capital. AMC's number of shares has nearly quadrupled during the pandemic crisis, and as the share price has appreciated AMC's market capitalization has ballooned. It is now nearly trading at a record high valuation by market capitalization standards, as well as nearly every other metric.

AMC has major debt coming on the heels of its recent debt raise. The company has massive rents, which it has managed to defer. However, these payments will soon become due as theatres open up. During the good days of cinema-going, AMC struggled to make a profit, which is why it was targeted by short-sellers in the first place. The financial situation has worsened since then with more debt and dilution. AMC would need to dramatically increase its revenue to meet increased debt repayments alone. AMC has $5.8 billion of debt to repay, up from $1 billion in 2019.

The corporation probably needs to reopen and sell out every cinema globally for every movie for every day going forward. And even then this may not be enough. 2019 was a high point in terms of revenue creation for AMC, but even then it could not turn a net profit. It is hard to see what has changed. Demand may be pent-up, but not enough to backstop the current share price.

Too fast, too furious and too high of a price, which does not make sense in this tape. Short-term investments do not need to be sensible, but long-term investments do. Even with a daily chart of this magnitude, price is due for a correction. 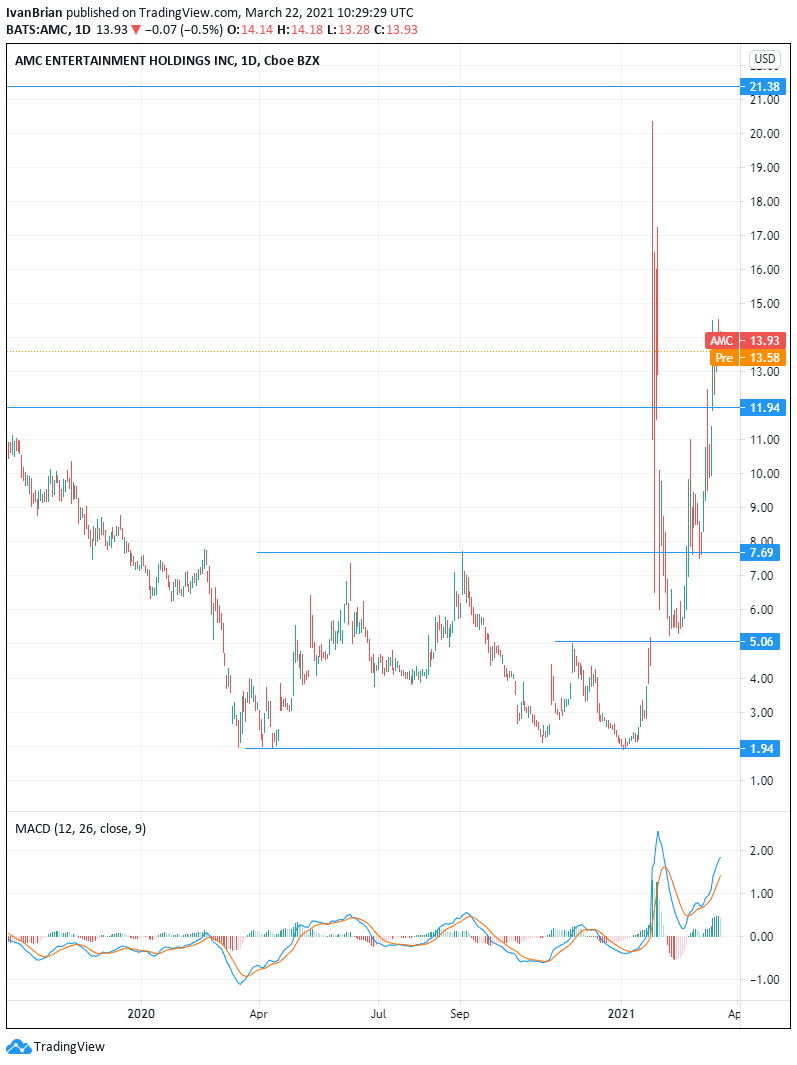 Update March 24: AMC shares struggled on Wednesday as Disney said it will release some movies on Disney+ the same day as cinemas. AMC is also suffering as a meme stock sell off spreads on Wednesday. AMC shares are currently down 4% at $10.25. Gamestop, the king meme, is down 20%.

Update: Shares in AMC are suffering a steep fall on Monday. Price is trading at $11.96, a drop of over 14%. Retail investors have been betting on AMC throughout 2021 but to survive the company had to raise capital. This diluted shareholders and increased debt. The company needs a massive jump in future revenue streams to justify its current valuation metrics.