Anyone that has been around the markets and trading for any period of time has probably heard that most traders lose money.

In fact, there’s actually an old trading adage that says:

So after reading that, before you reach for your broker’s phone number to wire out all of your money… how about I let you in on a little secret:

If you follow some simple rules and avoid these 3 mistakes, you can be in that minority of traders that actually make money consistently in the markets.

And if you are currently making one or all of the mistakes, I’ll also show you exactly how to fix it.

So let’s dive in!

1) Most Traders Enter A Trade Too Late

The first thing on my top 3 reasons why traders lose money is: Most traders get into trades WAY too late!

There are a lot of reasons this happens, but most commonly it’s because new traders are basically gambling. They’re buying stocks or options based on news, or a hot stock tip, which really isn’t what I would consider a strategy.

So let me give you a great example with a company I’m sure you’ve heard of: Uber Technologies (Yes, enemy #1 for taxi drivers worldwide.)

Last year Uber, known for its popular ride-sharing and food delivery services, IPO’d in May (2019).

With the disruption this company caused, their IPO had a lot of hype surrounding it, bringing a lot of investors to the table.

On the day of their IPO, UBER opened at $42/share and people poured into the stock.

For a few weeks, the stock had a turbulent, roller coaster of a ride all the way to as high as $47.08/share, a little over a 13% increase since its IPO.

And around this new high, more and more inexperienced retail traders piled in thinking that it would continue its bullish run with dollar signs in their eyes.

The mainstream media was continuing to hype it and more and more and investors and traders gobbled up more of the stock.

Looking at the image below, you’ll see after that high of $47 things got UGLY fast, with UBER falling day-after-day, week-after-week.

It wasn’t until November of 2019, about 7 months after their IPO that UBER found a temporary bottom at $25.58, down more than 45% from its high of $47.08… and I would bet there were a LOT of people who bought near or at the highs and were still holding at that point. 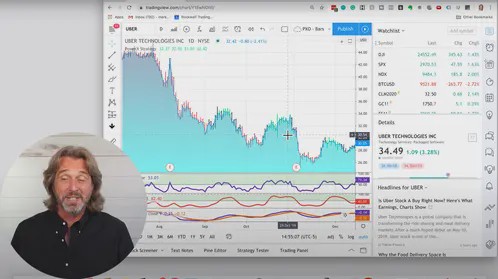 So what did retailer traders do when UBER made a bottom?

Yes, once again most (losing) retail traders didn’t get in at, or even around the bottom… once again, they piled as UBER neared its previous highs.

And as you’ll see yet again, UBER rolled over on its way to making another new all-time low this past March 2020 going all the way down to $13.71/share.

That’s more than a 70% decrease from its ATH and yes, I’m sure some investors rode it all the way to the bottom.

Now I want to share a second example with you, so let’s take a look at Amazon (AMZN).

So as you know, AMZN’s is a HOT STOCK and last year it has a crazy move where it crossed $2000/share…. and yes, just like our example with UBER, inexperienced retail traders piled in at the very top.

Once again, in the weeks that followed, AMZN’s stock tanked leaving those who’d piled in dazed and confused, now holding onto sizable losses.

So as you can see, the first of my top 3 reasons most traders are losing money is simply because they’re piling in way too late in a stock’s move, generally near a high.

Now on to reason number 2:

2) Most Traders EXIT Too Late

Yes, as you can imagine if people are getting in too late, well, they’re also typically getting out too late as well.

So let’s talk about why this happens. Why do retail traders tend to hold onto trades way too long, either turning a small loss into a BIG loss or sometimes even more painful, turning a winner into a loser?

Let’s take a look at another example with an UBER competitor, LYFT. 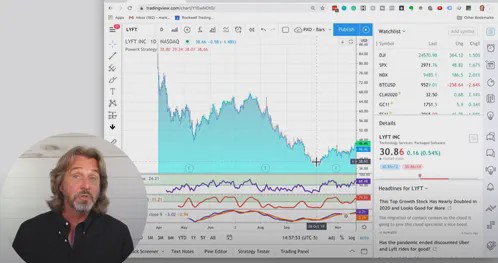 n less than two months, LYFT went as low as $47.17… and what do you think those who bought during the IPO are saying right about now:

“Oh, I’m holding it because IT WILL TURN AROUND!”

This is generally where I see traders get religious

Instead of ‘taking their medicine’ and getting out when the trade moved against them, they held on and are now pleading and praying the stock will turn around.

I hate to be the one to break it to you, but ‘hope’ is not a strategy… at least not one with a winning trading record.

Now on to number three in our list of top reasons why most traders lose money:

3) They Don’t Have A Trading Strategy

As you’ll see, I’ve saved the best for last as this one alone can help fix or eliminate the other two we just discussed.

So first, let’s answer this question: What Is A Trading Strategy?

Well, a trading strategy gives you three key pieces of information you need before ever entering a trade:

1) It tells you WHAT you are trading. Is it stocks, options, futures, cryptocurrencies? This is answered in your trading strategy.

2) It answers when you ENTER a trade.

3) It answers when you EXIT a trade and that’s exiting with a profit or loss.

Now, let’s take a look at an example here using TSLA on how I make decisions trading.

I like to look at three different indicators, that when in alignment, give me a clear signal to go long or short a stock or ETF.

As you can see on the charts, back in December of last year (2019) my indicators gave us a long signal on TSLA at around $370/share. 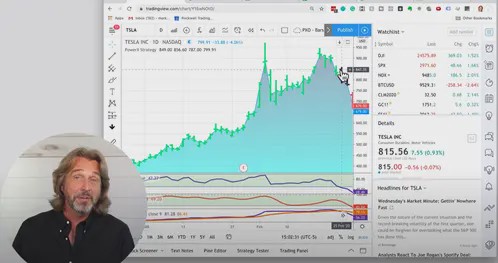 So as you can see, there’s actually no big secret to why most traders are losing money.

It’s actually pretty simple to see and correct, but it takes a plan and a little bit of discipline.

If you’re brand new and not sure where to get started, I’ve written The PowerX Strategy, a book that outlines my EXACT trading strategy for trading stocks and options.