This article, you may be happy to learn, is the last in this series about options and time value. We introduced the topic in part 1, and expanded on it in Part 2, Part 3, and Part 4. Today, we wrap up that series with the description of an important relationship between the time value of Puts and of Calls (time value is also called Extrinsic Value). Understanding this can help us to know which option strategy to choose in any particular situation.

The concept is called Put-Call Parity. It can be stated in more than one way. One pretty succinct statement is that the extrinsic value in a Call option at a given strike must be the same as that in a Put option at the same strike, after adjusting for carrying costs.

Continuing with our example from the previous installments, once again, here is an image of an option chain for the exchange-traded fund known as EFA, at a time when its price was $66: 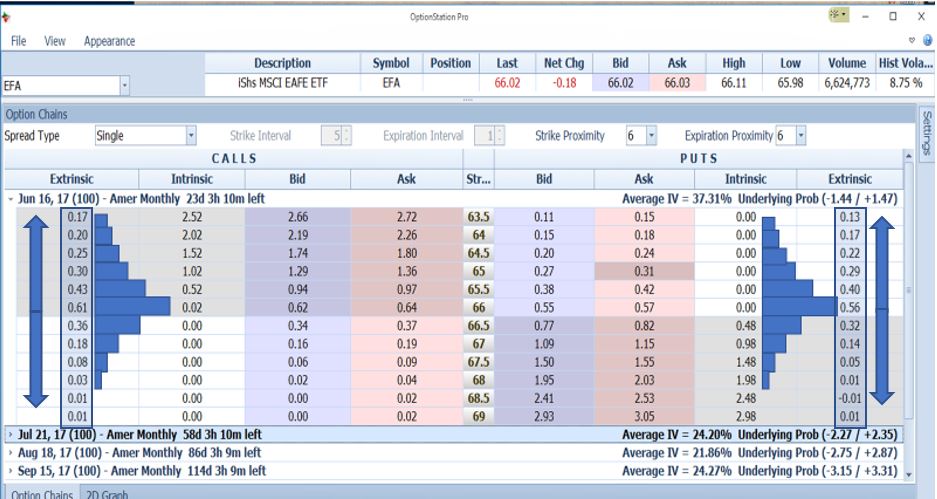 The blue horizontal bar graphs above depict the amount of extrinsic value in each option. The exact amount is shown in the columns labeled Extrinsic and highlighted in light blue – calls on the left, puts on the right.

Our point this time is that the amount of extrinsic value for the call option at each strike is very close to that for the put at that strike. This is true even where the total value for the two options at a given strike is quite different. This turns out to be important.

It turns out that at any strike on the chain, the call’s time value is a few cents more than the put’s at that strike.

Why is this? More to the point, why is it important?

Remember that the Extrinsic value is the elastic part of an option’s value. Although it is inexorably wasting away to zero over the option’s entire lifetime, it also responds to the moment’s expectations for the stock. The extrinsic value in an option can temporarily grow or shrink substantially in an instant as expectations change.

If this growing-shrinking was a random process affecting all options differently, it wouldn’t help us to know that it existed; but that is not the case. When extrinsic value grows in some options on the chain, it must grow in all of them, and in a seemingly coordinated way. When extrinsic value shrinks, likewise, it must shrink across the board.

There are other benefits, but that alone is more than enough.

All right, but then why does it happen that way?

Imagine that it didn’t. Imagine that at that 67 strike, the puts were at their actual price ($1.12, including $.14 worth of extrinsic value), but the calls had much more extrinsic value than they actually do. Let’s say that instead of trading at $.18. they were a dollar higher, at $1.18. The calls would have $1.18 of time value, which would be “too much” time value compared to the puts’ $.14, by about a dollar.

Both buying puts and selling calls short are bearish positions (both gain if the stock goes down and lose when the stock goes up). To hedge against upward stock movement, the trader would also need to buy 100 shares of stock. The interest cost to borrow the money with which to buy each share of stock and hold it until expiration would be $.04.

Whatever the gain or loss on the put/call combination, the loss/gain on the stock will exactly cancel it out, except for a profit equal to the difference between the original extrinsic values of the calls and puts – a profit of $1.04 per share. Subtracting the interest cost of $.04, the net result would be a gain of $100, or $1 per share, no matter what. This $1.00 is exactly the amount by which the calls were originally overpriced.

Any small mis-pricing of time value across the option chain is instantly detected by the computer systems of big traders. So, the mis-pricing is never allowed to grow beyond a penny or two.

Ultimately the mathematical precision of the relationships between option prices is a force that we can harness. That gives us a strong edge – and that’s what a trader needs.

GBP/USD has been unable to recapture 1.2950 as markets are somewhat less worried about coronavirus. The EU's mandate for post-Brexit talks confirmed demands for a level-playing field that the UK rejects.

Coronavirus spreading in Europe keeps investors on their toes. Wall Street set to extend its slump, despite two days of substantial losses. USD/JPY bearish as long as below 110.65, a Fibonacci resistance level.

GBP/USD has been unable to recapture 1.2950 as markets are somewhat less worried about coronavirus. The EU's mandate for post-Brexit talks confirmed demands for a level-playing field that the UK rejects.

Coronavirus spreading in Europe keeps investors on their toes. Wall Street set to extend its slump, despite two days of substantial losses. USD/JPY bearish as long as below 110.65, a Fibonacci resistance level.