We introduced the topic of options and time value in part 1 of this series, and expanded on it in Part 2 and Part 3. Today we’ll continue with a discussion of the effect of volatility on time value.

In the last installment, we showed an image of an option chain for the exchange-traded fund called EFA. We added the blue bar charts within the option chain to show graphically how much time value there was in each option. Here is that diagram:

Note the large amount of time value (wider blue bars and larger numbers in the column labeled Extrinsic) for the strike prices closest to the ATM strike, and progressively smaller bars at strike prices farther away from the ATM strike. This illustrates that stock price has a large effect on time value. To further demonstrate that, here is today’s look at EFA’s option chain: 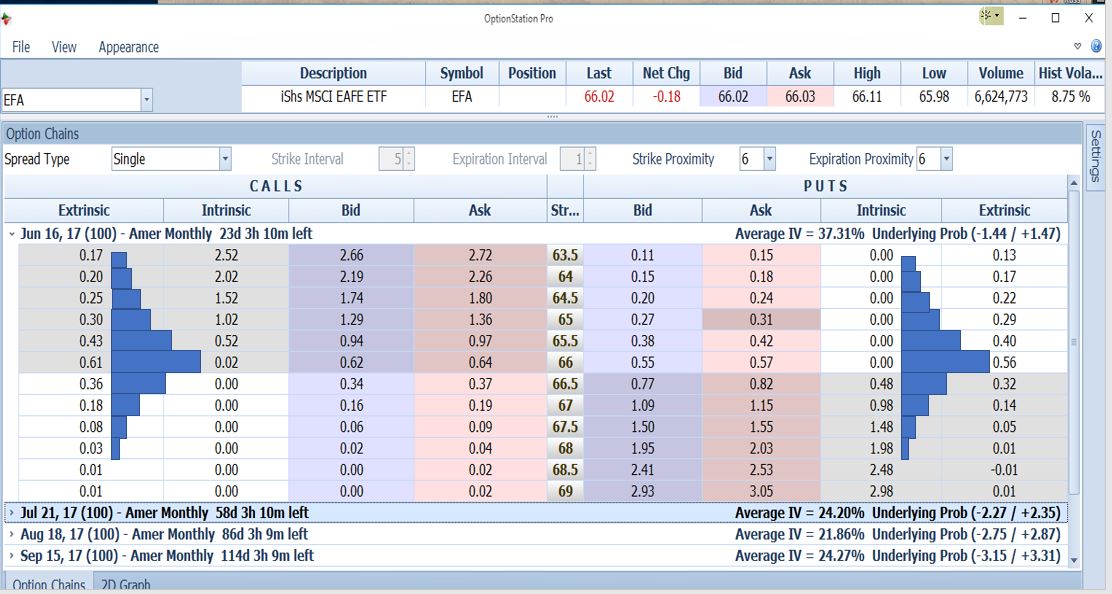 As of this snapshot, the price of EFA had moved up from around $64 to just about $66.00. Notice that in the earlier diagram, the largest amount of time value was at the $64 strike, while in the later one it’s at the $66 strike. As we described before, as the price of EFA changes, you can think of the whole bar chart sliding up and down the chain intact, lining up the widest bar at the strike price nearest the current stock price at all times.

So, time is not the only determinant of time value. Stock price also plays a big part.

With this image of the sliding bar chart in mind, let’s think about the effect of Implied Volatility. This is the name we give to the impact on option prices from changes in market expectations for the stock.

In the second diagram, we see that the Extrinsic (time) value in both the call and the put at the 67 strike is about $.15, give or take a couple of cents. This is the market’s overall or composite opinion about how much they’re willing to pay for the time value in these options. But what if something happens to change that opinion? Let’s say that a story is published that is very negative for EFA, so that people suddenly come to believe that EFA’s price is likely to drop sharply?

In that case, many people would want to buy Put options on EFA. Some of them would be protecting their existing EFA positions. Others would be buying them as a speculation, looking to profit from the drop in the stock (and therefore a rise in the value of the puts which they’d sell later at a profit).  All this sudden demand would push up the price of the puts.

What happens in the case of sudden excess demand for put options for EFA, is that the Extrinsic value of all EFA puts increases. This ripples through all strikes and all expiration dates for the puts, even though only a few strikes may see increased trading activity. This is because all options at all strikes and expirations must share certain relationships between their prices. These relationships cannot get out of order or there would be arbitrage opportunities (risk-free profit opportunities). You can see now why the list of options is called a chain. A more accurate name might be a chain-link fence. Movement in any part of it is immediately transmitted to every other part of it.

When high demand in any part of the chain leads to higher prices throughout the chain, which it must, that change registers as an increase in implied volatility. That’s because, using the option pricing model, it is possible to calculate that if this option is selling for, say, $1.09, while it is $1 away from the stock price with 23 days to go, then that implies that the buyer expects EFA to change in price at an annual rate of 7.47% over that 23 days. 7.47% is that option’s implied volatility.

If the buyer thought that EFA would move at a rate faster than 7.47%, then he would be willing to pay more than $1.09. If he increases his bid to, say, $1.25, then we could again calculate what that implied in terms of his price expectation. It might now imply that he believed that an annual rate of 8.5% was possible.

In terms of our diagrams with the blue bar charts, an increase in implied volatility would cause the amount of time value in all puts to expand roughly in proportion to the amount of extrinsic value they had to start with. Those with the greatest time value would get a big boost, and those with less, a smaller one. So, all the blue bars would get wider. This would benefit anyone who owned puts (any puts), and be correspondingly bad news for anyone who was short puts.

The opposite can happen as well. If some uncertainty about the stock is resolved, so that expectations for future price movement of the stock goes down, then all of the puts on the chain would drop in value and all of the blue bars would shrink. This would be bad news for the owners of puts and good news for the exactly equal number of people who were short those puts.

You can think of the blue bar charts constantly expanding and contracting as expectations for the stock’s price movement changes with each new piece of data that could affect the stock.

Meanwhile, the entire bar chart is slowly shrinking due to another separate force, as each passing day reduces the amount of stock price movement that could still happen in the remaining time to expiration.

So now we know that the amount of time value in an option:

Once we get these concepts sorted out in our heads, trading options becomes easy