XRP price is awaiting a 46% move to the upside after a bullish chart pattern has emerged. In addition, the cross-border remittance token may be anticipating a small victory in the SEC v. Ripple case as developments continue to unravel.

XRP price on route for a 46% climb

XRP price is forming a bull pennant on the 12-hour chart, suggesting a 46% upswing should the governing chart pattern be robust. The optimistic outlook offered by Ripple may come to fruition as the blockchain firm is about to come close to a dispute hearing soon.

Judge Sarah Netburn on the SEC v. Ripple case has been scheduled for a telephone conference to settle a privilege dispute over the agency’s internal documents over Ether and XRP. The regulator has long argued that these files are protected by the deliberative process privilege (DPP), but this argument has been dismissed twice previously by the judge.

The court has deemed the documents relevant to Ripple’s fair notice defense and could shed light on the agency’s contradictions over its decision on determining whether XRP is considered to be a security.

With a small win for Ripple, positive sentiment could also impact XRP price. Currently, the cross-border remittance token is battling resistance at the 78.6% Fibonacci extension level at $1.21, and a break above this level could see the coin tag the upper boundary of the chart pattern at $1.23.

Only a powerful break above this level could see XRP price reach the aforementioned bullish target given by the bull pennant pattern at $1.76, coinciding with the 161.8% Fibonacci extension level.

However, Ripple must also overcome the swing high at $1.35 and the 127.2% Fibonacci extension level at $1.53 before the optimistic target could be in the offing. 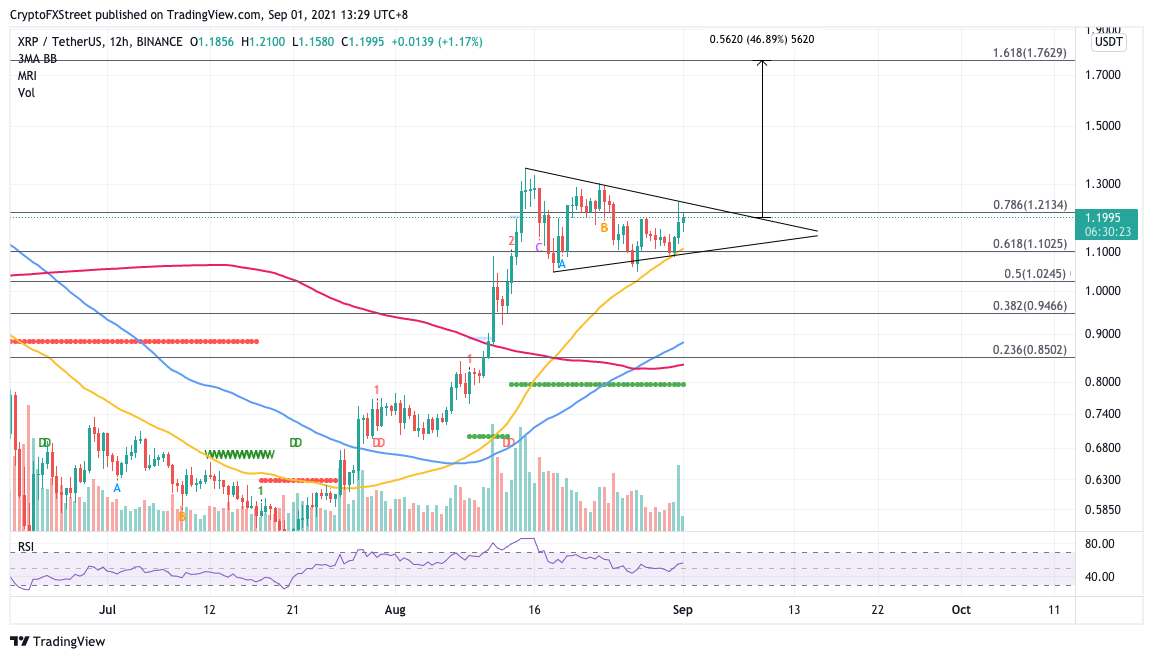 Investors should also note that only a surge in volume accompanied with a slice above the upper boundary of the chart pattern would unravel the bullish narrative.

An alternative also exists for XRP price, should the bullish outlook dissolve. The current setup also suggests that Ripple could be forming a symmetrical triangle, which would only give the token a measured target of a 22% surge to $1.47 if it slices above the topside trend line of the chart pattern.

Failure to sustain itself above $1.21 would see XRP price discover support at the lower boundary of the triangle, corresponding to the 50 twelve-hour Simple Moving Average (SMA) and 61.8% Fibonacci extension level at $1.10. While this level would act as a substantial line of defense, further support may arise at the 50% Fibonacci extension level only if XRP sees a spike in selling pressure.