Bitcoin block reward halving will take place in five days. Speculation is mounting and investors are balancing on the edge with a myriad of expectations in regards to the impact of the event. The halving occurs every four years; it a process that results in mining rewards being reduced to half. The main purpose of the halving in the Bitcoin network is to control inflation as well as to ensure that Bitcoin hits the 21 million maximum supply.

There have been discussions and opinions as to whether this halving will have the same impact as the previous halvings where Bitcoin price rallied in the months following the events. Some investors are choosing to be strongly bullish with predictions of up to $80,000 (by the end of 2021 according to PlanB, a pseudonymous crypto analyst).

Consequently, one guaranteed impact of the halving is its effect on mining rewards. For this reason, miners are working around the clock to ensure that they remain profitable after the halving. Some of them are upgrading to new equipment to improve the efficiency of the process.

Bitcoin hash rate surges ahead of the halving

In the past few weeks, the network’s hash rate, which measures the computational power within the network has rocked to new all-time highs. This parameter always rises and falls on the account of the miners’ contribution to the network and shows the coin’s fundamental strength.

At the same time, the mining difficulty has also increased significantly; an indication that miners are working on bolstering their efficiency to safeguard their profitability. Messari, a blockchain data platform wrote in a recent blog post:

After its third upward difficulty adjustment in a row, Bitcoin difficulty level is approaching its all-time high. Hash rate is up as much as 25% since its post-Black Thursday lows following Bitcoin’s recent price recovery. 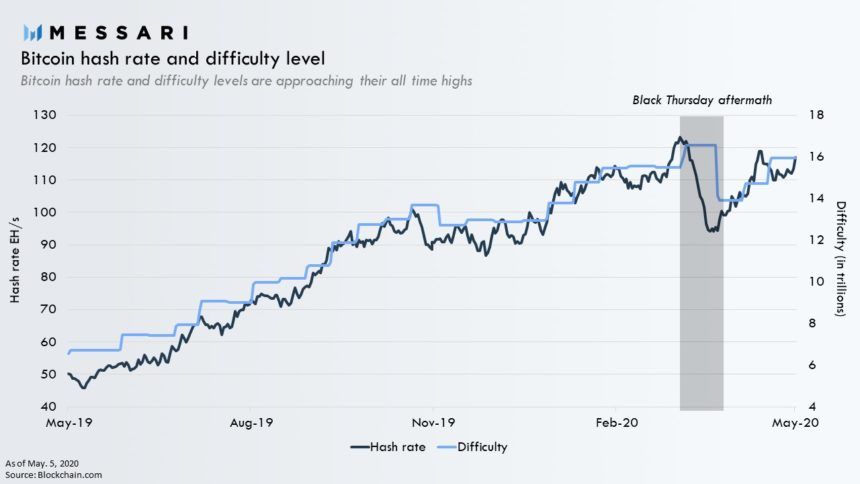 At the time of writing, Bitcoin is trading at $9,024. The price action has been lethargic throughout the Asian session. However, downward price action has hit a wall at $8,922 (intraday low). On the upside, Bitcoin stalled at $9,075 (intraday high) ahead of the resistance at $9,100.