UPDATE: Ethereum price continues its rout on Wednesday as it tests the psychological $1,000 mark. ETH is seeing again +10% losses over the past 24 hours, which adds up to a 40% value reduction over the past week. It is difficult to keep making Ethereum price predictions with the current market behavior, which is aggregating heavy risk-off positions and demand for US dollars with the own issues of the cryptocurrency market. It is looking more and more like the Terra collapse triggered a perfect storm which has put the highly leveraged crypto market in heavy trouble. The Celsius trouble with Lido Staked Ethereum (stETH) is added to the problems now faced by Three Arrows Capital, one of the biggest crypto hedge funds, which has seen $400 million liquidations through the whole ecosystem cataclism. The market is awaiting with high tension the Federal Reserve Interest Rate decision later on Wednesday, but some Bitcoin price predictions are already seeing the leading cryptocurrency falling below the $20,000 mark.

Ethereum price plummeted in response to the sale of 65,000 Ethereum on Uniswap. The major squeeze negatively influenced the Ethereum price, driving a bearish sentiment among holders.

Ethereum mining becomes unprofitable for the first time since 2020

Ethereum mining has become unprofitable for many users connected to the traditional energy grid for the first time since 2020. Ethereum prices hit a low of $1,188 while energy prices skyrocketed. With soaring electricity costs in New England, Connecticut, Maine, Massachusetts, New Hampshire and Rhode Island, the cost is higher than the Ethereum reward for the same GPU. Therefore, miners paying more than $0.245 per kWh are currently incurring losses. 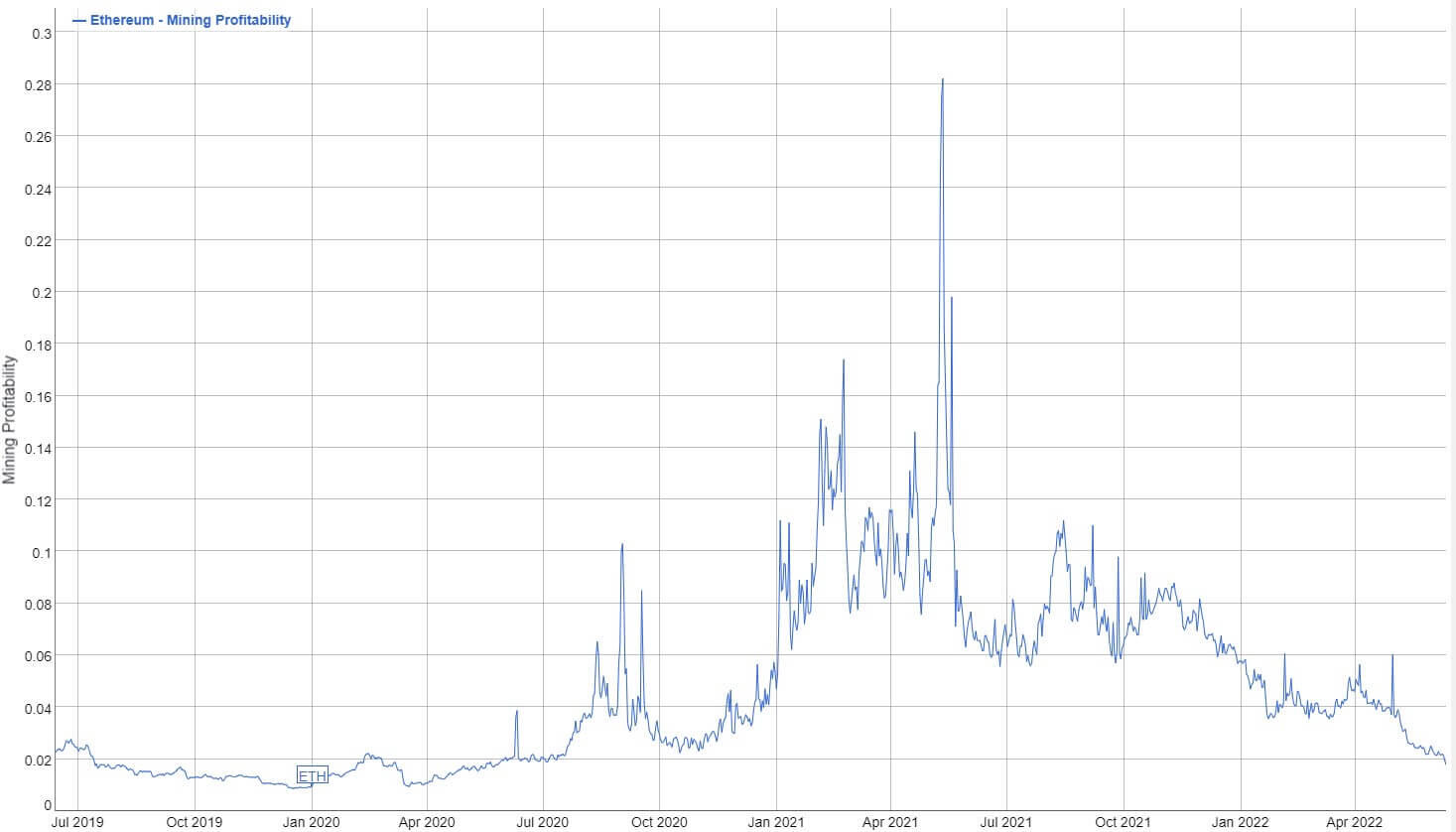 The profitability of mining Ethereum with GPUs has steadily declined. At this point, it is more cost-effective to buy Ethereum instead of mining or spending on electricity.

Ethereum price could hold $1,000 level according to experts

Michael Edward Novogratz, the CEO of Galaxy Investment Partners, believes the Ethereum price could plummet to $1,000 and hold this level in the current downtrend. Novogratz believes Ethereum is closer to “the bottom” than US equities, as he commented at a Morgan Stanley conference..

Novogratz was quoted as saying,

Until I see the Fed flinch, until I really think, OK the economy is so bad, and the Fed is going to have to stop hiking and even think about cutting, I don’t think it is time to really deploy lots of capital.

How Lido staking dominance poses a threat to Ethereum price

Danny Ryan, a researcher at the Ethereum Foundation, put forward this narrative in an article titled the risks of LSD (Lido staking dominance). Ryan recommends setting a threshold limit for all Ethereum stakers and warns investors to limit their exposure to the protocol for risks of centralized attacks. It reads:

Lido passing 1/3 is a centralization attack on PoS. We’re bad at assessing tail risk, but staking in Lido at these thresholds has a lot of it.

Based on data from Dune Analytics, Lido dominates ETH2 liquid staking with a 90.8% balance, over 4 million ETH staked. The team at Lido argues that it uses 21 validators, and centralized entities do not provide this kind of transparency.

I think it’s too soon to impose self-limitation, if ever. You could easily imagine a more centralized or more malicious entity with no self-limitation racing past Lido.

Lido’s stETH is a derivative token representing staked ether. stETH lost its peg this week – the token previously traded nearly at par with Ethereum. Since each stETH represents one staked Ethereum token and can be redeemed for 1 ETH in the future, after the merge, the dramatic de-peg led to a decline in stETH price.

stETH price plunged, trading at about 97% of Ethereum price in May 2022. Based on data from Dune Analytics, stETH was trading just above 93% of Ethereum price on Monday, June 13. Since Terra’s UST collapsed recently, the crypto community is drawing parallels between stETH and algorithmic stablecoin TerraUSD.

Lido has responded to this narrative on Twitter, explaining to the community that,

The exchange rate between stETH: ETH does not reflect the underlying backing of your staked ETH, but rather a fluctuating secondary market price. The market is naturally finding a fair price for stETH as some participants need to find liquidity.

Why Ethereum price plunged on Uniswap

On Monday, June 13, Ethereum price on Uniswap nosedived to $950 when compared to other cryptocurrency exchanges across several trading pairs. A large wallet investor dumped 65,000 Ethereum in exchange for stablecoins, driving a major squeeze comprising $100 million of liquidity in the altcoin.

This event drove Ethereum’s spot price 20% lower than other cryptocurrency exchanges. The whale was motivated to sell massive amounts of Ethereum because of a liquidation risk on an over-leveraged position where

Since this was an over-leveraged position, the whale cut their risk and sold more than 65,000 Ethereum coins on Uniswap and reduced the liquidation price.

Ethereum price could swing low to $1,073 level if the altcoin’s downtrend continues. A decline below the support zone at $1,000 could push the Ethereum price to $950.

Two Ethereum price points to watch out for

FXStreet analyst Akash Girimath is looking forward to a retest of a declining trend line in Ethereum around the $1,800 level. For more information and key support and resistance levels in Ethereum price, check out this video: