Also read: Why Shiba Inu price is back where it traded one year ago

Influencers that target financial investors, popularly known as “finfleuncers”, now risk five years of jail time if they break laws on financial advice in Australia. The Australian Securities and Investments Commission (ASIC) says that influencers may need a license to give advice on investments.

A survey conducted by ASIC revealed that 33% of investors between 18 and 21 years of age follow finfluencers. The survey revealed that the behavior of 64% of young people in Australia is influenced by influencers and their endorsements.

Influencers who discuss financial products and services online comply with the financial services laws. If they don't, they risk substantial penalties and put investors at risk.

The ASIC has circulated an information sheet to guide influencers. The sheet gives a number of examples of statements that qualify as financial advice and warns against making misleading or deceptive remarks about financial products. A violation of the guidelines could count as an event where the influencer broke the law.

I think it's some of their clearest and best comms they've ever put out, potentially ever. Obviously everyone will now madly scramble to become compliant, but that was the point.

Interestingly, ASIC pointed out that sharing affiliate links that send investors to online brokers could count as financial advice and this could require a license.

The Financial Conduct Authority (FCA) is the conduct regulator of around 51,000 financial services firms and markets in the UK. In February 2022, the authority urged caution over the use of influencers in marketing of financial products, sharing financial advice.

The watchdog was quoted as saying,

Retail investments' use of social media influencers on various platforms to market investments is becoming a concern for us. Firms should ensure they have taken appropriate legal advice to understand their responsibilities prior to using influencers.

Charles Randell, FCA Chairman, accused influencers who promote cryptocurrency by accusing them of fueling a “delusion of quick riches.”

The UK Treasury dealt with the menace of crypto-asset promotions and misleading financial advice by proposing new laws in January 2022. These laws make “qualifying crypto-assets" subject to the same rules as other financial promotions, applied to stocks, shares and insurance products.

In January 2022, Spain’s National Securities Market Commission, also known as the CNMV, unveiled plans to implement new rules for the advertising of cryptocurrencies. This includes the promotion of crypto assets on social media platforms by influencers.

Spain has therefore tasked its stock market watchdog with the authorization of mass campaigns and the responsibility of ensuring that investors are aware of associated risks.

The Spanish government had issued an official bulletin for advertisers asking them to inform the CNMV at least 10 days in advance and share the content of campaigns targeting more than 100,000 people.

The volatility in cryptocurrency assets has garnered the attention of regulators worldwide, and financial authorities fear the financial system is at risk if crypto assets and their marketing activities by influencers are not monitored.

this is the dumbest, most ridiculous shitcoin I’ve ever seen. And that’s why I’m all in https://t.co/NwD0pTO4dQ

Paul failed to reveal that he was friends with the project’s creator. Dink Doink was actually their idea together and he received a large allocation of the cryptocurrency at its launch. While investors poured in capital expecting to receive shares of a cartoon character that would entitle them to a portion of the proceeds when it featured in a TV show or a movie, Dink Doink’s price plummeted to a fraction of a cent, wiping out nearly all of its market value. Paul faced backlash and criticism from his followers.

Matt Damon, a popular Hollywood star, convinced investors to buy Bitcoin or other cryptocurrencies through his Crypto.com ad that said, ”fortune favors the brave.” Investors that purchased Bitcoin at its near-record high are currently under water and have substantially less funds than their initial investment.

When Damon featured in the advertisement that was aired on television and online, it was a turning point for the crypto community, mass euphoria since Bitcoin price crossed $58,000 in October 2021. 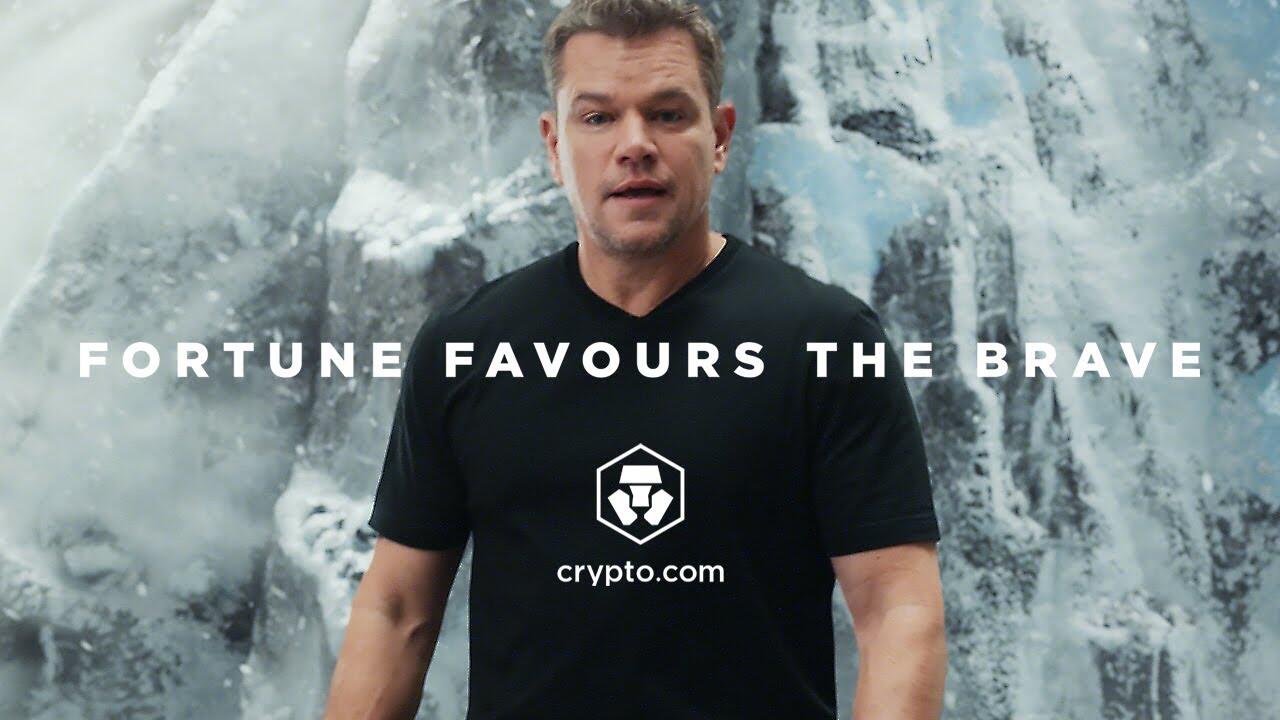 Matt Damon in a Crypto.com ad

Crypto influencers dig gold, looking for the next Dogecoin

Kim Kardashian, Floyd Mayweather and Paul Pierce are other celebrity influencers known to have made millions of dollars endorsing dubious cryptocurrencies. These celebrities have urged their followers to pour money into obscure coins that crash overnight or less-popular collections of NFTs.

There have been instances of failure in disclosing personal and financial ties to projects advertised on their social media handles, and this is considered a potential violation of federal marketing regulations.

John Reed Stark, former chief of the internet enforcement branch at the Securities and Exchange Commission criticized such behavior by influencers and said,

You have this shameless profiteering from celebrities and others, who aren’t at all disinterested or impartial. There is a lot of potential for harm.

In the (near) future, every person will have a parallel digital identity. Avatars, crypto wallets, digital goods will be the norm.

In the (near) future, every person will have a parallel digital identity. Avatars, crypto wallets, digital goods will be the norm. Are you planning for this?

Witherspoon asked her followers if they were planning for this, and there was no specific reason for sending out the tweet. However, soon Witherspoon was hit for “scam artistry” slammed for misleading crypto advertising, lack of disclosures.

There have been instances of celebrity influencers getting slammed with lawsuits from investors. Kim Kardashian, Floyd Mayweather and Paul Pierce are currently facing a lawsuit for the marketing of EthereumMax, an obscure cryptocurrency project.

Kim, Floyd and Paul are among seven celebrities hit by the lawsuit. The popular star from “The Kardashians” show had asked over 200 million followers on her Instagram,

Are you guys into crypto???? This is not financial advice but sharing what my friends just told me about the Ethereum Max token!

EthereumMax lost 97% of its value within seven months and celebrities that promoted the token are now in hot water. Ryan Huegerich filed the class action lawsuit on January 7 in the US District Court for the Central District of California and accuses these celebrities of making

false or misleading statements to investors about EthereumMax through social media advertisements and other promotional activities.

An EthereumMax representative told the Wall Street Journal that Kim Kardashian’s post was simply intended to raise awareness of the project and its utility.