Bitcoin holders are unshaken by the spike in volatility, though retail sentiment has flipped to permanently bearish. Analysts expect the altcoin to revisit the $50,000 level shortly.

Bitcoin rally is imminent as accumulation by holders continues

Historically, a supply shock is followed by an adjustment in the asset’s price.

Dropping exchange reserves are likely to trigger a supply shock, and analysts expect Bitcoin’s price to hit $50,000 in the short term.

Pseudonymous cryptocurrency analyst and trader @TraderCoz expects BTC to hit $50,000 if the price holds above $47,300 despite a pullback.

Broke out of our range that we were stuck in for a week or so.

Since the level of available Bitcoin supply across exchanges is close to when the asset rallied to $65,000, prevailing supply shock may push the price closer to breakout.

Interestingly, another critical factor in the Bitcoin price rally is accumulation by whales or large wallet investors (holding between 100 to 10,000 BTC). Ahead of the September 7 flash crash, millionaire addresses dropped their BTC holdings by nearly $3.6 billion.

BTC price plunged by 15% after whale addresses sold over 70,000 coins. Large wallet investors continued accumulating through the dip and have added 60,000 BTC in the past three days. This implies that Bitcoin’s second leg up is closer than expected. 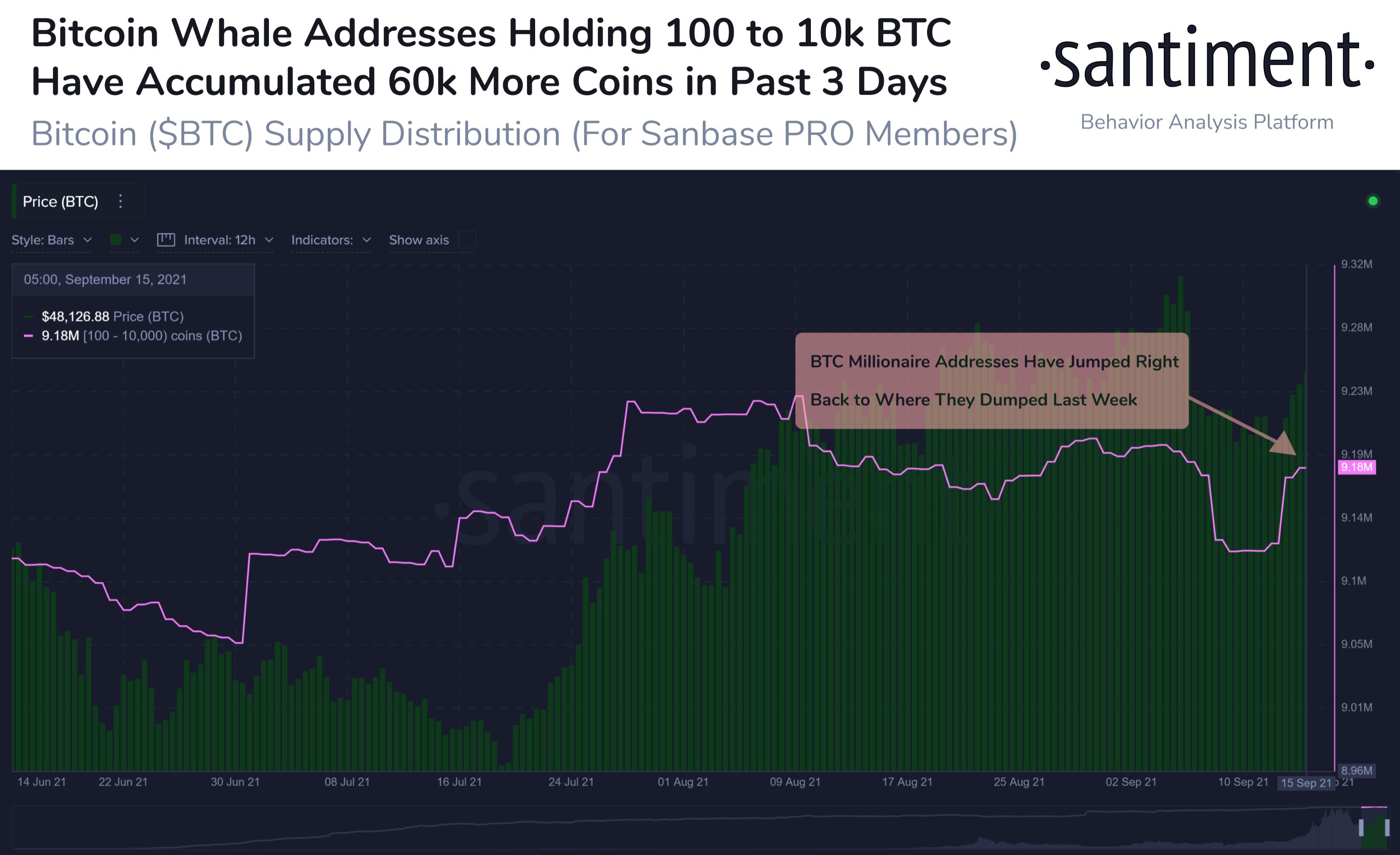 Wallets holding BTC for over a year (old hands) have nearly stopped spending their Bitcoin. No redistribution of BTC from old hands signals firm conviction of holders in a bull run.

At the time of writing, Bitcoin price is back above $48,000, and Net Realized Profit/Loss, an indicator that shows whether investors are selling at a profit or loss, has turned positive again. Bitcoin holders are now selling the asset at a net profit, and buyers across exchanges are absorbing the sold coins.

A few #Bitcoin holders were shaken out over the last week, realising losses on-chain.

Stronger hands stepped in and bought the dip.

As $BTC breaks above $48k, net realised PnL has returned positive, and the market is absorbing those profitable spent coins. pic.twitter.com/ktfWo9mtGF

As the hype around “buying the dip” is getting less relevant, retail traders are bearish, and the fear and greed index, an indicator of the market sentiment toward BTC, has turned neutral. These changes are expected to positively impact the asset’s price and push it closer to breakout, fueling a second run to the $65,000 level.

FXStreet analysts have predicted that Bitcoin price could jump to $51,000.