The price of Bitcoin (BTC) is attempting to break the $60,000 resistance level after more than a week of ranging.

Whale clusters show that $57,046 and $60,045 are the crucial support and resistance areas in the short term.

In other words, the probability of a strong breakout in the foreseeable future would increase substantially if Bitcoin stays above $57,046 and continues to test $60,000 resistance.

Why whale clusters are important for Bitcoin

Whale clusters form when high-net-worth investors buy or sell Bitcoin at a certain price and do not move their holdings thereafter.

As such, a whale cluster support typically serves as a strong macro support area for Bitcoin because whales tend to buy more when BTC falls to a level where they initially bought BTC.

On the flip side, a whale cluster resistance area would likely hold up as a sell area because whales are more likely to wait until their breakeven price to sell their positions.

According to researchers at Whalemap, the two key resistance levels for Bitcoin in the near term are $60,045 and $61,062. On Wednesday, the researchers noted:

“$BTC is back. Bouncing perfectly from whale supports so far. This is a good sign: in bear trends, whale resistances work better than supports and vice versa for bull trends. Whale supports are back to business now which means the trend has shifted. April should be quite fun.” 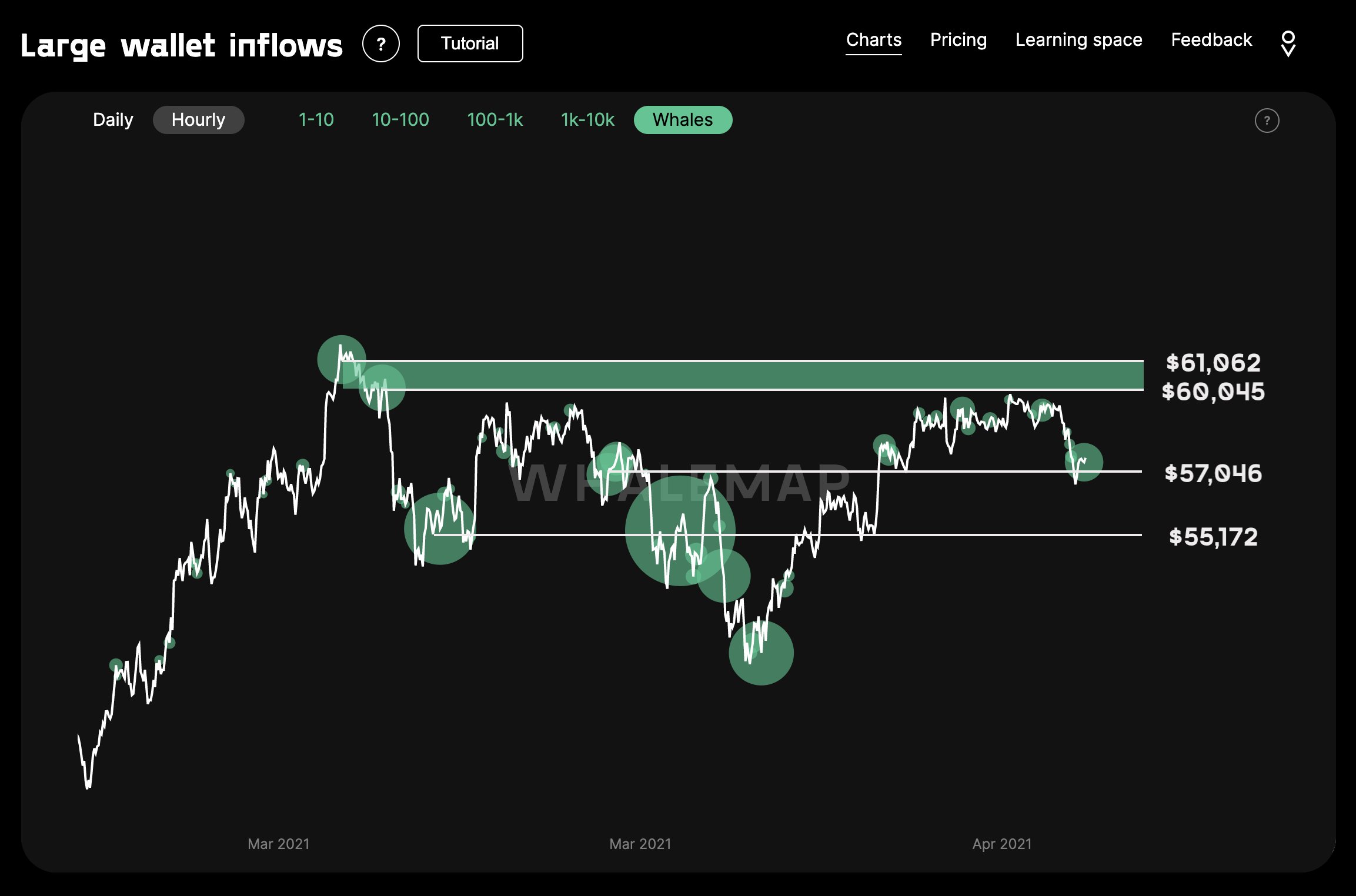 Since then, the price of Bitcoin has been ranging and consolidating between the resistance level and the $57,000 support.

Based on this trend, the researchers added that this could be the calm before the storm, anticipating a spike in Bitcoin’s volatility, which is currently at the lowest levels since November 2020. They wrote:

“The support resistance battle is intense. Levels from last week are working pretty well. Bitcoin is being capped by the $60,045 level pretty spot on. Is this the calm before the storm?”

Traders’ sentiment about Bitcoin is mixed

According to the pseudonymous trader known as Byzantine General, the Bitcoin futures market is becoming extremely overheated.

The derivatives market is surging while the BTC futures funding rate is consistently spiking above 0.12%.

On average, the default futures funding rate of Bitcoin is 0.01%, so the market is overheated by around 12-fold. The trader said:

“This looks pretty bad tbh. A good flush would be a blessing.”

A trader known as NekoZ stated that the technical market structure of Bitcoin on the 4-hour chart indicates that BTC could consolidate longer, but he is not bearish in the near term.

“BTC - H4. I see no reason to be bearish on bitcoin. 2 points I am adding to my long. As long as we keep showing higher lows, 0 reason to be worried.”

Traders generally echo the sentiment that Bitcoin could see a minor pullback to reset from the overheating derivatives market, but the macro technical structure remains optimistic.