Bitcoin (BTC) touched $44,000 a second time on Jan. 12 amid increasing divergence of opinion about whether the price bottom is “in.” 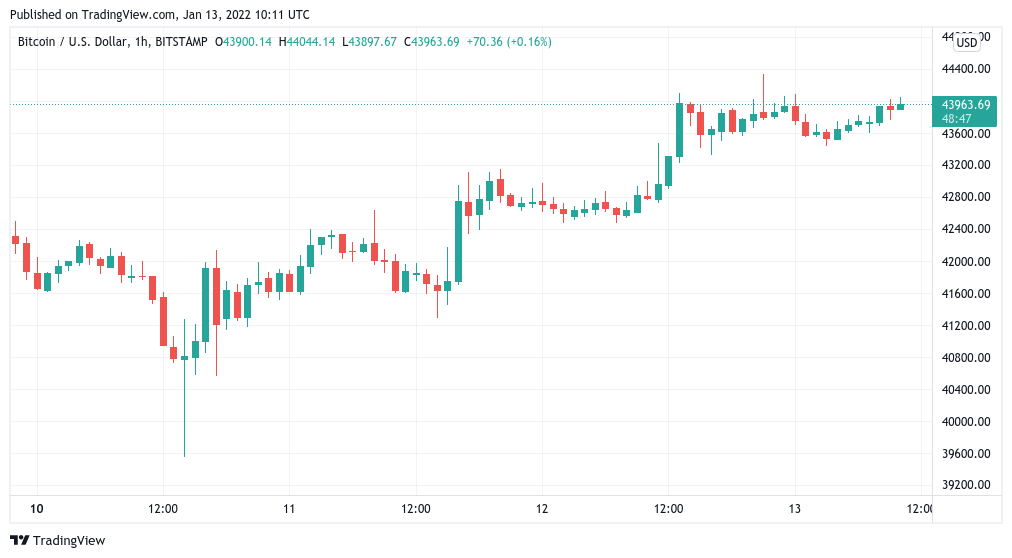 Bitcoin stayed broadly higher overnight following the previous day’s United States inflation data, but for some, now was not the time to become overly confident.

“BTC starting to feel a little toppy (local), although asks are diffused through some key resistance levels,” Twitter account Material Indicators commented as part of a recent update.

Suggesting a good opportunity to “de-risk,” Material Indicators highlighted order book flux, which, on Wednesday, had formed the focus of a graver warning about a possible incoming crash.

By contrast, others believed that a price “squeeze” may ultimately be to the upside and punish latecomer short traders.

Having uploaded a predictive chart snapshot, he argued that should BTC/USD grind higher on the day, the stage would be set for a higher low construction as part of a more solid recovery.

How long can the relief last?

A brief look at funding rates across exchanges revealed only a slight change overnight, with neutral to negative values dominating.

Such behavior runs in contrast to recent weeks, in which a declining spot price was met by positive funding.

At the time of writing, BTC/USD continued to attempt a breakout of the $44,000 zone, buyers preventing each drawdown.