Bitcoin price, Ethereum and other cryptocurrencies are on the backfoot this morning, with European traders already caught unawares by the speed of the reversal during the ASIA PAC season. Expect to see elevated selling pressure throughout the day as most EU and US traders will want to roll back their loss-making longs. This will only add to more bearish pressure in cryptocurrencies and trigger a dip back to lower levels from the beginning of the week, returning everything back to square one for this week.

Bitcoin price: Bulls see their efforts pared back as more pain is yet to come in the US session

Bitcoin (BTC) price will see investors nervous as a lot of money was poured into BTC longs yesterday throughout several trading sessions spanning from Asia to the closing bell in the US. But Bitcoin price action got tripped overnight as the ASIA PAC session took over again. Asian investors who were first-in to take on longs were waking up with very nice gains up almost 10% from their entry levels, which triggered full profit-taking as Russia declined to comment on Ukrainian efforts to compromise.

BTC price looks to be set to fall back towards $38,073, which was the entry-level during the Asian trading session yesterday. As European and American investors start their trading day they will see a dislocation in their positions, so expect to see a further wave of selling  pressure coming in, resulting in a break below $38,073, towards $36,709. With that, the double bottom from Tuesday at $37,200 will be taken out and the tone will be set for BTC price to close in negative territory for the trading week. 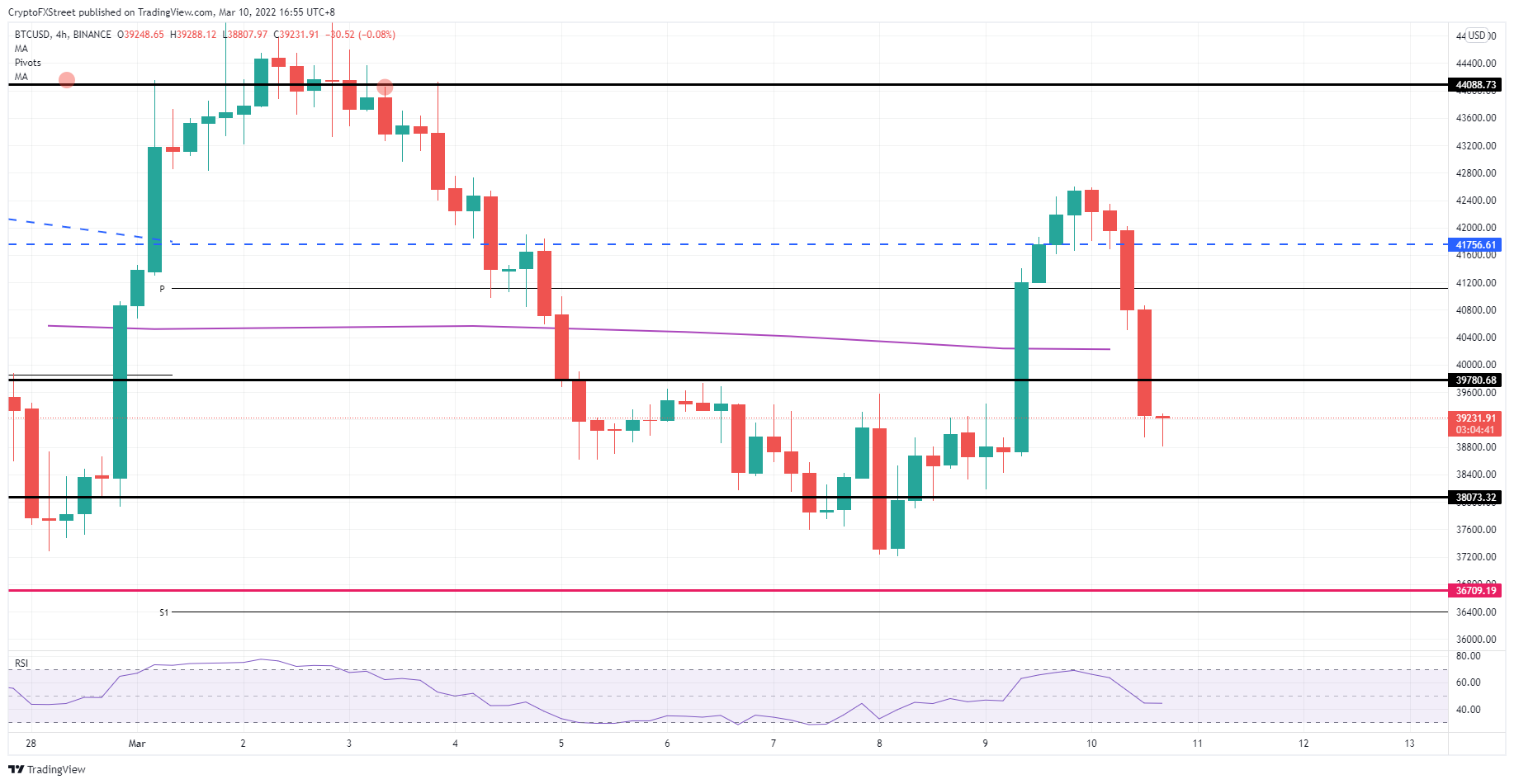 On the other hand, a positive headline could come from Russia, with Putin extending his hand to Ukraine and accepting their offer with troops starting to retreat out of Ukraine. Expect to see a whipsaw move back to the upside targeting $42,185, the double top from yesterday evening. Depending on the officialty of the source or comment, expect to see a follow-through towards $44,088.

Ethereum price bounces off support, but bearish pressure is there as investors await comments from Russia

Ethereum (ETH) price erased the acquired gains from yesterday as Asian traders sparked a sell-off this morning. This gave their European counterparts not the best start to the day and came as a surprise as yesterday global sentiment was looking forward to a positive outlook. At the moment of writing, price action has found a floor at $2,574 with a perfect technical bounce off that level, now possible. It is no coincidence that level coincides with the low of March 05 reached during the Asian session.

ETH price looks set to range trade a bit and perhaps even pop back up towards $2,682. This could be a level bears will want to defend as a logical entry point, putting their stop losses above $2,695 or even $2,700, providing a double hill to hide their stops behind from being hit intraday. As the Relative Strength Index has made a massive move back to the middle of the range, expect to possibly see bears still in the driving seat and a squeeze against $2,574, with lower highs and price bouncing off the aforementioned price level several times before breaking lower – maybe after the third or fourth bounce. That will open up the room for an accelerated drop towards $2,440, testing the low of this week. 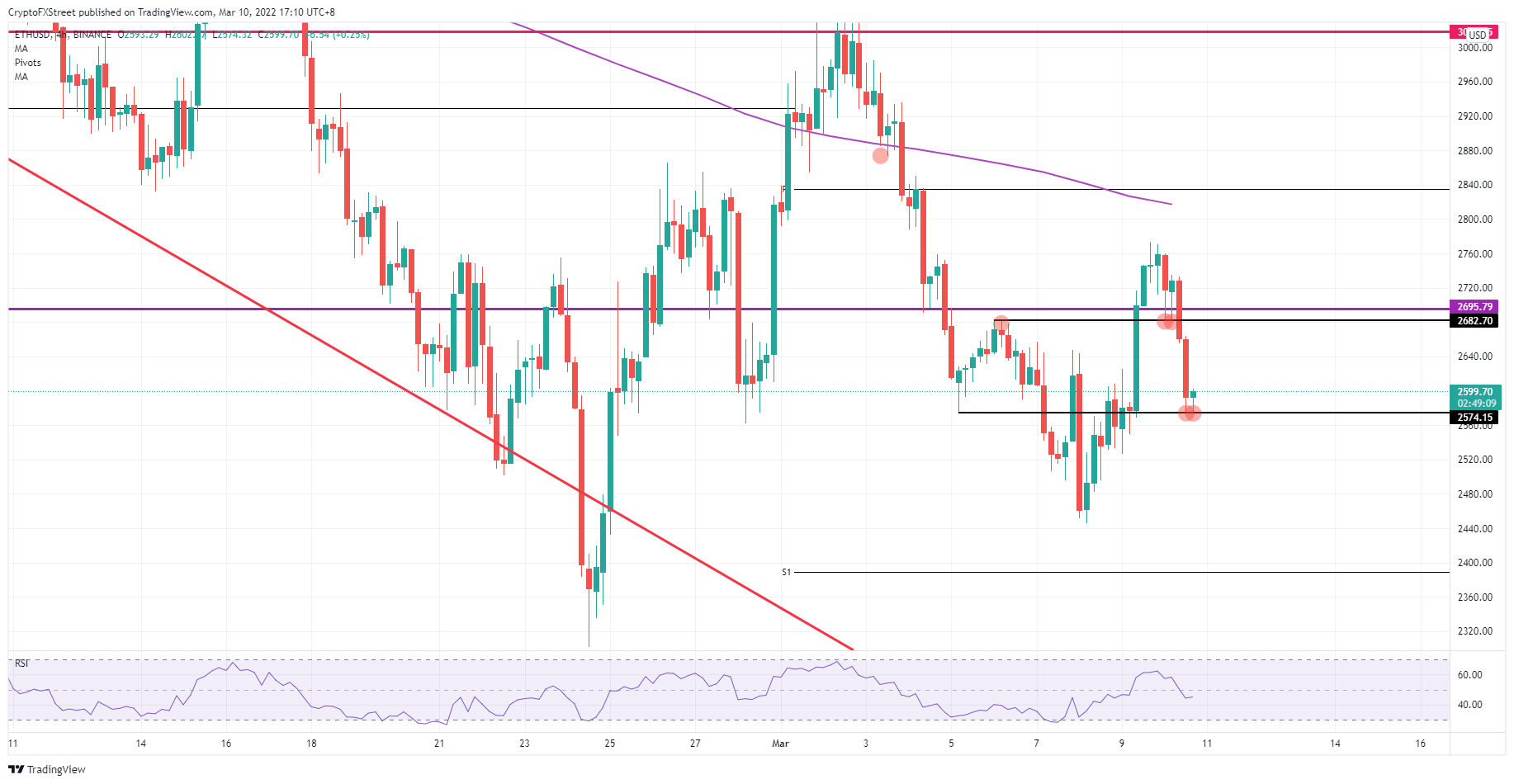 In a range-trading scenario, should bulls be able to trigger the stops of bears above $2,695, expect to see a quick rally higher in a short-covering rally, as those stops will activate quite a lot of buy-orders, ramping up the price action. That would bring ETH price action quickly to $2,760 and could even see some follow-through towards $2,800, where bulls face the 55-day Simple Moving Average (SMA). A small test and fade of $2,840 would be the maximum expected to the upside for today's session.

XRP price set to slip back below 55-day SMA, putting correction back on the table

Ripple's (XRP) price saw the hitherto absent buy-the-dip investors come back in strong yesterday as XRP saw a massive influx of cash as Ukraine extended an olive branch to Russia but saw no confirmation or positive signals out of Moscow, which did not welcome their efforts to continue the dialogue. After the relief rally yesterday, the silence is coming like a cold shower for investors, erasing the possibility of a quick resolution to the situation. It is becoming more apparent to the markets that Putin is only really keen on  squeezing out the situation in his favour.

XRP price has found a bit of a floor technically at $0.73. With two tests already to the downside, expect this level to break once the US session comes in and sees another wave of selling by investors. A punch through the floor at $0.73 would see a drop towards $0.70, making a new low for this week or even $0.69, a new low for this month. 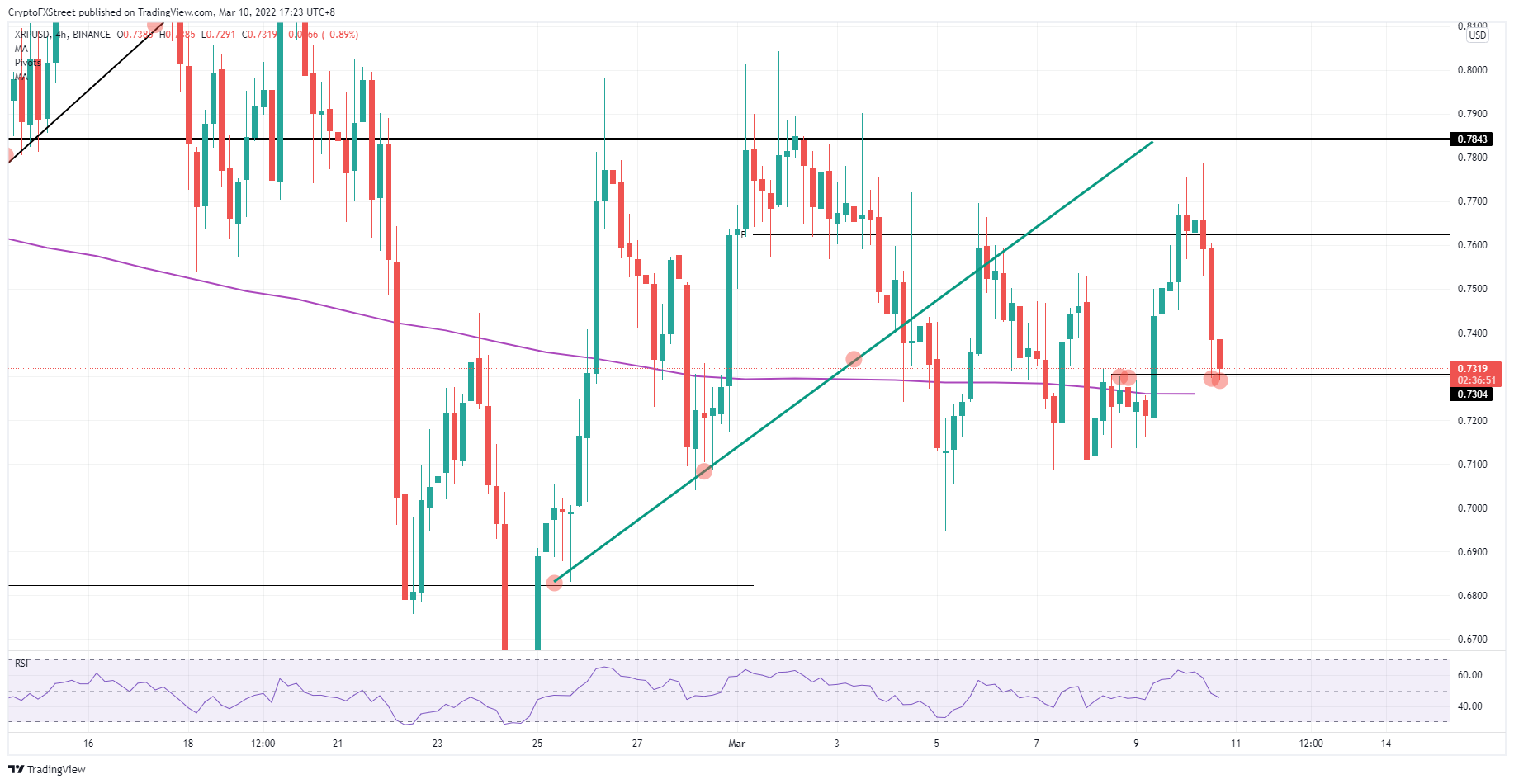 As sanctions start to hurt the Russian economy, and as the cut-off deadline for several Russian banks from SWIFT is nearby, they could start to weigh and force Putin's hand into a compromise, which would be well-received by global markets. In such a scenario, the relief rally from yesterday would appear only to be a rehearsal with the XRP price retracement back to $0.78 then punching through towards $0.80 or even $1.00, in the case of a permanent solution is found for the conflict.