The cryptocurrency market has taken a considerable step back from bullish activities observed last week. Tezos price is consolidating in the confines of an ascending parallel channel while awaiting a breakout. Traders will likely claim some sizeable gains if they time the impending breakout to $2.00 and later to $2.20.

Tezos price seems ready to head north to $2.00 and $2.20, respectively, but the 100-day Simple Moving Average (SMA) on the daily chart currently stands in the way. Its upside potential will remain intact if the channel’s through line holds. 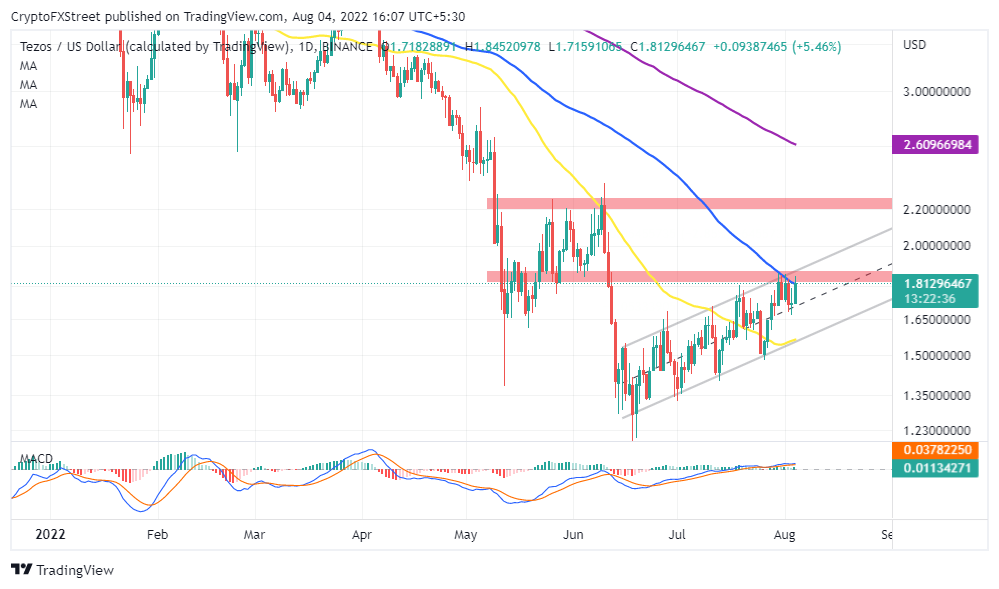 An analysis of the Moving Average Convergence Divergence (MACD) in the same timeframe shows buyers have the upper hand. It is worth remembering that the momentum behind Tezos price is bound to increase as the MACD lifts higher above the mean line.

The total Weighted Sentiment, an on-chain metric by Santiment, adds credibility to Tezos price’s bullish forecast. Theoretically, sharp dips below the mean line indicate high social volume coupled with an overall negative sentiment. Intriguingly, this metric is inversely related to the price. In other words, dips like the one seen in the chart below hint at an incoming bullish move.

Although Tezos price generally looks bullish, investors should consider booking profits at $2. On the downside, suffering rejection from the 100-day SMA means that XTZ may explore downhill levels to the 50-day SMA. If declines become too challenging to stop owing to the mundane trading in the larger cryptocurrency market, Tezos price could retest $1.35.

Chiliz price dangles above abyss, ready to plunge below $0.14

Chiliz (CHZ) price could not catch a break over the weekend as social unrest flared up in China, battering trader sentiment on Monday morning in the ASIA PAC session.

Ethereum (ETH) price saw a lackluster weekend regarding its price action and performance. On Saturday, some hopes were there that the pivotal level at $1,243 could get a test, but bulls never made it up that far.

Bitcoin price saw a sudden sell-off on November 28 after a consolidative weekend. This bearish outlook comes as major protests erupt in China due to Covid restrictions.

Binance Coin price could be running out of gas to continue its massive rally. While the last five days have been exciting for holders, the following days will need to be closely monitored.