Chainlink price is trying to find its feet in the wake of declines that followed its rejection from resistance at $8.40. Despite LINK’s ongoing retracement at $7.68, bulls have managed to sustain a generally up-trending market and Chainlink is up nearly 17.50% from its September low at $6.56.

Sergey Nazarov, the co-founder of Chainlink, revealed that the network is closer to launching support for staking, while speaking at the SmartCon 2022 conference. Users will, from December, start earning rewards for locking up tokens in the network. Besides being an avenue for investors and crypto enthusiasts to earn passively, staking helps secure the blockchain protocol and gives the users a sense of ownership.

Chainlink is also planning a couple more programs tailor-made to improve the economic viability of all the services offered by the platform. For example, SCALE, which will involve four other crypto projects (Metis, Moonbeam, Avalanche and Moonriver), is designed to reduce the costs of inputting oracle data and reports on-chain through the splitting of costs among a larger number of participants.

According to Nazarov, Chainlink is hoping to be the go-to platform for all services related to Web3. Through another program called BUILD, early-stage projects will tap seamless access to services and cutting-edge support.

“We are seeking to provide all the services that everyone needs to build Web3, and based on our market share we already do that very successfully,” reckoned Nazarov.

Chainlink price sits on top of a rising channel’s lower boundary support. The 50-day SMA (Simple Moving Average – red) caps movement to the upside, while the 100-day SMA (blue) could be contingency support if LINK price breaks below the channel.

The Stochastic oscillator’s position below 30.00 shows that Chainlink price is oversold. If investors continue to take advantage of the lower market price, LINK could gain momentum and rise to the previous high at $8.40. 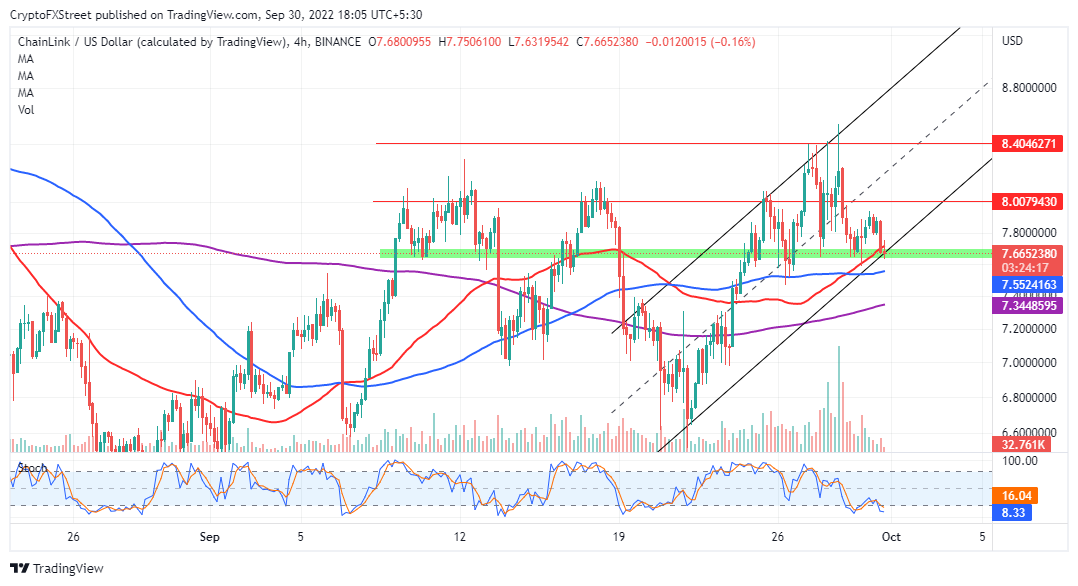 Investors holding 10,000 and 100,000 tokens are, according to on-chain data from Santiment, on a buying spree. Over the last six months, these cohort’s addresses increased to 2,998 from 2,511 in April. Investors with between 1 million and 10 million tokens have grown to 78 from 11 in the same period, inferring that sentiment toward the oracle token remained positive despite the price correction.

Buyers are expected to prevent Chainlink price from sliding below $7.00. If anything, support at the channel’s lower boundary and the 100-day SMA could come in early and handy for an immediate northbound move. However, the uptrend will only be sustainable if LINK collects enough liquidity as investors fill their bags.