The United States Securities & Exchange Commission (SEC) has posted a tweet about weighing the risks and benefits of investing in a fund that holds Bitcoin futures. The post sparked speculation within the cryptocurrency community that the securities regulator may approve a Bitcoin exchange-traded fund (ETF).

The US SEC’s Office of Investor Education and Advocacy wrote in a tweet and informed investors that they should “weigh the potential risks and benefits” before investing in a fund that holds Bitcoin futures contracts.

The tweet refers to an investor bulletin that was published by the office in June, telling investors to examine the potential risks involved with investing in BTC futures through funds.

The crypto community started to speculate that the SEC will soon approve a Bitcoin futures ETF. In addition, the regulator is facing many deadlines this month for the Bitcoin ETF proposals various companies put forward earlier this year.

Eric Balchunas, a senior ETF analyst at Bloomberg, commented that the SEC tweet was a “good sign” and that the odds of the regulator approving a Bitcoin ETF is now at 85%.

He added that Valkyrie recently updated their Bitcoin futures ETF prospectus, suggesting that the US is inching closer to a BTC ETF being approved as companies only update their prospectus when their ETFs are almost ready for launch.

Bitcoin price has been able to rally off of increasing positive sentiment, as it continues to form an ascending parallel channel on the 4-hour chart. BTC may need to test the strength of its foothold prior to extending gains.

Bitcoin price may find immediate support at the 20 four-hour Simple Moving Average (SMA) at $56,785, coinciding with the middle boundary of the prevailing chart pattern. Additional lines of defense may emerge at the 50 four-hour SMA at $55,773.

Further selling pressure may see BTC fall toward the lower boundary of the technical pattern at $54,580, corresponding to the 78.6% Fibonacci retracement level. Failure to hold above this level may spell trouble for the bulls, but a line of defense may appear at the support line given by the Momentum Reversal Indicator (MRI) at $54,099. 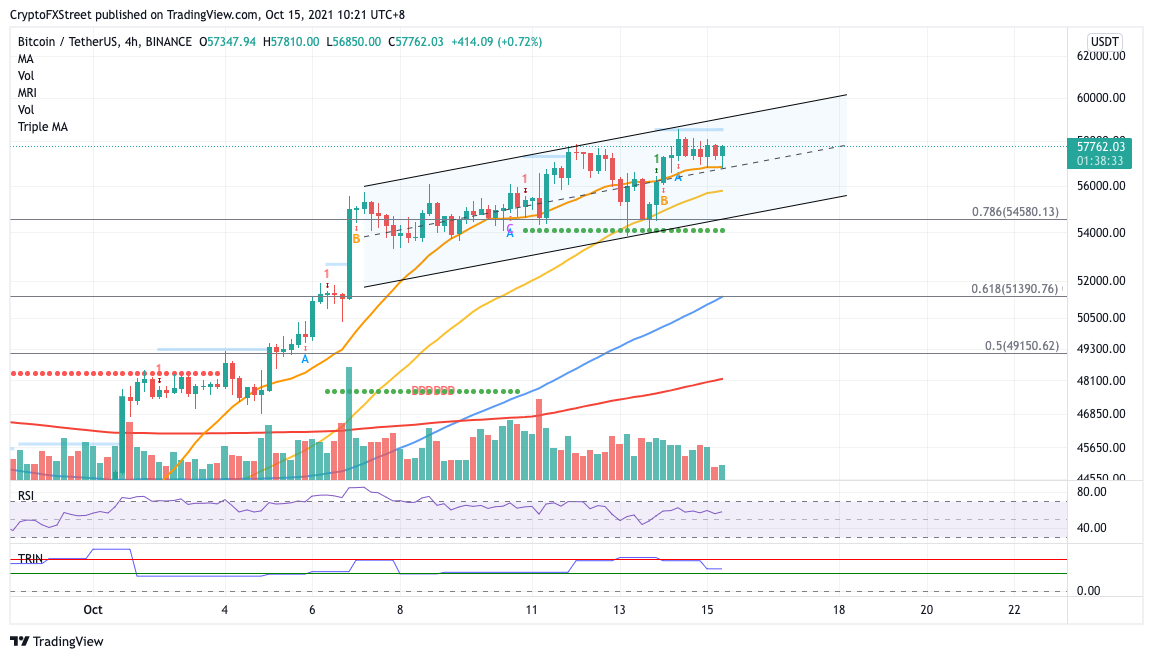 Should the bulls continue to take control of the market, Bitcoin price will need to secure $56,785 as a foothold before moving higher, tagging the topside trend line of the parallel channel, targeting $60,000 next.