The United States Securities & Exchange Commission (SEC) v. Ripple case takes a turn as the judge has denied the blockchain firm access to view the agency employees’ trading history. The fintech firm initially filed the request on August 27, aiming to expose the regulator’s lack of clarity on XRP.

The $1.3 billion lawsuit filed by the SEC against Ripple Labs continues as the securities regulator scores a small victory. The US magistrate judge has denied the blockchain firm’s request for documents that would show whether the agency employees have executed transactions in Bitcoin, Ether or XRP.

While the court has previously ruled for the SEC to present its trading policies related to cryptocurrencies, Ripple’s lawyers argued when the firm met with the regulator’s counsel in August that the agency’s employees were prohibited from trading XRP after the investigation started in 2019.

Ripple further stated that the SEC has not produced any documents that would back up their claim. In addition, agency employees’ trading decisions would “expose the lack of clarity” on XRP’s status of whether the regulator views the cryptocurrency as a security, Ripple said.

Judge Sarah Netburn stated that according to her analysis, the aforementioned does not seem to be pertinent to this case. She added that individual trading decisions do not add weight to the issues on the case.

The other key argument for the denial of the motion was the lack of legal justification to approve the demands from the blockchain firm. The federal rule would protect the privacy rights of SEC employees as citizens of the United States.

Despite the SEC’s small victory on the recent ruling, Judge Netburn’s motion highlighted that the regulator should provide Ripple with documentation that confirms that it has advised its employees to refrain from trading XRP in 2019.

Ripple has reiterated that it has no plans to settle with the SEC at any time. The firm is confident that they can show the agency’s head, Gary Gensler, that pursuing the case is “picking winners and losers” in the crypto industry.

XRP price has nearly reached its bearish target given by the prevailing symmetrical triangle pattern on the 4-hour chart. The 27.2% Fibonacci retracement level has acted as strong support for Ripple, but selling pressure could see the token fall further toward $0.78.

Ripple bulls have struggled to lift prices higher against the overwhelming distribution of the sellers. As a result, XRP price plunged 20% from the apex of the governing technical pattern, nearly reaching the 26% pessimistic target.

The 27.2% Fibonacci retracement level has enabled Ripple to keep its head above water as it attempts to recover. However, its recuperation may be cut short as there are countless obstacles ahead. 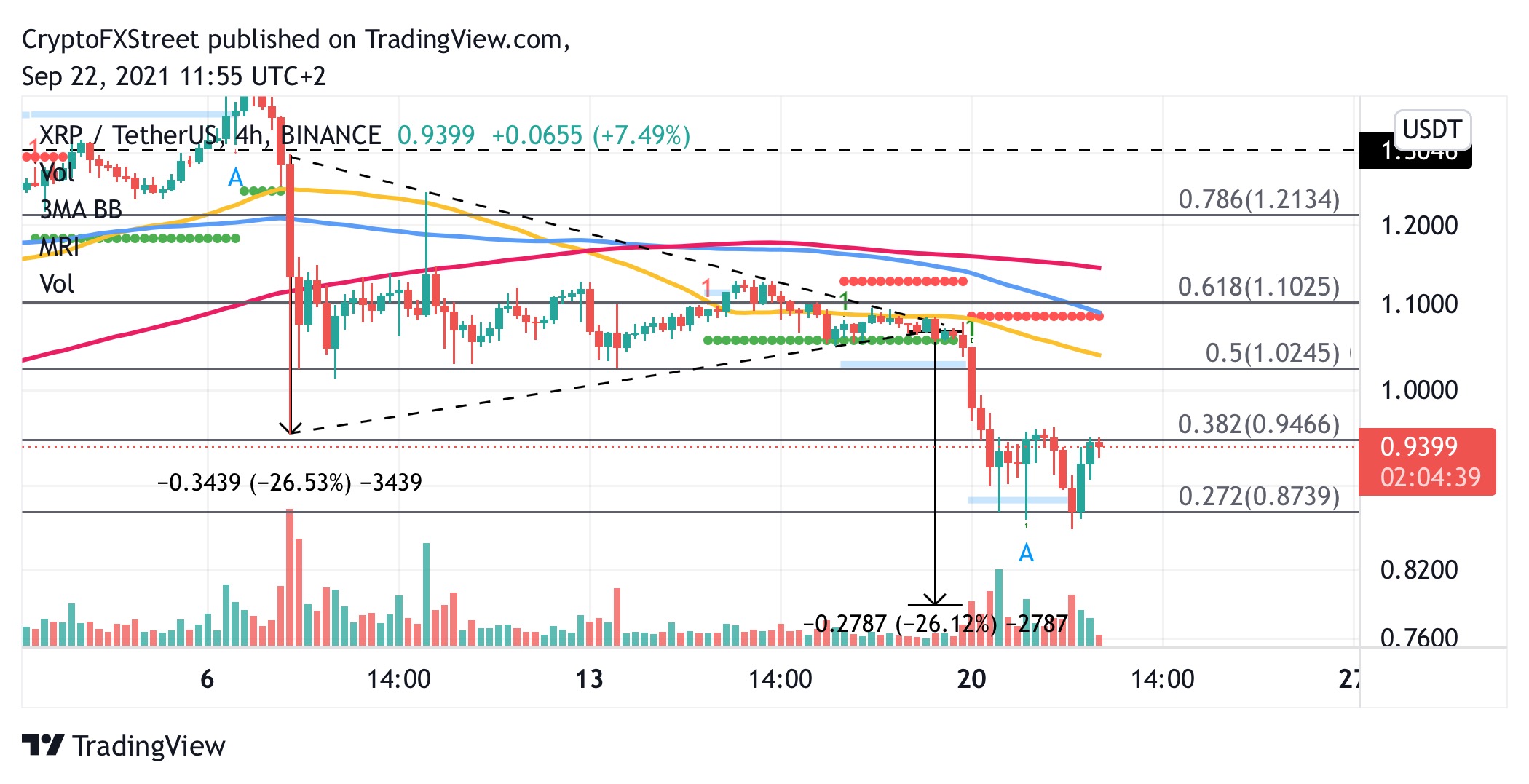 Should XRP price witness a spike in sell orders, the token may eventually reach the target given by the technical pattern on the downside at $0.78.