The Federal Reserve of New York kicked off its digital dollar pilot alongside major lenders Citi, Bank of America, BNY Mellon, HSBC and payment specialists Mastercard and Swift. The goal of this project, titled “The Regulated Liability Network” (RLN) is to experiment with wholesale digital asset transactions and settlements.

The usage of digital dollar tokens by banks could speed up settlements and bring blockchain innovation to the real economy.

While the crypto market is on shaky ground after FTX exchange’s collapse, leading credit ratings provider, Fitch Ratings said that the stablecoin market has stabilized.

Leading global banks and payment giants kicked off a 12-week digital dollar pilot together with the Federal Reserve of New York. The project titled “The Regulated Liability Network” will serve as a ground for participants to experiment with wholesale digital asset transactions and settlements.

Major lenders Citi, Bank of America, BNY Mellon, HSBC and payment specialists Mastercard and Swift will use simulated data to test tokenized deposits and transactions by banks. The Federal Reserve of New York issued a statement,

The Regulated Liability Network consisting of leading global banks, payment giants and the New York Fed is working on the establishment of new digital forms of money. RLN represents a potential alternative to unregulated cryptocurrencies like Bitcoin, Ethereum and altcoins.

RLN can be considered an alternative to Central Bank Digital Currencies (CBDCs) and commercial and electronic money issued by regulated non-bank payment firms. The premise is that digital dollar, CBDCs and tokens issued by payment firms could exist on the same distributed ledger.

The digital dollar pilot is aimed at using interoperable blockchains for near-instant cross-border payments and clearing. On November 10, the New York Fed announced a joint experiment with the Monetary Authority of Singapore to test how wholesale CBDCs could streamline cross-border payments involving multiple currencies.

The news of the digital dollar pilot followed the collapse of FTX exchange and bloodbath in unregulated cryptocurrencies like Bitcoin, Ethereum and altcoins.

Michelle Neal, head of New York Fed’s markets group said that the use of the central bank digital dollar could speed up settlement time in currency markets and is promising.

While the US Fed’s New York arm begins testing the digital dollar, stablecoins have stabilized and recovered from the FTX-induced crypto crash.

Fitch Ratings announces belief in stablecoins has been reinstated

During the FTX-collapse, the crypto market witnessed a spike in volatility and a bloodbath. Stablecoins USD Tether (USDT) and Tron ecosystem’s USDD suffered a temporary depeg. The stablecoins re-established their peg and recovered from the loss of investor confidence.

Fitch Ratings, a leading credit ratings provider, noted that stablecoins have stabilized again. Investor confidence is returning to larger stablecoins as Tether and Circle, the issuers of USDT and USDC have made concerted efforts to increase confidence and improve price stability.

Fitch Ratings said in a report that USDT and USDC have increased the proportion of liquid assets backing the stablecoins, although excess risk remains. Tether reduced USDT's commercial paper holdings, now at zero according to the firm. In its portfolio, Tether still holds more volatile and potentially less liquid assets, such as precious metals, the report said.

USDT's consolidated assets exceed its liabilities by 0.3%, which may not cover volatile swings in values of some underlying assets if USDT has to liquidate assets.

Circle issued USDC holds a high level of cash through US deposits (20%) and short-duration US Treasuries (80%). The following chart compares the adjusted on-chain volume of stablecoins. 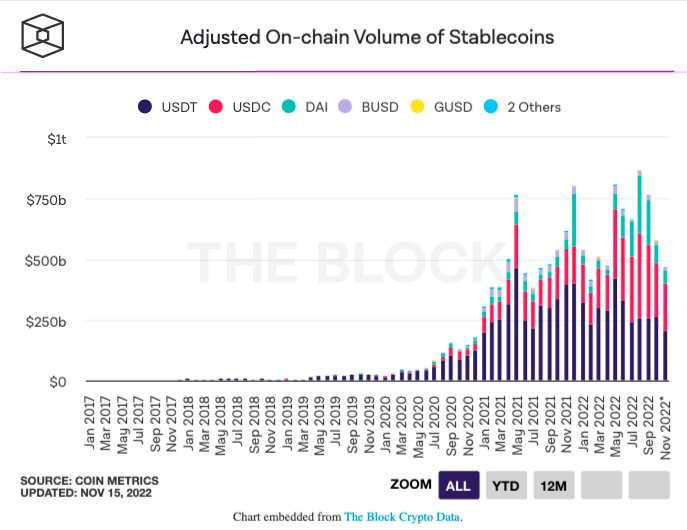 Stablecoins have been showing signs of increased stability, USDT briefly traded below its peg to the US dollar last Thursday. The rating agency said that the number of new stablecoins has increased to 132, a 76% increase from Q1 2022, despite the FTX-collapse.

Fitch Ratings believes that the entry of new stablecoins could result in additional issues and failures of smaller projects. The digital dollar pilot therefore, comes at the right time for entities to reduce settlement times and increase transaction speed using regulated digital assets.