SHIB’s 400% rally brings attention back to dog-themed meme tokens and it could be a sign that DOGE is on the verge of an equal-sized breakout.

Meme coins were some of the earliest breakout stars at the start of this year's bull run and big-name influencers like Elon Musk and Mark Cuban helped to stoke a surge in the price of Dogecoin (DOGE). The success of DOGE eventually spawned th massive litter of dog-themed offshoots that now populate the meme coin pack.

This week the pack is once again on the run after Shiba Inu (SHIB) saw a triple-digit breakout and DOGE looks ready to move higher. Bitcoin's (BTC) sudden move above the $55,000 level appears to have kickstarted the move, and even as the price moves lower to test underlying support, meme-tokens are still flashing bullish signals.

Aside from Bitcoin's recent breakout and protocol-specific announcements, the rally in meme coins seems to have been kicked off after Elon Musk tweeted a picture of a Shiba Inu puppy.

The surge in price of SHIB comes as the ecosystem behind the token has expanded to include the ShibaSwap exchange, which claims to offer lower exchange fees than Uniswap and multiple ways for token holders to earn a yield through providing liquidity or staking.

SHIB also benefits from being one of the few meme tokens listed on multiple large cryptocurrency exchanges, including Coinbase and Binance, which provides ample liquidity and trading volume for traders interested in SHIB.

The Shiba Inu community has also been showing an increasing interest in the upcoming launch of the protocol’s Shiboshi NFT.

Dogecoin prepares for a breakout

SHIB may have notched the largest percentage gain, but DOGE remains the top dog of the pack with the furthest reach and a market cap of $33.26 billion.

VORTECS™ data from Cointelegraph Markets Pro began to detect a bullish outlook for DOGE on Oct. 1, prior to the recent price rise. 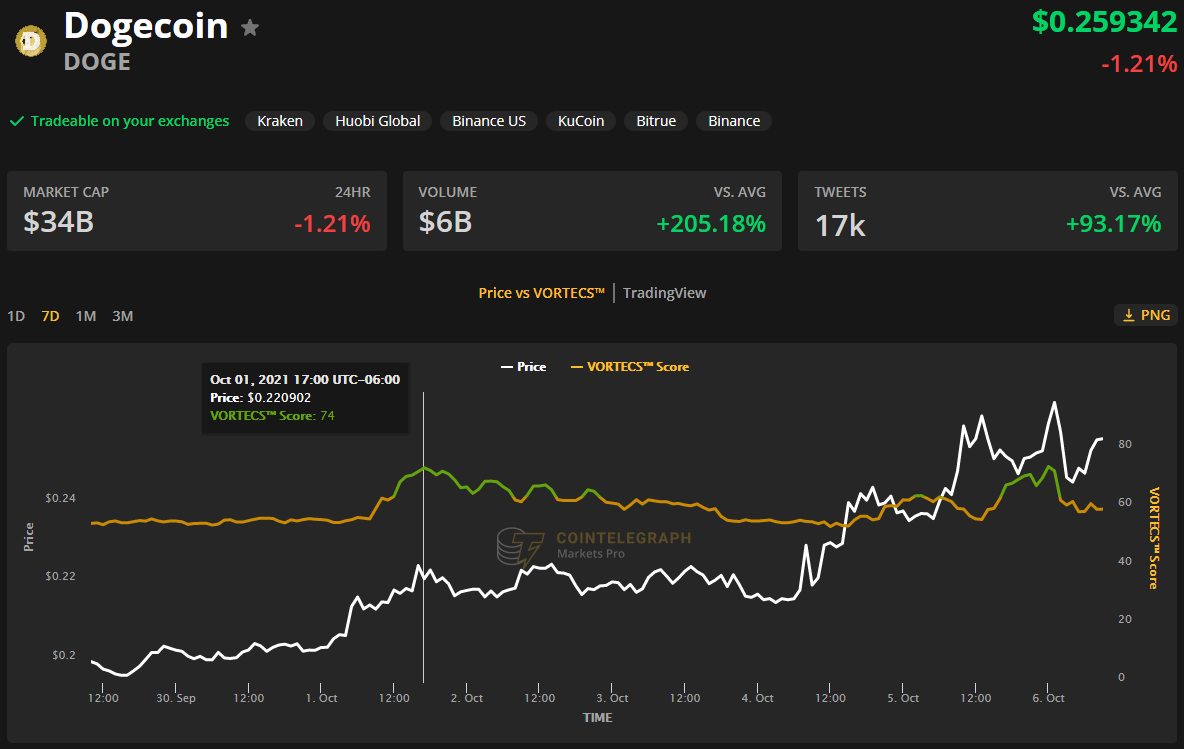 As seen in the chart above, the VORTECS™ Score for DOGE climbed into the green zone and hit a high of 74 on Oct. 1, around 61 hours before the price increased by 26.7% over the next two days.