SEC vs. Ripple battle rages on

After months of deliberation and jabs, XRP seems to be coming on top with the SEC vs. Ripple lawsuit. Ripple is now planning to use the famous William Hinaman speech and the pertaining documents against the SEC.

In 2018 William Hinman, the Former Director of SEC, gave a speech where he detailed his views on Bitcoin and Ethereum, noting these digital assets were not securities. For the said speech, Hinman consulted the SEC on their opinions and had multiple discussions, which the Ripple lawyers are after.

Although multiple motions have gone in favor of the defendants, the prosecution is defending their stance, denying Ripple the discussion documents.

On May 13, Ripple lawyers filed a motion to compel after the American financial watchdog mentioned that the documents are protected under the attorney-client privileges. The defendants argue that Hinman gave the speech in a personal capacity and further added,

He sought input from SEC colleagues as to how best to package his remarks. That certain colleagues discussed legal concepts in some of their responses  does not imbue them (or the other communications) with any attorney-client privilege to which the court rejected the SEC’s claims of it being “privilege protected.”

Despite multiple failed attempts and court orders, the SEC has double-backed on its “attorney-client privilege” argument. The May 18 response from the regulators argued that Hinman’s speech were nothing but “personal opinions.”

Even if it contains personal views, Director Hinman did not give the Speech in his personal capacity—the Speech would bear no relevance to Defendants’ defenses if it had not been given by a senior SEC employee.

Although Ripple is seemingly at an advantage, if the court rules in favor of Ripple and orders the SEC to produce the disucssion documents or emails, it woud be a major win for the defendants. As a result, XRP price could also see an uptick in buying pressure followed by a quick run-up.

XRP price in a dilemma

XRP price has been on a massive downtrend since its local top at $1.96 in April 2021. So far, the remittance token has crashed 80% and has recovered to $0.40, where it currently trades. The result of the recent downswing was a flip of the $0.52 and $0.69 support levels into resistance barriers.

This bearish development could be a threat if bulls take control and try to recover the losses. Interestingly, the Ripple price action between December 26, 2020, and May 10, 2022, set up two higher lows.

In the same period, the Relative Strength Index (RSI) created lower lows, denoting a technical formation known as hidden bullish divergence. This setup forecasts an optimistic outlook for the asset. Therefore, investors can expect XRP price to stage a relief rally and retest the $0.52 hurdle, but in a highly bullish case, this move could extend to $0.69. 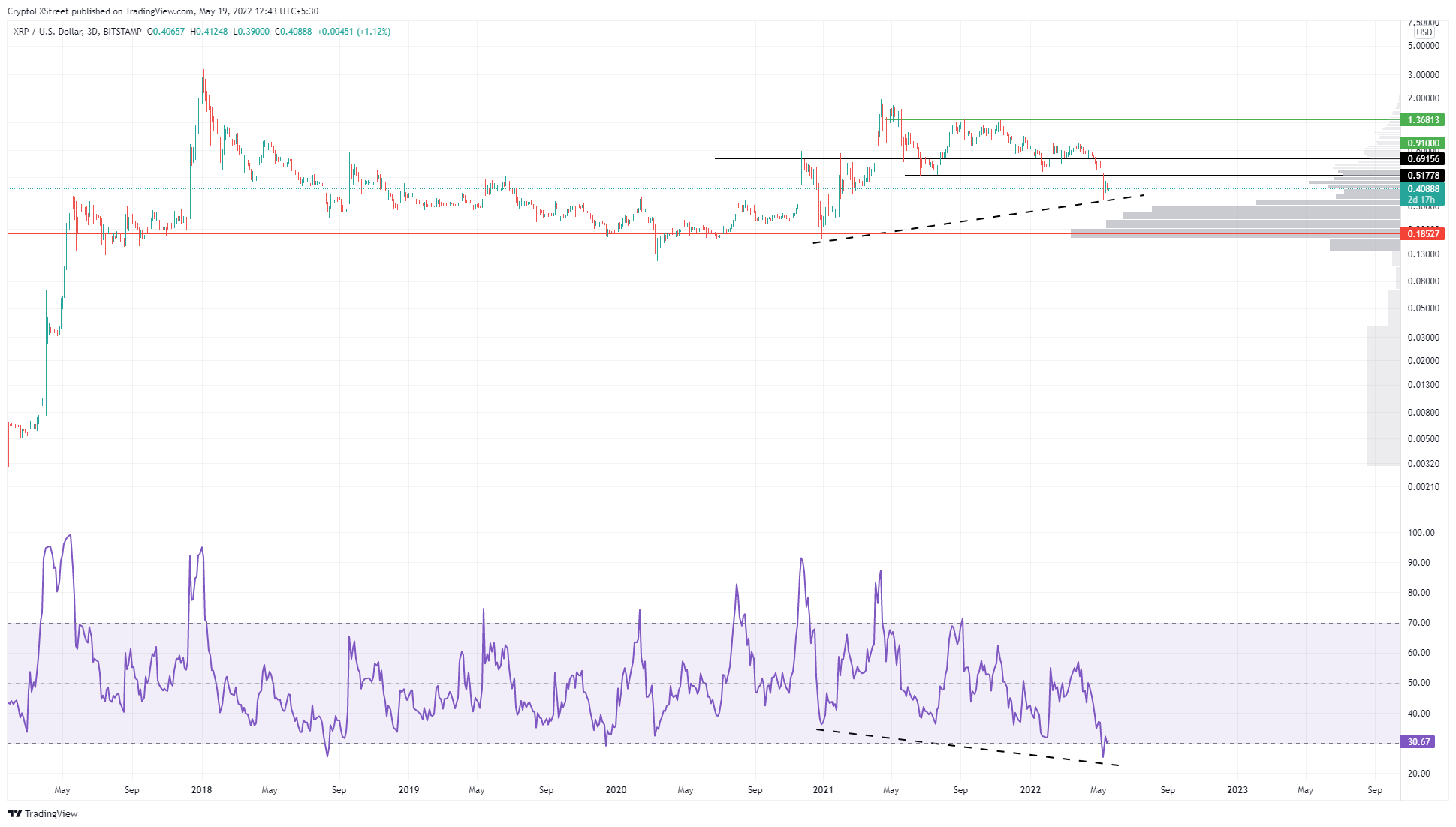 Supporting the short-term optimisitc outlook is the recent bullishness seen across Bitcoin’s price, which is hinting at a move to $31,000. From a short-to-mid-term outlook, this upswing could extend to $36,000, which could be a bull trap or a dead cat bounce.

Hence, the chances of XRP price following this trend are also higher. Regardless of where the remittance token forms its local top, a crash in the big crypto will trigger altcoins, including Ripple, to follow suit.

In such a case, XRP price could shatter the immediate support levels and revisit the highest volume traded point since 2017 aka point of control at $0.19. This move, in total, would represent a 64% crash from $0.52.

For bag-holding investors, the run-up to $0.52 before the brutal crash is a place to potentially offload some of their XRP tokens.

Regardless of the bearish technicals, Ripple continues to make headway with its partnerships. The payments company announced a collaboration with the Lithuanian online international money transfer provider - FINCI.

The move is significant due to two reasons - FINCI is the first Lithuanian partner and XRP will be used to facilitate transfers.

The recent tie-up builds on the Ripple’s already vast On-Demand Liquidity (ODL) customer base, which leverages the wildly controversial token XRP for transfering funds across borders. FINCI will be able to make business to business (B2B) payments between Europe and Mexico.

The CEO of FINCI, Mihails Kuznecovs detailed his thoughts on this collaboration,

What’s more, the savings and operational improvements we’ll achieve by using Ripple’s ODL will allow us to put money back into the business and enhance our offering to our customers

Despite the regulatory pressure in defending XRP from the SEC’s judgement, Ripple continues to make headway with its partnerships. So, investors need to understand that the bearish outlook is based solely on assumption of a dead cat bounce.

If Bitcoin price produces a macro higher high at $52,000, altcoins will likely follow suit due to the high correlation coefficient in the cryptocurrency market. In such case, a three-day candlestick close above $0.91, will create a higher high for XRP price on a high time frame and invalidate the bearish thesis.

This development could trigger bullish momentum from sidelined buyers and propel XRP price to the next hurdle at $1.36.