Goldman Sachs, one of the world’s largest investment banks, is ready to spend millions of dollars to scoop up crypto firms whose valuations have been hit. The recent collapse of Samuel Bankman-Fried’s FTX exchange resulted in a shakeout in crypto, Goldman Sachs’ executives believe cryptocurrency firms are now more “sensibly priced.”

FTX exchange owes $3.1 billion to its creditors according to its bankruptcy filing. Goldman Sachs identified this as an opportunity to increase their crypto stake amid deep discounts from the FTX collapse-induced crash.

FTX's implosion has heightened the need for more trustworthy, regulated cryptocurrency players, and big banks see an opportunity to pick up business. We do see some really interesting opportunities, priced much more sensibly.

Reuters reported that the American multinational banking giant could potentially invest millions in its purchase of crypto firms. The amount that Goldman may potentially invest is not large for the Wall Street giant, which earned $21.6 billion last year.

The American banking giant’s interest in crypto firms hit by cryptocurrency’s collapse is bullish for crypto. David Solomon, CEO of Goldman Sachs spoke to CNBC as the FTX collapse unfolded. Solomon said that he views cryptocurrencies as "highly speculative" and sees much potential in the underlying technology as its infrastructure becomes more formalized.

Goldman Sachs’ rivals Morgan Stanlet and HSBC believe crypto has no intrinsic value and have no plans to expand into crypto trading or investing for retail customers. In contrast to industry-wide opinion, Goldman has invested in 11 digital asset companies that provide services such as compliance, cryptocurrency data and blockchain management.

McDermott’s team has grown to more than 70 people, including a seven-strong crypto options and derivatives trading desk. Goldman Sachs recently joined hands with MSCI and Coin Metrics and launched data service datonomy, a project aimed at classifying digital assets based on how they are used.

What's increased is the number of financial institutions wanting to trade with us. I suspect a number of them traded with FTX, but I can't say that with cast iron certainty.

With initiatives from American banking giants like Goldman Sachs, institutions can access cryptocurrencies through regulated counterparties and increase inflow of smart money to risk assets like Bitcoin.

These signals observed in November 2022 were seen in July 2022 during the $41 billion collapse of the Terra LUNA sister tokens and March 2020 crypto crash induced by COVID-19.

Bitcoin’s realized price is a stable view of BTC growth and capital inflows. Realized market capitalization is the average cost basis of the network which tracks the latest price where each UTXO moved last.

The realized market capitalization is now down 17.33%, significantly higher than 2015 and 2018 cycles. 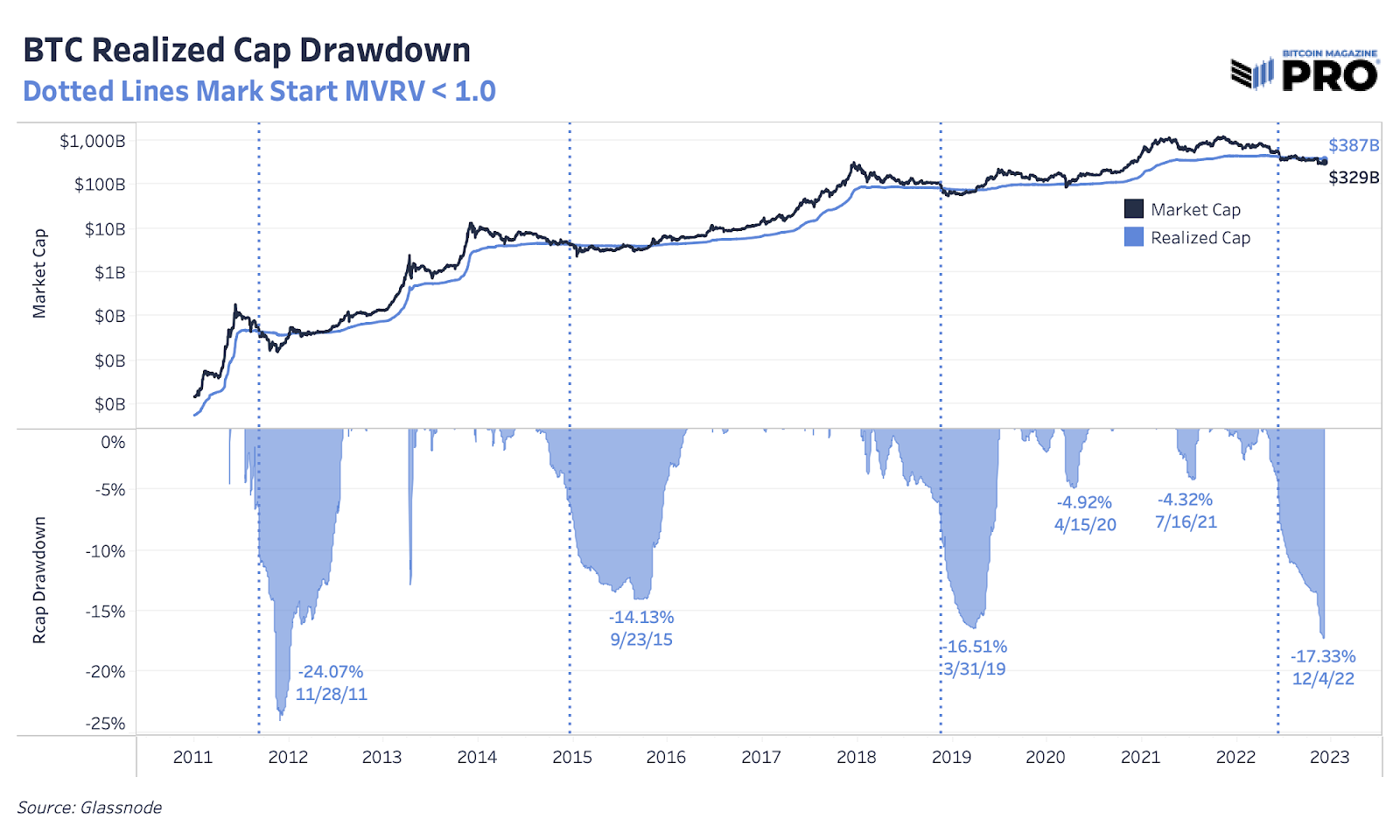 Pentosh1, crypto analyst on Twitter believes Bitcoin price has upside potential. BTC hit $17,400, the analyst has set $17,500 as the next target for Bitcoin. 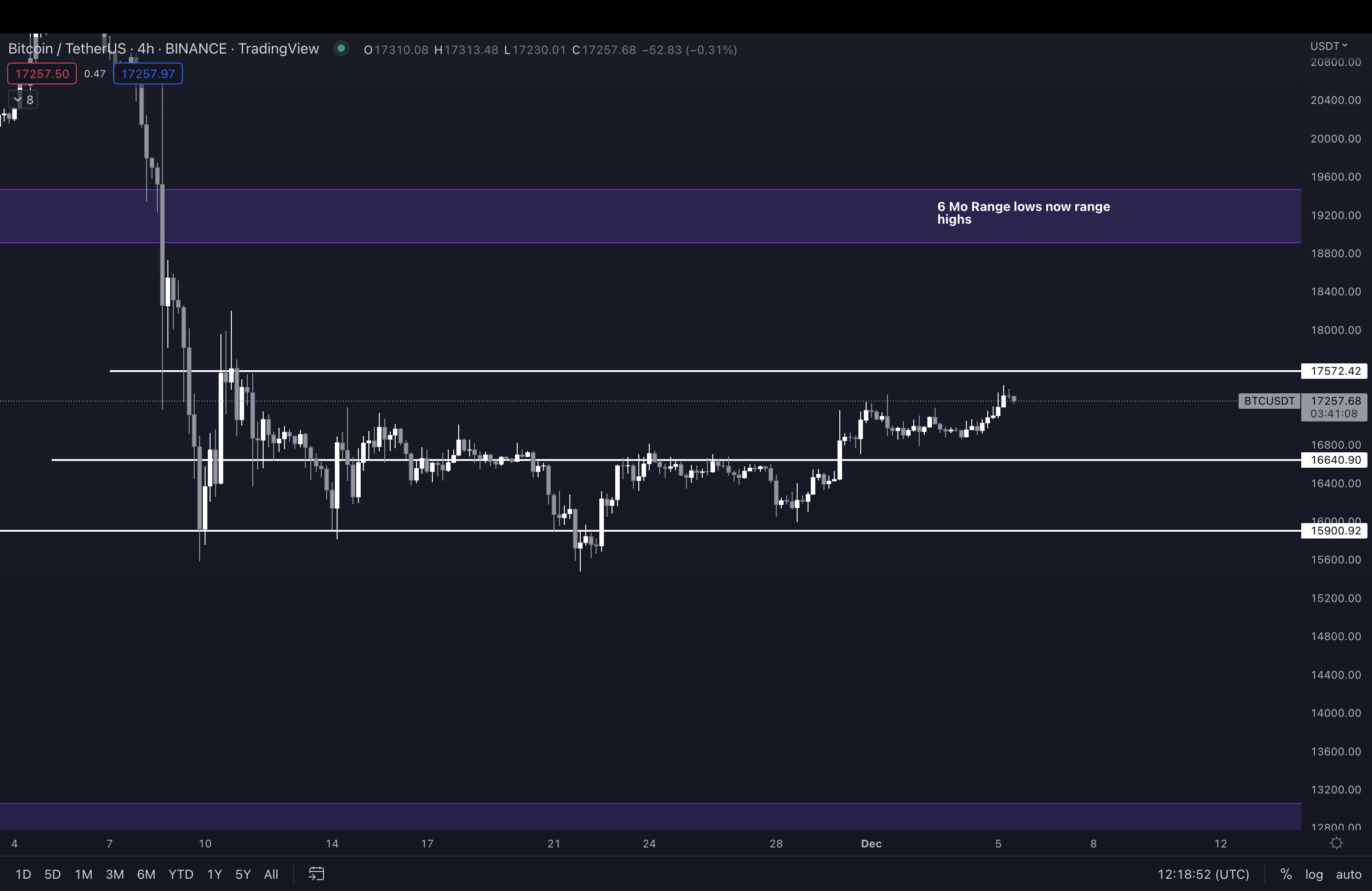