While El Salvador’s move to make Bitcoin as legal tender in the country has attracted mass amounts of attention, concerns also arose. Fitch Ratings has also joined the International Monetary Fund (IMF) in raising concerns over possible consequences of the new legislation.

The President of El Salvador Nayib Bukele made the announcement that the country would be adopting the leading cryptocurrency as legal tender recently, marking a watershed moment for the new asset class.

However, protests, lawsuits and criticism followed after the decision was made, including El Salvador’s opposition party that sued the government over the new legislation.

Fitch Ratings suggests that there could be negative consequences since it introduced Bitcoin as legal tender, highlighting the financial and insurance sector in particular. The new law would force these institutions to keep their BTC or sell their cryptocurrencies to avoid price risk.

Bitcoin is set to become legal tender in the country on September 7, and exchange-rate volatility remains a risk factor for the sovereign. Fitch believes that the process to adopt the leading digital asset is “unnecessarily rushed,” leaving financial firms little time to adapt.

The IMF also expressed concern regarding digital assets, stating that the new asset class could pose significant risks, and effective regulatory measures must be put in place when dealing with cryptocurrencies.

According to IMF spokesperson Gerry Rice, the adoption of Bitcoin could raise a number of macroeconomic issues. Bukele responded that he would try to explain that the move to make the bellwether cryptocurrency a legal tender would not change their macroeconomics.

Rating agency Moody’s Investors Service downgraded the Salvadoran government’s rating as it believes that there could be increased uncertainty regarding the potential fresh round of financing from the IMF after adopting Bitcoin as legal tender.

Moody’s view is that the financial outlook for El Salvador remains vulnerable and susceptible to financing shocks. Should the country see limited availability of funding alternatives, Moody’s added that the sovereign would continue to face liquidity pressures going forward.

Bitcoin price is witnessing a minor pullback as it retests a crucial line of support at the 200-day Simple Moving Average (SMA) on the daily chart.

Bitcoin price must close above the aforementioned support at $45,592 for BTC to have any chance of continuing its rally.

However, should selling pressure arise and if the leading cryptocurrency slices below this level, the 20-day SMA will emerge as the next line of defense at $43,430, before the 38.2% Fibonacci extension level at $42,635. 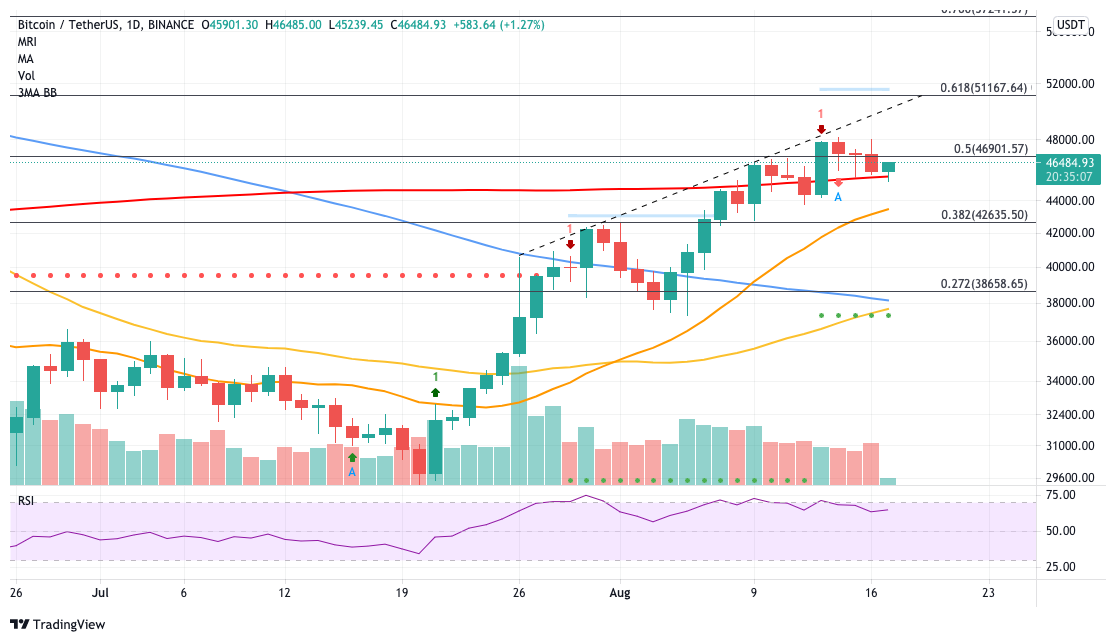 The next few days are crucial for investors to take note of as a slight move in either direction may paint a largely different picture for the outlook of BTC.