After closing the previous two days in the negative territory and losing more than $30 during that period, Ethereum turned north on Friday, November 20, and touched its highest level in 28 months at $511. As of writing, the smart contracts giant is up nearly 7% on an intraday basis.

Ethereum price may rise to $530

With this recent upsurge, ETH price moved into the upper half of an ascending channel coming from November 1. The resistance line of the channel is currently located near $530, which could be seen as the next target. 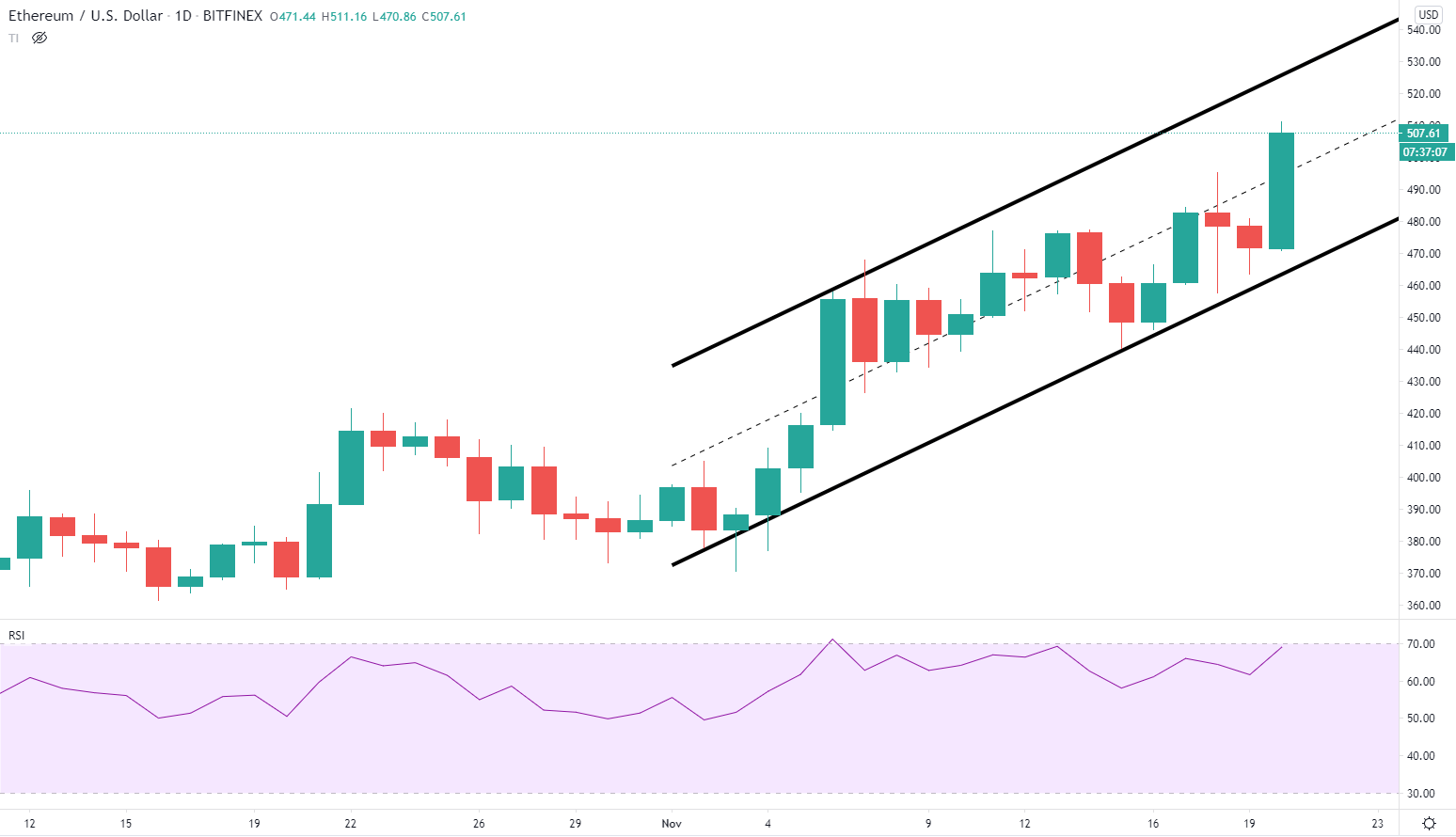 IntoTheBlock’s “In/Out of the Money Around Price” (IOMAP) model confirms $530 as a strong resistance area. According to the on-chain metric, more than 164,000 ETH were bought by nearly 300,000 addresses at an average price of $532.

Regardless of the optimistic outlook, the Relative Strength Index (RSI) is about to cross into the overbought territory, suggesting that Ethereum price could struggle to surpass the $530 hurdle and stage a correction. If this were to happen, the IOMAP model shows stiff support at $470, where more than 11 million ETH were acquired by 1.35 million addresses.

This price level coincides with the lower limit of the ascending channel, reinforcing the view that it may serve as a rebound zone towards new yearly highs.

Ripple (XRP/USD) sellers have returned this Sunday, as the recent recovery from sub-$0.50 levels appears to lose steam. However, from a technical perspective, it looks like the bulls have taken a breather before the bullish reversal picks up pace. Acceptance above the key Fib 61.8% hurdle is critical to take on the $1 mark.

Decentralized finance (DeFi) tokens are trying to catch up with the positive turnaround seen across the crypto board in the second half of this week. However, Synthetix, Compound, Litecoin have failed to benefit from the renewed buying wave.

Ethereum holders bracing for ‘sell the news’ ahead of the ETH 2.0’s launch?

Heading into the ETH 2.0 launch on December 1, the Ethereum holders remain wary over the prospects for the second-most widely traded digital asset. Following last week’s slide, has Ethereum’s time finally arrived or is it a sell on the rollout news?

Crypto markets witnessed massive volatility over the past week, marked by the stellar performance in Bitcoin. Among the top 50 widely-traded digital assets, Verge, Cardano and VeChain emerged as the top performers, with Verge up 40% on the week.