Bitcoin price broke out of a bear flag setup on May 6, leading to a 36% crash in a week. The BTC nosedive from an all-time high at $69,000 to $32,837 between November 10, 2021, and January 24, 2022, creating the pattern’s flagpole. Meanwhile, The consolidation in the form of higher lows and higher highs between January 14 and May 22, created an ascending parallel-like structure known as a flag.

This technical formation projects a target of $18,179, which was confirmed the moment Bitcoin price dropped below $38,305. 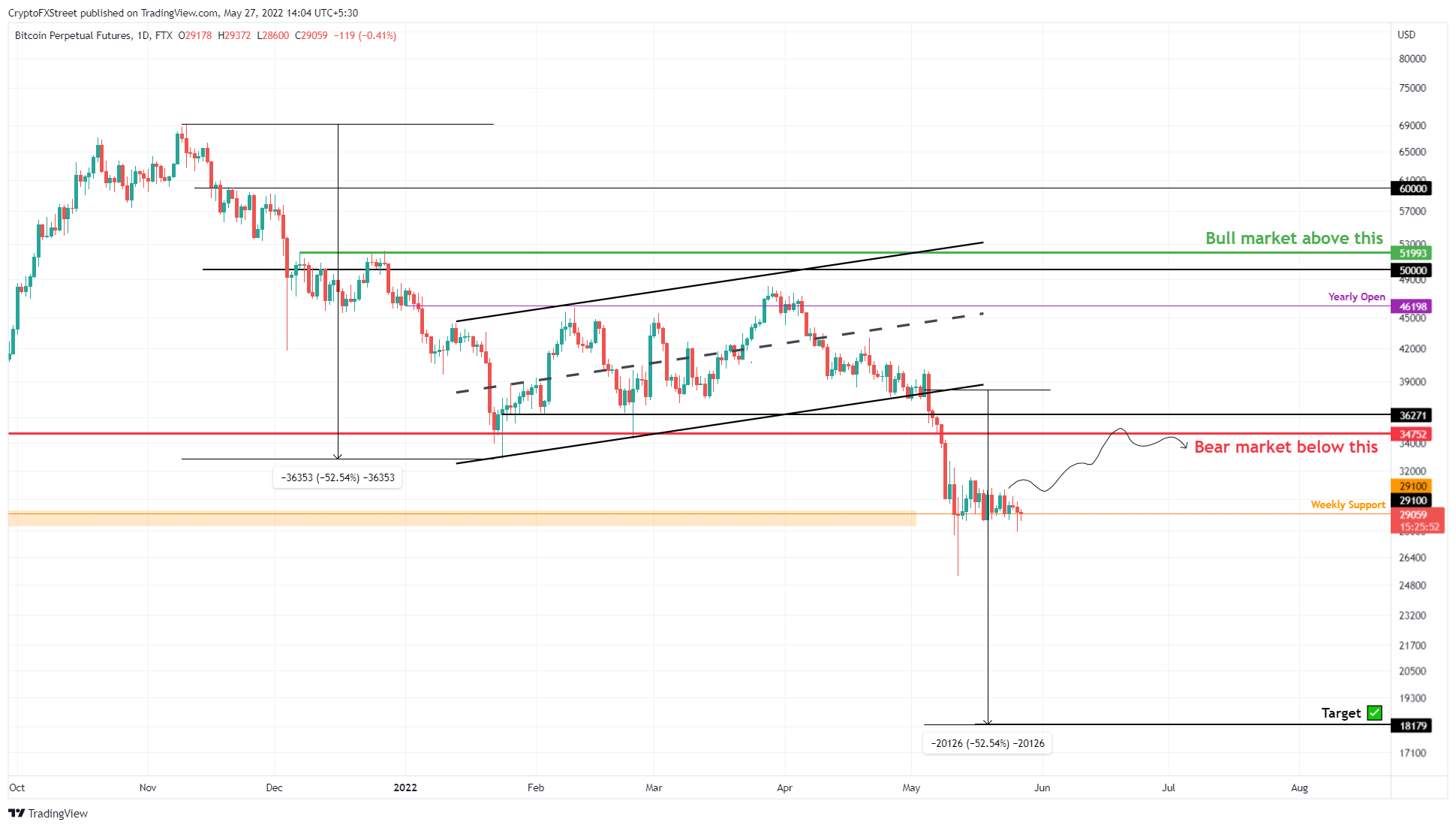 Thus far, the pause in selling has allowed Bitcoin price to consolidate around $29,147, just above the weekly support level at $29,100. A daily candlestick close below this foothold will trigger a further decline to the target at $18,179.

This move would constitute a 37% loss and is likely where sidelined buyers might come in to accumulate BTC at a discount.

Supporting this bearish narrative observed in Bitcoin price is the decline in the number of new addresses joining the BTC blockchain over the last year. The 7-day Simple Moving Average of this metric has tanked from 620,122 to 381,857 between January 9 and May 26.

This 38% slump in new active addresses joining the Bitcoin network suggests a net decline in investor sentiment around BTC and also indicates that market participants are not interested in BTC at the current price levels.

Moreover, the number of BTC held on exchanges has increased from 1.89 million to 1.94 million since May 2. This 2.6% increase in the supply held on centralized entities poses as a sell-side threat.

In the case of a flash crash, these holders could panic sell and add more pressure and exacerbate the downtrend. Therefore, this on-chain metric suggests that the odds favoring bears are on the rise.

Further painting a bearish picture for Bitcoin price is the lack of accumulation from whales. Interestingly, these high net worth investors are offloading their holdings. Wallets holding between 1,000 to 10,000 BTC tokens have dropped from 15,870 to 15,856, representing that 14 wallets offloaded their holdings.

This slump reveals that these investors are booking profits and also believe that a further discount in Bitcoin price could be possible.

Hope for a dead cat bound to exit

While most of the on-chain metrics are posting a bearish narrative, investors can clutch to one last hope, which is a dead cat bounce scenario. In this outlook, market participants can expect Bitcoin price to make a run at significant hurdles present between $33,000 to $36,000.

This move is likely to engineer liquidity for smart money’s short positions when Bitcoin price ultimately takes a U-turn. In such a scenario, late longers are likely going to be trapped holding their bags, which can result in a long squeeze.

That said, this quick run-up is a chance for retail investors to offload their bags at a much better price than now, at least until a firm bottom is formed for Bitcoin.

Only if this run-up extends higher to produce a daily candlestick close above the $53,000 hurdle, it will create a higher high from a macro perspective and invalidate the bearish thesis. Such a development will open the path for sidelined buyers to step in, potentially propelling BTC to retest its all-time high at $69,000.