In this article, we review the countries where Bitcoin has already enjoyed new ATH to find out the key growth factors and see how it is correlated with BTC adoption rates.

In some countries, BTC is much more expensive

As some sovereign fiat currencies' buying power has been collapsing, the Bitcoin price surpassed the previous peak values of 2017 and hit new records in those countries. They include such relatively big countries in terms of population and their share in the global economy as Turkey, Venezuela, Iran, Argentina, Lebanon, and Brazil, to name just a few. In some other countries like Russia and Columbia, BTC is fast approaching the peak as the fiat devaluation is gaining traction.

Below are the top-10 countries where Bitcoin now costs more than in December 2017.

The citizens report that in many countries like Argentina and Venezuela, the prices are actually high as due to currency exchange restrictions, people mostly use unofficial USD rates.

That would be with the official dollar exchange rate, which nobody uses because there are currency change restrictions.

The unofficial dollar is the most used, which is worth more than double. So, #bitcoin is approaching the ATH of 2 million pesos!

These six countries represent nearly 4.5% of the global economy in terms of GDP, with a combined population of almost 500 million. According to the Worldometer data, it is over 6% of the worldwide population of 7.8 billion people. While it may look like a tiny share in terms of statistics, there are real people behind those numbers. Nearly half a billion people of those who can claim that Bitcoin is a store of value for them.

Diving deeper, in countries like Russia, South Africa, Columbia, and Chile, Bitcoin is also close to breaking a new record high in local currency. This is significant as Russia, for example, with over 144 million citizens, accounts for nearly 2% of global GDP and 1.8% of the population.

A cryptocurrency investor and analyst Jason Deane calculated that Bitcoin has been close to its historic highs in at least 14 countries, meaning that people were making money most of the time.

Taken together with the others above, it means that 13.8% of the world's currencies have performed worse than bitcoin (or are just about to) and 953,321,799 people (or 12.20% of the entire population of the planet) would have been able to preserve their wealth better even if they had bought bitcoin at, or very close to, the top in dollar terms.

It is not all about inflation

All the above-mentioned countries have something in common. They are either crisis-stricken or under sanctions. Ailing economies with skyrocketing inflation figures amid economic sanctions imposed by the US or other large global authorities force people to seek ways to preserve value and retain access to the global markets.

Four out of six countries where BTC hit the new ATH are in the top-10 economies with the world's highest inflation rates. As FXStreet previously reported, investors tend to move to Bitcoin amid high inflation concerns.

However, local currency devaluation is only partially responsible for skyrocketing Bitcoin prices. In many economies, BTC serves as a store of value and a tool to bypass currency controls. In some cases, it solves the problems of financial inclusion and affordability of financial services. Nigeria is the best example, where almost a third of the population uses crypto to send money across borders and pay for everyday purchases.

How common is the crypto 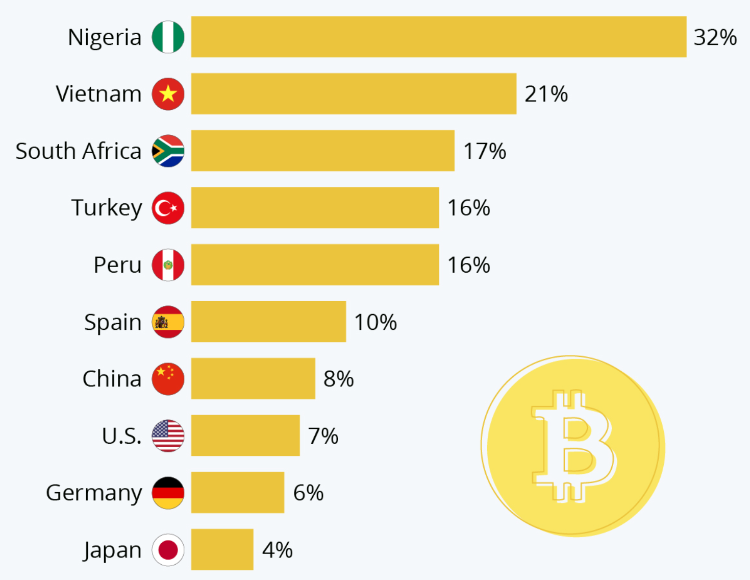 It is also a source of income and a mean of payment as people regard it as a more credible type of money than fiat printed by the corrupted or inefficient governments.

Thus, according to the Edelman survey, widespread lack of public trust is another significant driver behind cryptocurrency adoption. Bribery, cronyism, and low trust in the banking sector force people to seek alternatives, and they find Bitcoin. 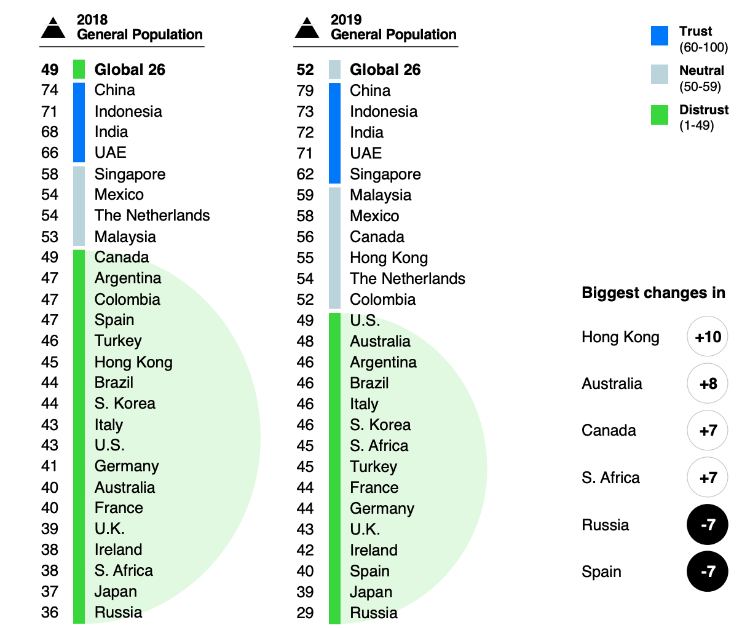 The recent Chainanalysis research produced slightly different results as, unlike Statista, it used on-chain metrics to estimate country-level cryptocurrency transaction value. The team analyzed 154 countries around the globe, and the results allow to conclude what drives cryptocurrency adoption in developing countries and how citizens use it to mitigate economic instability.

In some cases, even the governments start accepting Bitcoin as a payment for state services. Venezuela is the latest example, where the Maduro's administration allowed people to pay with BTC for passport applications and looked into collecting taxes in cryptocurrency.

At the time of writing, BTC/USD is changing hands at $12,950. The pioneer digital currency has retreated from the recent high of $13,250 hit on October 21. However, the upside momentum would remain strong as long as the price stays above the critical support level of $12,000, which previously limited the recovery since the beginning of August.

In and Out of the Money around the price data shows that the way to the north is the path of least resistance at this stage. There is little in terms of supply areas that may stop the price increase and trigger the substantial downside correction. If the current bullish momentum is sustained, BTC/USD may hit $15,000 in the nearest future.

On the other hand, BTC sellers will face a lot of barriers on the way down. The local support comes on approach to $12,500; however, the most significant barrier is located at $11,700 as over 1 million coins were bought around that price. This support line has the potential to absorb the selling pressure and trigger a new bullish wave. 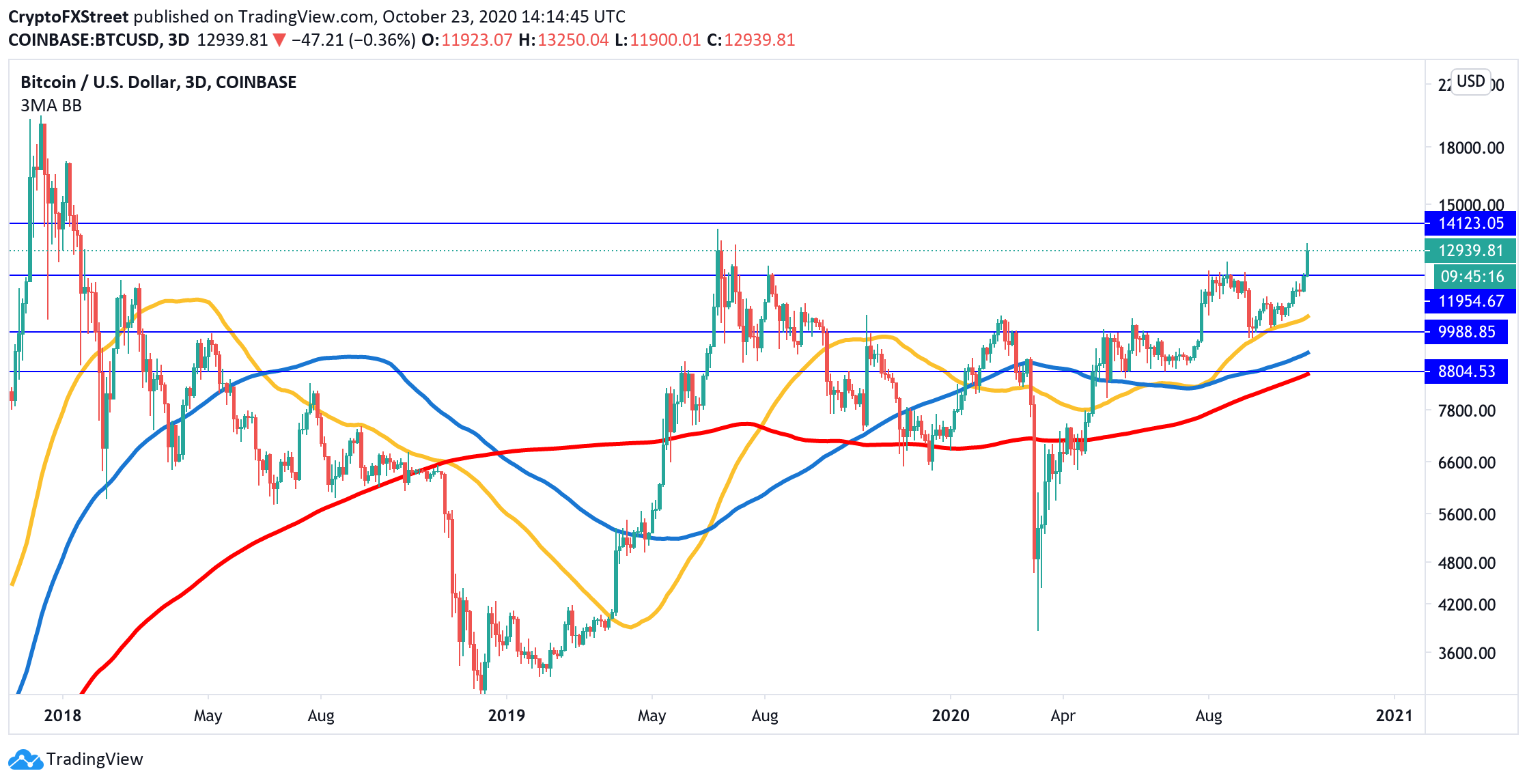 The technical picture also implies that there are no significant resistance lines until $13,860-$14,000 (this area includes the highest level since June 2019). Once it is out of the way, the sky is the limit for BTC.

Meanwhile, a sustainable move below $12,000 will negate the immediate positive forecast and allow for an extended correction towards $10,500 and $10,000.

The FXStreet Forecast Poll view on BTC/USD has improved significantly since the previous week as expectations on quarterly and monthly time frames turned bullish, while the weekly forecast is still neutral. Now the experts believe that the risks are tilted to the upside in the long-run, though on shorter time frames a downward correction is possible. The price expectations on weekly and quarterly frames stay above $13,000. It means that experts bet on a price consolidation within the current ranges.

ETC price is stuck in a tight range between two key Fibo levels on the 12H chart. Overbought conditions warrant caution but the coin defends key support so far.  Ethereum classic awaits fresh impetus for the next direction.