Bitcoin (BTC) prices briefly fell below $44,000 on Thursday as the United States Dollar strengthened after the U.S. Federal Reserve policy minutes revealed its intentions to limit its bond-purchasing program this year. 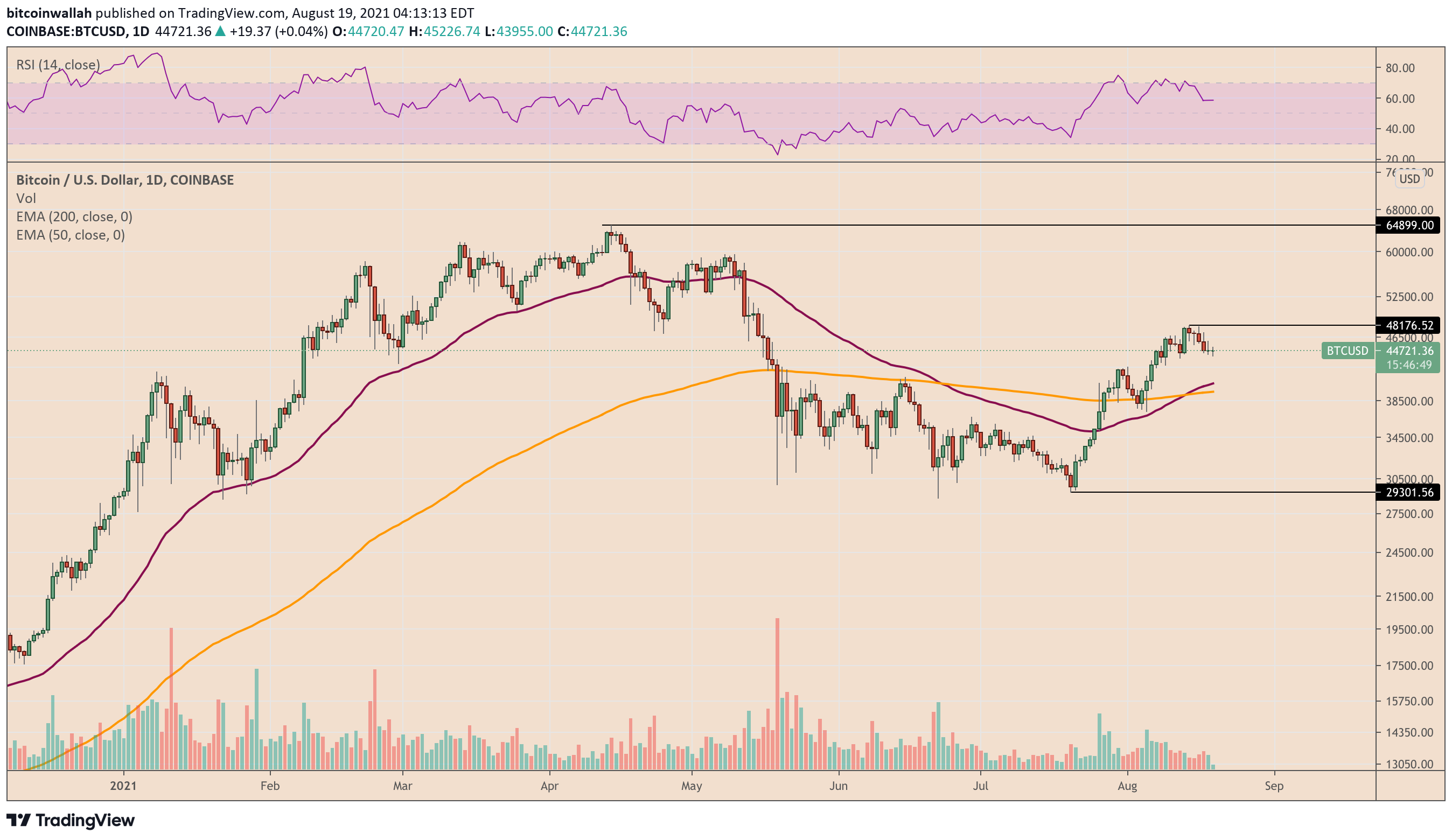 Bitcoin’s latest price decline also surfaced in line with a similar market bias on Wall Street. For instance, the benchmark S&P 500 index lost 47.81 points, or 1.1%, dropping to 4,400.27 during Wednesday’s final hours of trading.

Similarly, the Dow Jones and the Nasdaq Composite also plunged 1.1% and 0.9%, respectively. In addition, CNBC’s pre-market data revealed that futures tied to Wall Street indexes dropped on Thursday, hinting that the markets will likely continue their declines after the New York opening bell later on Thursday.

On the other hand, the U.S. dollar index (DXY) benefited from declining risky markets. The index, which measures the greenback’s strength against a basket of top foreign currencies, surged 0.39% to a six-month high of 93.50 before correcting lower by modest margins. 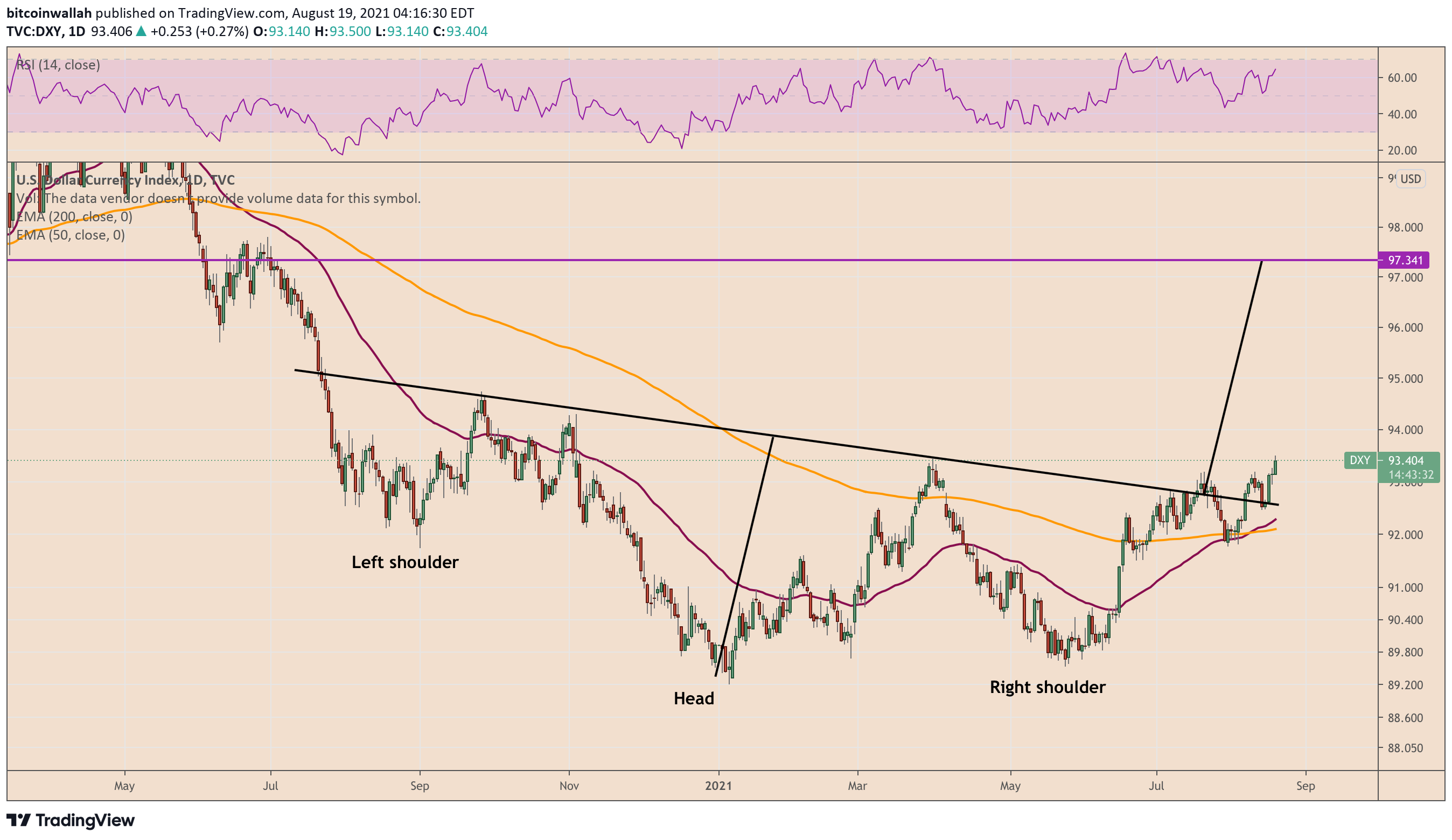 Most central bank officials agreed that the U.S. economic recovery is on the right path, which is an appropriate reason to reduce the pace of asset purchases. But they did not reveal when they should begin the tapering, with only three remaining Federal Open Market Committee meetings left to attend this year.

Officials also agreed that scaling back asset purchases would position them to raise interest rates should the economic recovery persist as anticipated. But they said that they want to see stronger evidence that the labor market has recovered from the aftermaths of the COVID-19 pandemic, the minutes revealed.

On inflation, the minutes showed Fed officials anticipating a temporary burst. They highlighted that their preferred gauge of inflation, after excluding volatile food and energy categories, was at 3.5% in June — a 30-year high — but anticipated declines by calling the upswing in consumer prices transitory.

In detail, excessive bond-buying ended up sending U.S. debt yields to a low of 0.66% in 2020. Even the bounce back recorded at the beginning of 2021 kept the yields near their record lows. The trend was the same across the globe, wherein the amount of debt offering negative yields recently stood at $16.5 trillion, a six-month peak.

Bitcoin, which emerged as a safe-haven alternative to the U.S. dollar and gold in 2020, also rose alongside the Wall Street index. In 2021, it has penned a record high near $65,000, with analysts crediting the Fed’s loose monetary policies as one of the leading catalysts behind its price rally.

But the biggest question remains of whether or not tapering will rotate capital out of the markets, which boomed during the period of quantitative easing, especially now Bitcoin that is sitting atop over 1,000% in profits following the Fed’s loose policy introduction in March 2020.

Jon Ovadia, founder of South Africa-based crypto exchange Ovex, noted that a declining cash flow from the Fed’s coffers would likely halt the growth of Bitcoin and similar risky assets in the near term.

“The factors that support the growth of Bitcoin, in particular, goes beyond just the Fed’s interference in keeping the economy healthy,” he explained, adding:

“However, on the macroeconomic front, Bitcoin investors will have to factor in the prospective impact and hang on to other fundamentals that abound in the crypto market to keep prices at record levels.”

Bitcoin will have refreshed record highs by Q1/2022

James Wo, founder and CEO of Digital Finance Group, called the latest price declines in Bitcoin and the equity market “reactionary” in nature. But he stressed that risk-on assets would continue their upward momentum in the long term due to inflationary pressures.

“Nominal inflation will take time to get back to levels seen before the pandemic,” he said.

Chiliz price dangles above abyss, ready to plunge below $0.14

Chiliz (CHZ) price could not catch a break over the weekend as social unrest flared up in China, battering trader sentiment on Monday morning in the ASIA PAC session.

Ethereum (ETH) price saw a lackluster weekend regarding its price action and performance. On Saturday, some hopes were there that the pivotal level at $1,243 could get a test, but bulls never made it up that far.

Bitcoin price saw a sudden sell-off on November 28 after a consolidative weekend. This bearish outlook comes as major protests erupt in China due to Covid restrictions.

Binance Coin price could be running out of gas to continue its massive rally. While the last five days have been exciting for holders, the following days will need to be closely monitored.