Bitcoin price sold off below $37,000 shortly after topping $40,500, leading analysts to caution that bears still have a few tricks up their sleeves.

Bull market optimism returned to the cryptocurrency market on July 26 after Bitcoin (BTC) price rallied above the $40,000 level for the first time in over six weeks.

Today's rally to $40,581 was a continuation of the July 25 breakout which saw BTC price rocket to $48,110 at Binance af a short squeeze resulted in nearly $500 million in shorts being liquidated in just two minutes.

Data from Cointelegraph Markets Pro and TradingView shows that BTC spiked to an intraday high at $40,581 on Monday before pulling back to $37,500 as bulls look to flip this resistance zone back to support in preparation for a further move higher. 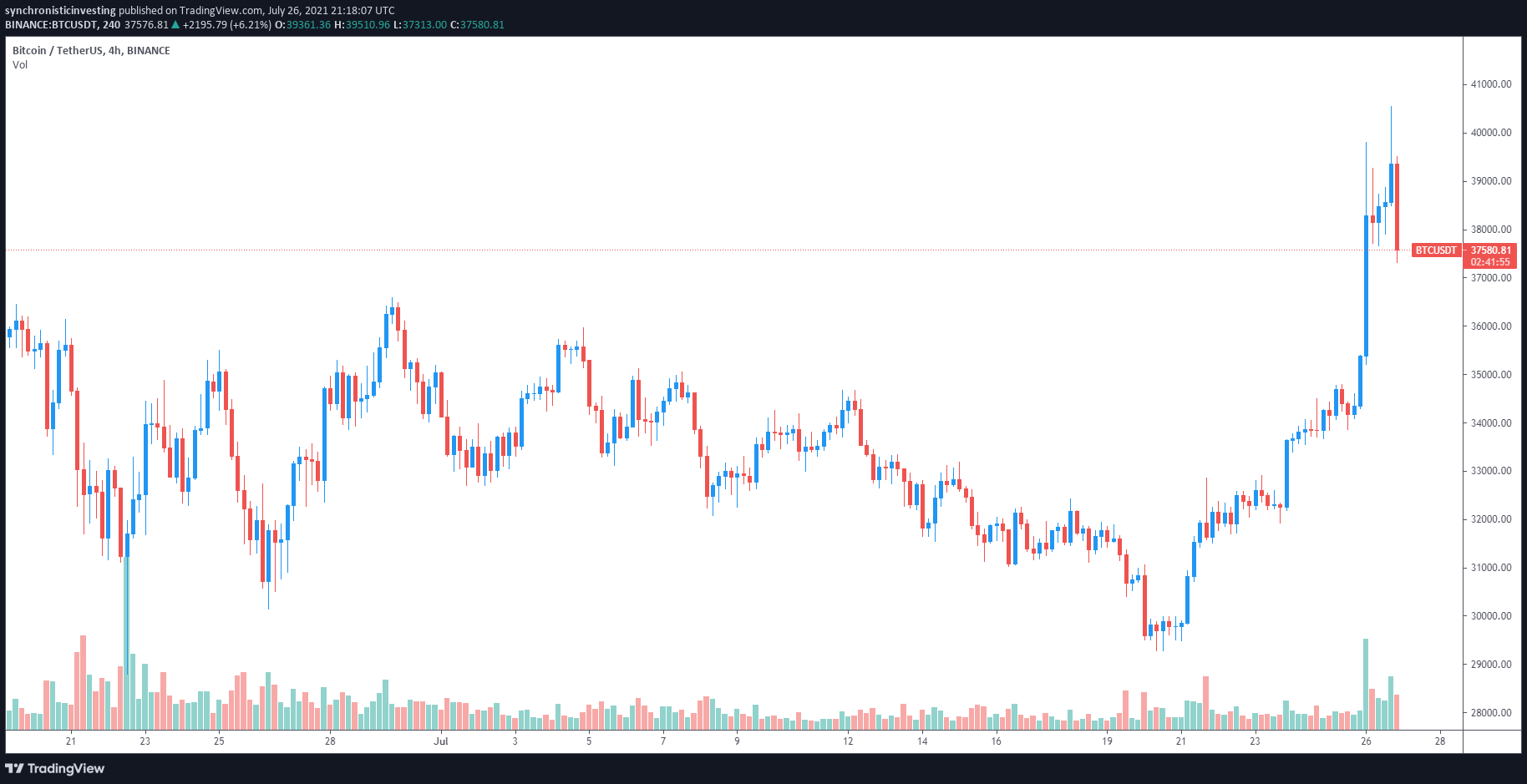 While the move higher has the mark of a trend change and has prompted some analysts to proclaim the bull market is back on track, on-chain data and the perpetual funding rates do not fully concur with this point of view. Especially when one considers that the current breakout may have only been the result of a massive short squeeze.

Factors that could reignite the bull market

According to Élie Le Rest, partner at digital asset management firm ExoAlpha, the recently denied rumor that Amazon would accept cryptocurrency payments have the potential to have a similar effect as the 2020 revelation from PayPal that it would integrate cryptocurrencies. Le Rest said that if the Amazon news turns out to be true, this “could be the catalyst to ignite a bull run in H2 of 2021.”

As Bitcoin price pushed above the $35,000 level on July 25, “more than a billion dollars of shorts got liquidated in the past 24 hours, with the bulk of the liquidation occurring in less than 1 hour” according to Le Rest, who also said, “the current market move could be sustained during the week by volumes coming from players having waited for a more directional trend on Bitcoin since the end of May.”

To validate this directional trend, Bitcoin has to break out of the $30,000-$40,000 range it has been stuck into for 2 months. Maintaining Bitcoin over the $40,000 level would signal that the “bear market” is over and the bull-run may resume.

If Bitcoin is able to maintain its current momentum, Le Rest said “as many expect, Bitcoin could get back on track with the Stock to Flow model and reach the $100,000 mark by year-end.”

On-chain data is not so bullish

Caution is warranted against being overly bullish and data from Glassnode suggests that several bearish threats remain valid.

When analyzing the directional bias of the futures markets, Glassnode found that “perpetual funding rates have continued to trade negative,” which “indicates the net bias remains short Bitcoin.” 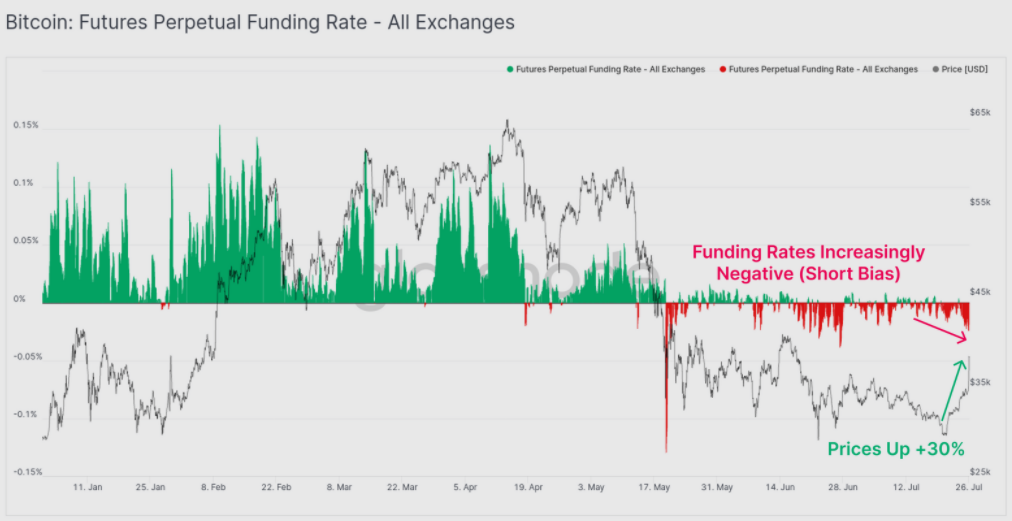 This metric in particular helps us identify that Monday's price rally is likely associated with an overall short squeeze, with funding rates continuing to trade at even more negative levels despite price rallying +30%.

Glassnode also pointed to Bitcoin on-chain activity and highlighted that “in direct contrast to the volatility in spot and derivatives markets, the transaction volume and on-chain activity remains extremely quiet.” 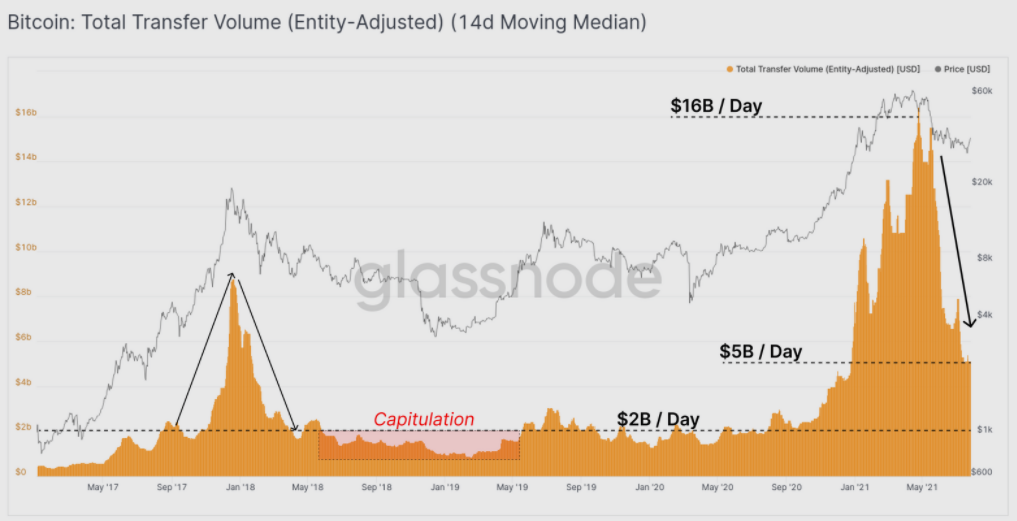 Overall, how on-chain transfer volume responds to the recent price action in Bitcoin will provide better insight into where the market is headed, but as noted by Glassnode, “it remains to be seen whether on-chain volumes start to pick up in response to recent volatile price-action.”