Dip buyers stepped in as Bitcoin price fell to $29,000 but analysts caution that China’s crackdown on BTC mining and a lack of buy volume mean the crypto market has not found a bottom yet.

Cryptocurrency investors found little reprieve on June 22 as the price of Bitcoin (BTC) fell below $30,000 for the first time since January, sparking panic among less experienced market participants who have yet to experience a full market cycle.

While Bitcoin has been under increasing pressure from multiple sources since early May, the most recent bout of selling has been largely attributed to capitulation by China-based miners who have been forced to abruptly shut down their operations.

Data from Cointelegraph Markets Pro and TradingView shows that after dropping to $28,800, Bitcoin price bounced back above the $30,000 level and currently trades for $32,600. 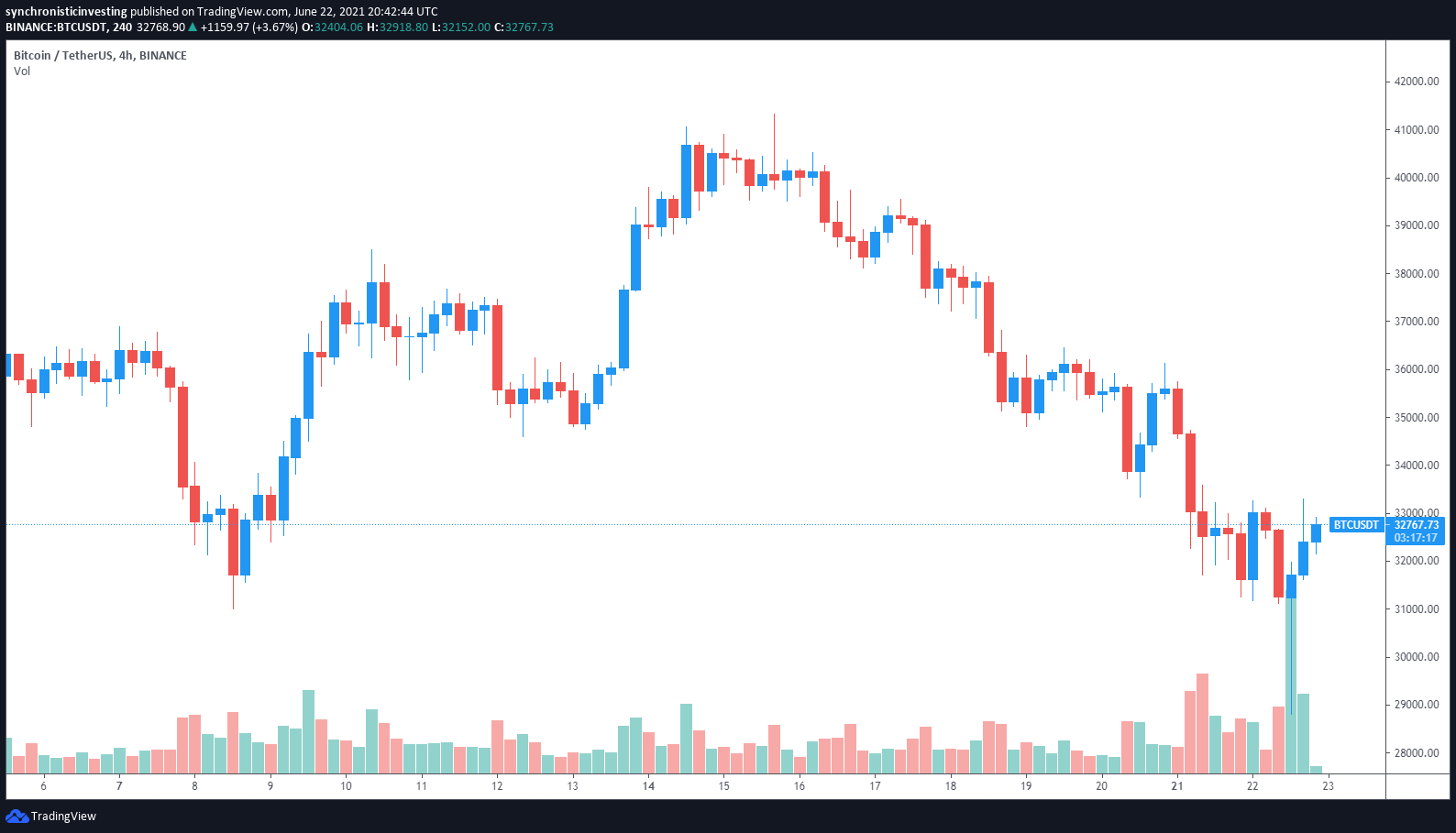 The strong bounce came after comments from Brian Nelson, the current nominee for Under Secretary of the Department of the Treasury’s division on terrorism and financial crimes. Nelson said he was going to make the implementation of new regulations around cryptocurrency a priority if he is confirmed.

The pressures put on Bitcoin and the overall cryptocurrency market was highlighted by Élie Le Rest, partner at digital asset management firm ExoAlpha. Le Rest told Cointelegraph that “Chinese market participants have been massively selling during the past month.”

Le Rest also pointed to the “Grayscale unlocking schedule leading to more selling pressure,” resulting in some panic selling by the less experienced traders in the market.

“With newcomers in the crypto market seeing their profit and capital getting wipe out by selling waves, newcomers are taking their loss as they can’t stomach this much negative volatility anymore.”

Due to these pressures, Le Rest believes that the market could range in the “lower tranches of $25,000 to $35,000” in July, with the low volume usually seen in August having the potential to “accelerate this downside trend or build the upside trend.”

The upside case for today's move was provided by David Lifchitz, managing partner and chief investment officer of ExoAlpha, who stated that the activity seen in the market on June 22 “seems to have drawn the line in the sand for BTC at $29,000 and Ether (ETH) at $1,700, given the swift bounce.”

That being said, Lifchitz warns against throwing caution to the wind as the volatile nature of the crypto market makes picking a bottom notoriously challenging.

However, it's too early to tell if this is "the" bottom or just a temporary floor before more downside. The lack of any upside catalyst (besides some contrarian oversold metrics) remains the biggest hurdle for cryptos to bounce back... Paging Mr.Musk, paging Mr.Musk.

The altcoin market followed Bitcoin’s lead on June 22 with a majority of tokens seeing double-digit losses as traders ran for the safety of stablecoins.

The price of Ether managed to rebound along with the price of BTC, helping erase a 15% correction and send the price back above $1,900.

Two tokens that managed to rise above the market turmoil and see positive gains for the day were Livepeer (LPT), which posted a 15% gain and Celo (CELO), which saw its price increase by 9%.