Bitcoin rallied to a five-month high Friday ahead of a monthly U.S. jobs report that could cement expectations the Federal Reserve (Fed) will start unwinding crisis-era stimulus starting in November.

Bitcoin rallied to a five-month high Friday ahead of a monthly U.S. jobs report that could cement expectations the Federal Reserve (Fed) will start unwinding crisis-era stimulus starting in November. The top cryptocurrency by market value rose to $56,100, hitting the highest since May 12 and taking the month-to-date gain to 27%. It was recently trading about $55,270. The U.S. non-farm payrolls (NFP) report scheduled for release at 12:30 UTC on Friday is expected to show the world’s largest economy added 500,000 jobs in September, more than double August’s 235,000 additions. The jobless rate is expected to have dropped to 5.1% from 5.2%, according to FXStreet.

Since the onset of the coronavirus pandemic in early 2020, bitcoin has become sensitive to critical macro data releases, like the NFP, influencing the Fed’s monetary policy. This time, however, the cryptocurrency could ignore the data, even if it beats estimates and cements the case for the Fed taper. A weak report would, in any case, be positive for asset prices in general.

The indifference is because the bitcoin market is currently focused on speculation that U.S. regulators will soon approve a futures-based bitcoin exchange-traded fund (ETF), opening doors for more mainstream money. The cryptocurrency appears to be on a solid footing, having decoupled from stocks and bounced hard from $40,000 despite adverse macro developments on institutional participation, as hinted by the surging premium in futures listed on the Chicago Mercantile Exchange (CME).

“Bitcoin is looking too strong here,” said Pankaj Balani, CEO of Delta Exchange. “The cryptocurrency has digested all the negative news that has come out of China in the past few weeks, which is a very positive sign.”

“There has been fresh spot buying activity in BTC, and looking at the price action, we expect to see a fresh ATH in the coming weeks,” he said, referring to an all-time high. The current record is $64,801, reached in April.

According to Singapore-based QCP Capital, there has been an overwhelming amount of outright buying in CME-based futures. “There are many reasons to be bullish; the stabilization of the Evergrande situation, possible upcoming approvals for BTC ETFs in the U.S., more traditional finance stalwarts like Soros Fund Management turning crypto-positive,” QCP Capital said.

Analysts told CoinDesk last month that bitcoin would remain resilient to any Fed taper. Being at the far end of the risk curve, bitcoin likely priced in an early end of stimulus during the May slide from $58,000 to $30,000. That was when the taper concerns first surfaced.

“The crypto [world] isn’t paying too much attention to quantitative easing [stimulus], and there is certainly a lot of money floating around the system, though, looking to invest in crypto projects at the moment,” Anthony Vince, global head of trading at GSR, told CoinDesk last month.

QCP Capital is cautiously bullish and foresees pullback if leverage, as measured by futures open interest, continues to rise. “BTC OI is reaching levels [seen in chart below] that tend to precede market sell-offs. We will start to be cautious of potential downside risk if OI levels continue spiking,” QCP Capital said in its Telegram channel. 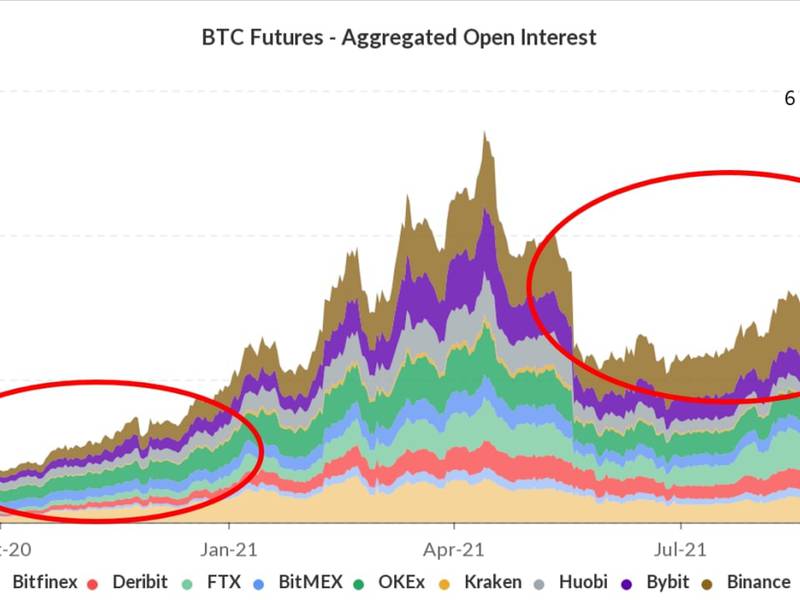 Open interest in futures contracts has more than tripled in one year, making the market more vulnerable to leverage washouts than a year ago.