Bitcoin has been in existence for more than a decade and has grown remarkably both as an asset used as a store value and a currency. A recent report by Arcane Research revealed that over 420,000 BTC is currently used as collateral for digital-backed loans.

On the other hand, another paper by BCA Research Inc. outlines that governments across the words are likely to create bottlenecks for the pioneer cryptocurrency, leading to loss of value with time.

Bitcoin used as collateral doubles in a year

Arcane Research, a platform focused on providing data-driven analysis and research to the cryptocurrency space, says that Bitcoin is coming up as a worthy collateral asset based on the combination of its unique features.

The bellwether cryptocurrency comes with no counterparty and credit risks, unlike the traditional assets such as government bonds and cash-based securities. Bitcoin is also "available for trading 24/7, 365 days a year, all over the world," in addition to its portability and divisibility features.

Currently, about 420,000 BTC is used as collateral to back various loans within the digital lending markets. Notably, this figure grew by 213,000 BTC from the fourth quarter of 2019 to the Q4 of 2020. Moreover, Bitcoin is used to collateralize over half of the lending markets' loans, but some industry experts argue the precise estimation is 70% to 80%. 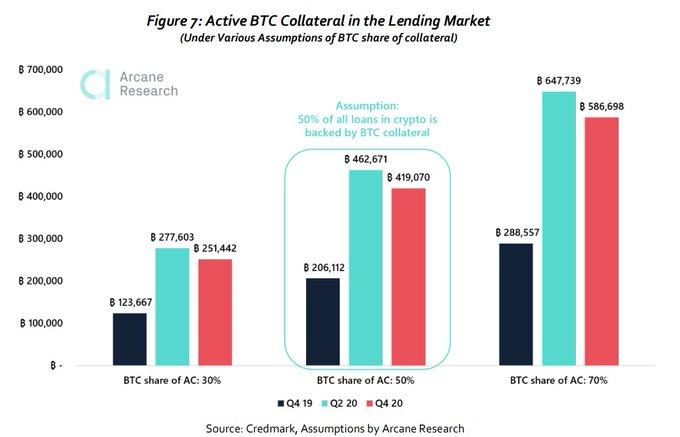 Strict government regulations could jeopardize Bitcoin value in the future

According to a BCA Research Inc report, governments are likely to tighten regulations for the pioneer cryptocurrency, a move that could negatively impact Bitcoin's future value.

The research firm reckons that Bitcoin is already disadvantaged due to the high cost and slow transaction, making it "unsuitable as a medium of exchange." Besides, it may lose the backing of environmentally focused, social, and governance funds because of its high energy consumption during mining. BCA Research argues that governments will bring up obstacles due to "the difference between the face value of money and the cost to produce it." Simultaneously:

Many companies have cozied up to Bitcoin to associate themselves with the digital currency's technological mystique.

As ESG funds start to flee Bitcoin, its price will begin a downward spiral. Stay away.

The 4-hour chart illustrates the formation of a falling wedge. A breakout from this technical pattern usually has a bullish impulse. Bitcoin rebounded from the weekend support at $43,000 and extended the up leg above $46,000.

The falling wedge signifies a dying bearish momentum amid a growing bulls' grip. If the breakout is confirmed, BTC will lift off toward $50,000. Similarly, the Moving Average Convergence Divergence (MACD) has a bullish bias. Bitcoin's uptrend is supported by the MACD line (blue) crossing above the signal line.

On the other hand, it is worth mentioning that Bitcoin is likely to face intense resistance at $47,000, which could invalidate the upswing. At the same time, declines will come into the picture if Bitcoin fails to hold above $46,000. On the downside, losses could stretch to $40,000 if the 200 Simple Moving Average (SMA) support on the 4-hour chart is shattered.