Spanish airline Vueling will begin accepting bitcoin and other cryptocurrencies as payment in early 2023.

"Ticket prices will still be displayed in euros". 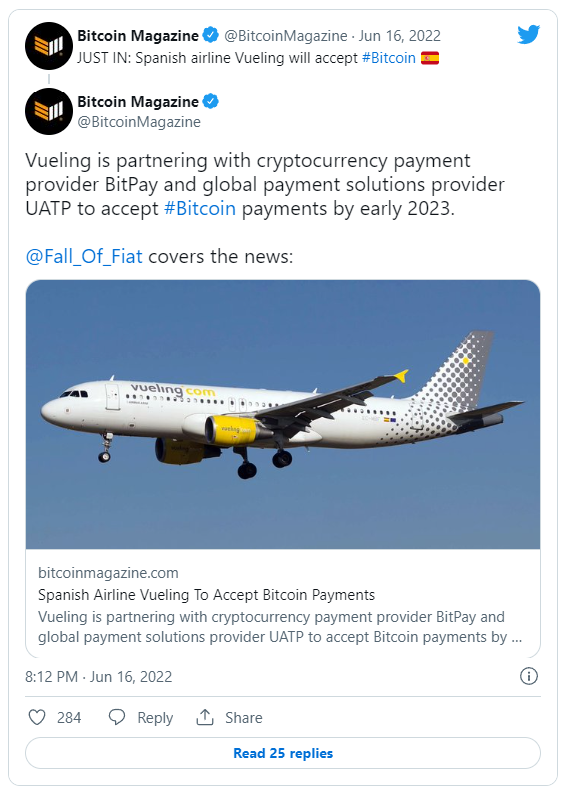 How much will the airline keep in Bitcoin and how much will it immediately dump for euros?

Think about this for a second.

Selling Bitcoin to buy an airline ticket, a boat, a coat or anything else implies the buyer of the boat, the coat, or the airline ticket now prefers that item over Bitcoin!

And on top of that, the Bitcoin seller has to pay taxes on their gains.

Hey, weren't we told it was irrational to sell Bitcoin at these prices? Those same people cheer nonsense of some random merchant accepting bitcoin.

Cashing out puts downward pressure on Bitcoin. And selling bitcoin to buy anything is cashing out.

There is a tradeoff, so it's not all one sided. The tradeoff is greater acceptance. But that tradeoff comes at a cost.

What price is the marginal buyer willing to pay for a Bitcoin?

The supply of Bitcoin is every coin ever mined minus lost keys. Every second, someone holding Bitcoin has to decide whether to HODL or sell to buy something.

Those not in or wanting more have to decide if they prefer $ or Bitcoin.

The more merchants that take Bitcoin (and don't HODL it), the more downward pressure there is as someone cashes out.

Of course, given that selling now is "irrational", why would anyone want to sell their Bitcoin for an airline ticket then pay taxes on the gain to boot?

Hoot of the day

1: It's irrational to sell Bitcoin
2: Hooray! More merchants take Bitcoin, it's going to the moon.

From a price standpoint, the best case for Bitcoin believers is no one sells their bitcoin to buy anything, yet they cheer when merchants accept it.

Either way, there is a hell of a lot of pressure on what the marginal buyer is willing to pay.