The well-known sports apparel company Adidas recently revealed a new partnership with Coinbase, calling it “probably nothing.” The German sportswear giant could be taking one step closer to accepting digital asset payments and an initial step into “metaverse apparel.”

Adidas announced its partnership with Coinbase on Twitter, adding that it is “probably nothing.” The sportswear giant has revealed little to no details so far, but it appears that the firm has taken a major step forward into the cryptocurrency and blockchain industry.

Speculation has emerged that Adidas could be partnering to enable crypto payments for the sportswear firm, bringing a potential digital asset payment integration to the Adidas ecosystem.

Recently, virtual Metaverse project Sandbox tweeted at Adidas, linking to a 144-parcel Adidas Original space on its platform. Sandbox suggested an arrangement for the two entities to “design their future together.”

SAND, the native cryptocurrency of The Sandbox, rallied after Adidas tweeted that it would be developing an “adiVerse” with the Metaverse platform. The sportswear behemoth even purchased a chunk of land on The Sandbox.

While Adidas could be dabbling in the non-fungible token (NFT) industry, the move would follow its rival Nike, which aims to bring its sneakers in the Metaverse.

Nike intends to sell digital products in the Metaverse, following years of research into tools that could enable the firm to engage in business in the Metaverse. The sports apparel giant secured a patent for “CryptoKicks” back in 2019.

The Sandbox token eyes a 57% ascent

The Sandbox token surged over 600% after Facebook announced its name change to Meta in October. The gaming platform reached a new all-time high on November 24 at $8, as the partnership with Adidas also fueled bullish sentiment for the token.

The Sandbox token broke out of the upper boundary of the ascending parallel channel on the 12-hour chart, putting a 116% rally on the radar, toward $11.76, coinciding with the 161.8% Fibonacci retracement level.

Before SAND is able to reach the optimistic target, resistance will emerge at the 127.2% Fibonacci retracement level at $9.68 as a test for the bulls. 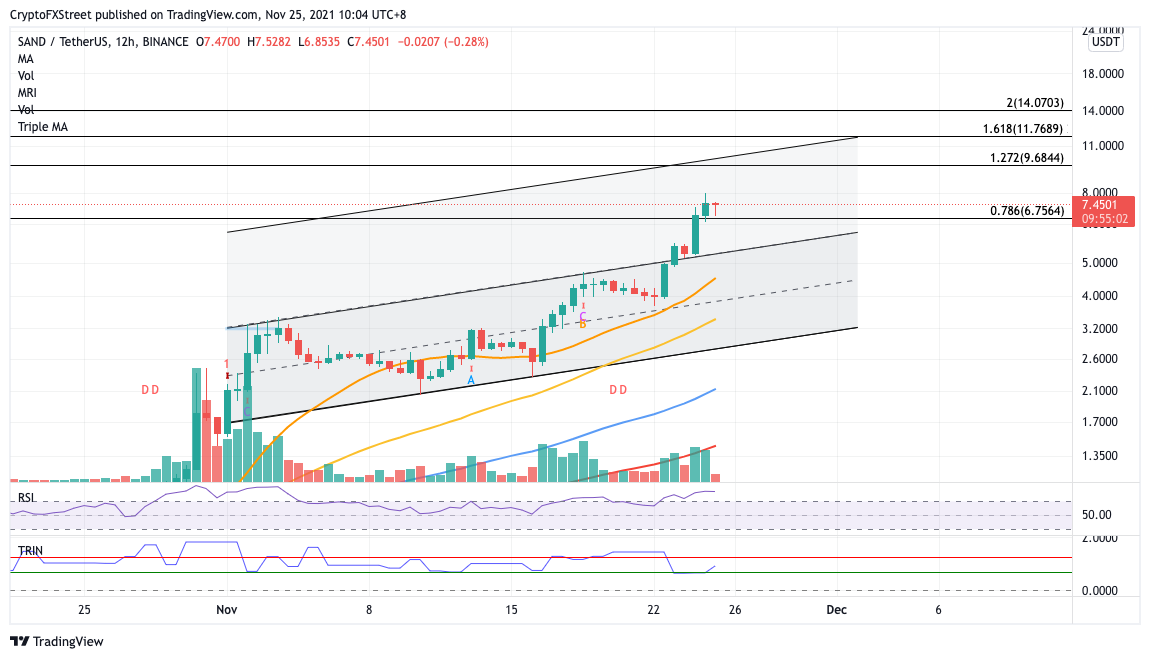 If a sell-off occurs, the first line of defense for SAND is at the 78.6% Fibonacci retracement level at $6.75, then at the topside trend line of the parallel channel at $5.37. Additional support will appear at the 21 twelve-hour Simple Moving Average (SMA) at $4.50.